Greetings:
Apologies, I have what once was known as Aspergers, now ASS.
So I get lost in the tonnes of info on the site.
Hence I came here, hoping someone could help me out...

I just got Directory Opus, Pro Trial version, V12.12? I think...?
I've always used Win File Explorer, though I always had severe issues with it.

Now I became SO frustrated with the continuity of issues I have, that I came to DO.
But it looks SO very different... which I, as autistic person, are very hard struggling with.
One of these issues is the File Icon Size.
In WFE I used Large, in DO Large is... all but large.
I have 16TB on data, the small scale of the File Icons is... well, it makes me cross-eyeing and leads to major headache.
How and where can I make these with the same size as I had on WFE?
Which DPI do I need to give them?
For the record: all 4 monitors are Benq SenseEye, 1920x1200 (Icons have this scaling ability, so I need to inform you on my 4x monitor resolutions, I think?).

Furthermore, is there a way to basically simply use the WFE UI?

I'd quickly update to the current version

[image] Directory Opus 12.23 is now available as a free update for all Directory Opus 12 users. New versions are often made available several days before they will be detected by the update checker. You can download Opus using the links below if you…

How and where can I make these with the same size as I had on WFE?

There is a slider that lets you finely adjust the thumbnail size: 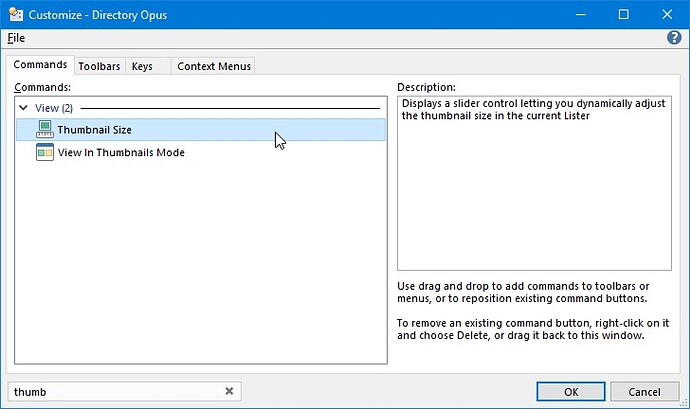 I will right away fix that.

Thank you for the help, most kind of you.

I got the installer about 3, 4 weeks ago?

One of these issues is the File Icon Size.
In WFE I used Large, in DO Large is... all but large.

You can then set the thumbnail size under Settings > Preferences / File Display Modes / Thumbnails.

(The thumbnail size slider should automatically appear when you switch to Thumbnails mode. You shouldn't need to add it to your toolbars, unless it was removed previously. That slider lets you temporarily adjust the thumbnails size in the current window. On the other hand, the Preferences setting is what you want to change to set the normal/default size.)

(It might seem strange that Opus and Explorer both have "Large Icons" modes that do different things. They used to be the same but Explorer changed over the years and now displays thumbnails, not just icons, when you select those modes, and the sizes grew larger as well.)

There are very good tips here, and if I might add a feature which I discovered not too long ago: Thumbnail column. I know it doesn't show file icons if there's a preview handler but it can be displayed in Details mode and its size is freely adjustable. 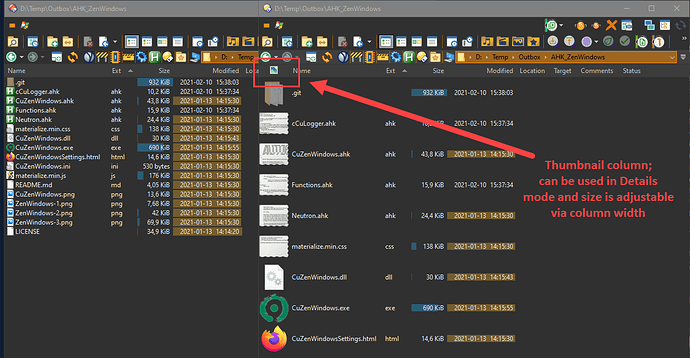 I set up a right click action in my "thumbnails" mode button, which toggles the column via Set COLUMNSTOGGLE=thumbnail(0). Or you could do something like: