An example of what I mean:

I have a folder named C:\Passwords with the following files:

I want File4.txt to always be automatically selected, instead of File1.txt

You could do this via a script that uses the OnAfterFolderChange event, checks the folder name, and runs the select command if it's the right folder.

If you need help writing a script, just ask!

Thanks for responding, Leo. If you have the time, I'd appreciate help with making a Lister select a specific file other than the first one. I don't know anything about scripting (yet), so any help would be greatly appreciated.

Here's a sample script. You should just need to change the path and filename at the top:

Download the .vbs.txt attachment, edit the top two lines and save the change, then drag the .vbs.txt file to Preferences / Toolbars / Scripts to install it.

Thank you so much, Leo. I appreciate all of the help you've given me.

I would like to use just one copy of your script that will auto-select the Outlook.pst anytime I go to a folder named \Outlook on any disk drive. I currently have created a copy of your script for each drive, but if it can be made to work like a File and Folder Label wildcard... is this possible? Thanks.

Easy enough. I've made it configurable: 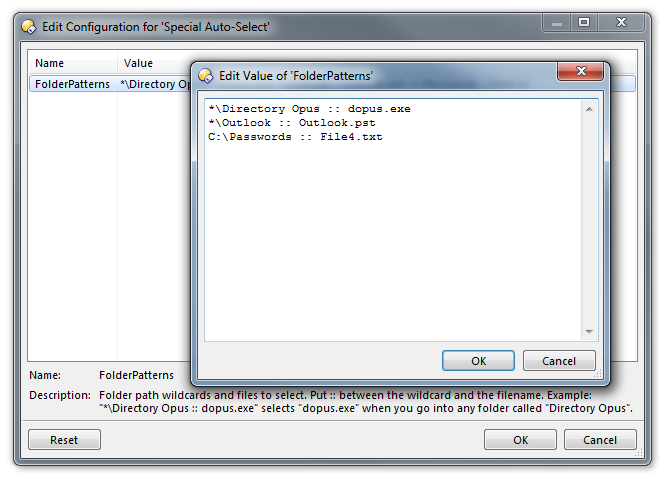 The new version can be found in the Script Add-Ins area, here: Auto-select certain files when entering certain folders.