I know this is an old topic and there has been some discusions about it, what I gather is that the "freezing" of the DO due to disconnected but still mapped Network Drives is due to the Windows itself reporting slowly/waiting the status of the drive for a long time (after updating to Win11, this time seems to be considerably longer, several minutes in my case).

Is there any possibility for the DO to not try to get the status of the drive unless the specific drive is activated/highlighted/clicked/opened?

I have several Network drives that need to be disconnected most of the day (due to VPN etc. issues) but still needed daily, and the Folder tree and File lister freezing for several minutes and not showing any drives until the one or more disconnected Network Drives have been timed out starts to frustrate me slightly.

Opening another DO window "helps" in some way but still the Folder tree is frozen and unable to expand and show all the drives until the Network Drive has timed out...

If there's any way to optionally disable the automatic polling/showing/listing of disconnected but still mounted drives in future versions of DO, that would be most welcomed! (Or if that function exists and I have missed it, please educate me

It's mostly an issue with Windows itself. We try to avoid querying network drives when we don't have to, but it's difficult to avoid entirely.

Not mapping drive letters to drives which aren't always there is best, if it's possible. You can still access their contents via the UNC path (\\server\share\... the one that the letter maps to) without needing a letter, and avoiding the letter removes most of the ways the drive might be accessed latently.

There are also options to prevent folder tabs from trying to load network drives (whether drive letters or UNC paths) when windows/layouts/etc. are re-opened, which can help if those are causing problems.

Which branch of the folder tree is slow to expand? This PC, or Network?

I have attached a screenshot of the Folder tree view I'm concerned about.

There should be 7 local and 6 network drives (Curiously 1 local drive appears on the list before the network drives time out, after that everything is fine as long as I don't close the DO window), and as soon as 1 network drive is disconnected the listing stays like this more then 3 minutes (might vary depending on something... position of the moon?)

I usually need to mount the network drives via letters because I have had problems with some software not accepting direct UNC paths, might have to try again this option.

ps. This whole time (several minutes) I have written this message, the Folder tree is still stuck...

Thanks for a fast reply! 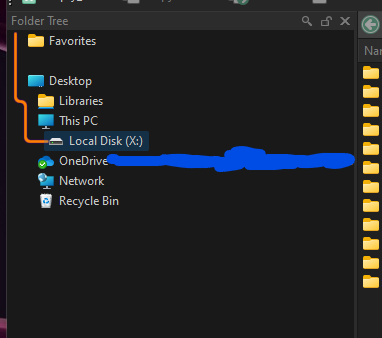 Disconnect Network Drive is part of Windows (Opus just asks Windows to open the dialog) so we can't improve that.

Does File Explorer's tree and This PC branch have the same behavior?

Dismounting via the command line (net use X: /delete) may work better, perhaps. A batch file which disconnects the problem drives would probably work without delay, although I don't know if it would help with things which are already waiting for a timeout. A similar batch file could re-connect them again when they're needed.

(It is a pain that Windows is still so bad at dealing with this, especially as it seems to be becoming more common, not less.)

I see... I might need to start using batch files then (One more thing to learn

"This PC" branch open the lister that works as expected even when the tree it self is frozen (As long as I go nowhere near the disconnected drive with any drag drop paths or similar). This was something that gave me the impression that the tree could/should be working as fast/well as the This PC lister.

Btw, I have used the DO since the Amiga 500 days and could not survive without it on Windows machines! Thanks!