Menu to Open a File Popup?

When I double-click on a PDF File the File will open in whatever the default program is currently.

My question - is there a way to have a selection popup when I double-click on a PDF File which would show both Acrobat and Bluebeam and I could choose which program to use at that time?
.

You could have a popup menu via scripting, but a much easier way would be to add an item for each program to the PDF type's context menu and then right-click the files to choose a program.

(Settings > File Types, to add things to those menus.)

A script would be much better because I always forget to right-click, the script would eliminate that issue. Is it hard to write a script to do this? How much would it cost?

The other issue is opening a file attachment, which doesn't give a choice to open in one of the two programs, it all opens in the default one.

The other issue is opening a file attachment, which doesn't give a choice to open in one of the two programs, it all opens in the default one.

File attachments inside other software? That would be more complicated to solve, if you need it to apply to double-clicks (or other methods of opening the files) outside of Opus.

The only software would be Outlook which I open attachments in. If that is a major scripting issue, I can work without that feature.

Is it hard to write a script to do this?

This add-in creates a new command LaunchPdf that will do this. You need to add the command in the File Types menu for the .pdf extension. 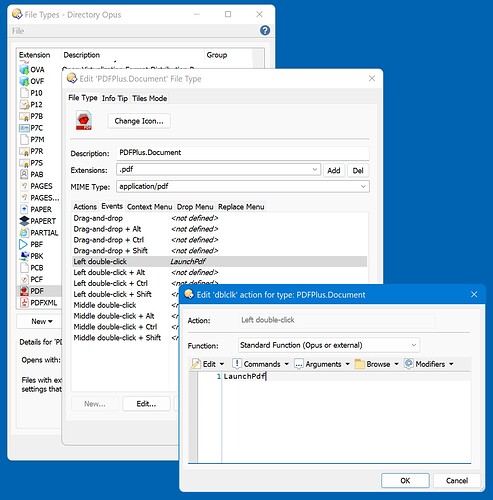 Copy CommandLaunchPdf.js.txt to /scripts (What are aliases?):

Pasting this into Windows' "Save As" dialog will take you directly to the right destination:

I Tried Your Script - Thank You Very Much for Your Time! 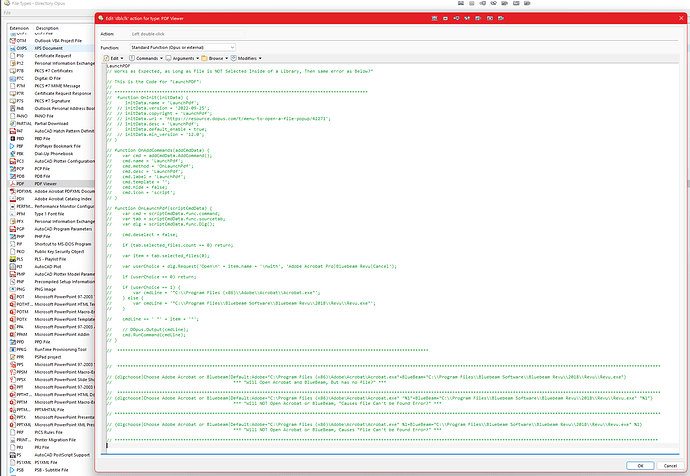 Not Sure why none of the scripts I tried will work?

Ah yes... the external programs get confused by Opus' internal file notation... I have updated the script.

Can you tell me why this will not function?

It seems to me that one of the above scripts should work?

This simple little script seems like it should work, and it makes a nice little menu.

Again - Thank you for your help... Joe Colburn

But Lxp's script will mean less clicking each time, so I think it's better, even if it's more lines.

Thank you so much to you both - both scripts now work PERFECTLY and just what I was looking for!!!

I am going to try both for a while and see which one feels the best, because thanks to you two, I can...

Happy Days for Sure - A nuisance in my day is no longer and with this added knowledge, I could become dangerous and fix other things...

I wish all the software companies were as Great as the service and responses I always receive from DO...