No, emptiness is all I see in those 'other' fields, whereas if I use the standard audio fields, they work fine.

Explorer shows the dBpa infotips, and contains the extra fields. So, how does one go about doing this? 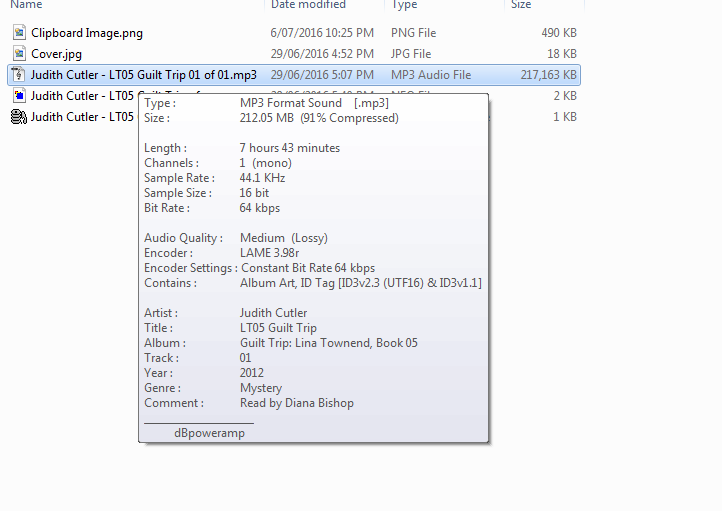 Oh, and while I am here, why can't you use the TAB key in the INFO TIP editor window? Or can you and I just don't know how?
The way I did it was to use Metapad to add tabs to a text file, then copy/paste that into the editor window. Thing is though, it doesn't line up. Here is what I pasted...

... all nicely tabbed, but if you look at the info tip pic in the thread, you will see that the field TRACK ID is indented one extra character. I had to do this to make my info tip line up nicely.

Can you find columns in Explorer that show the information you want?

Man, I didn't know there were so many to choose from. umm, I would have to say no, I can't find the ones I want there, though who knows, there are so many I may have missed them.

When you said the 'extra fields in Explorer' I assumed you meant in Explorer's infotip, not the columns themselves. I will have to play with these Explorer columns and see if any are of use.

I am guessing though that there is no way to use any of dBpa's info tips, and if so, I guess the question is can Opus have the AWOL metadata added in the future? Unless there is some other secret way of pulling out this info

The ENCODER, its settings, and maybe the CONTAINS fields are the ones of interest fwiw.

ah, I found one. ENCODED BY. Ok, this is a start. So how do I add this or other explorer fields that might turn up as I go through this long list?

You can already get that from Opus directly. {mp3encoder} in a tool tip.

If you do find any Explorer-only columns, the example script at the bottom of the 12.0.8 release notes shows how to import them into Opus. (No real scripting knowledge is needed, just change the names of things, although scripting can be useful to find out what the right names are.)

Nup, I tried that, I tried every single one in fact to see what I got. It doesn't work. Explorer shows LAME 3.98R, Opus says nothing.

er, want to give me a hand here? I could be here until v20 before I figure it out.

If you could maybe paste the script here using the 'ENCODED BY' example? And maybe a hint or two on 'how' to implement this? I really don't have the faintest idea how to use a script in this context.

Also, why don't the blank lines work? I might want to have some spacing, like the dBpa infotip in Explorer for example?

ok Leo, time for bed in the land down under. I am sure there will be answers galore tomorrow

Update: the {mp3encoder} field works, it just doesn't work as (I think) it should.

Both dBpa and the Media info shell extension, as well as MP3bookhelper, use the ENCODED BY tag to mean, "who was the person who encoded this", as opposed to "what actual encoder was used". Maybe this isn't right, but when I just glanced at another file that used this tag, I saw the previously BLANK field, now occupied with the encoder's name.

To complicate this, the Explorer column ENCODED BY, does NOT use the same tag, it uses whatever part of the metadata that shows the actual encoder used.

So basically this is more a confusion of what tag means what. In any case, none of the available Opus fields show the actual encoder (LAME, Fhg etc).

ok, ta, I have my answers, and so I will await the fix for mp3encoder, and possible addition of other metadata.

Mp3encoder isn't broken is it?

Well, it is either broken, OR Opus is missing a fairly important piece of metadata. Opus has no way of showing what codec did the encoding, which is what I would assume mp3encoder should show. Of course, the term encoder could mean either the codec or the person, so it is kinda confusing and I might be wrong, but wrong or no, Opus doesn't have a way of showing the actual codec, which is what I want it to do, and is what Windows is doing. Surely you can't let that happen!

The official line as far as I can find says...

TENC - The 'Encoded by' frame contains the name of the person or organization that encoded the audio file. This field may contain a copyright message, if the audio file also is copyrighted by the encoder.[/quote]

To further confuse this, Windows itself uses the column called ENCODED BY, to NOT show that actual tag, (which should be the name of the person who encoded the file) and instead shows the encoder used, which is what I am after. I want Opus to be like Explorer. 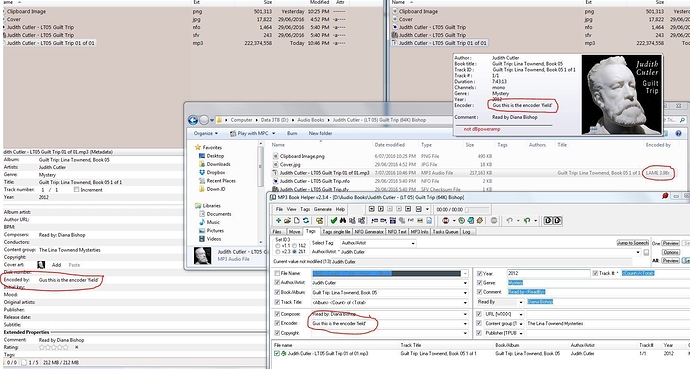 So windows is wrong because it should say ENCODED WITH rather than ENCODED BY, and Opus is wrong missing something, because it lacks the ability to show what encoder was used to create the file.

I found some more info.

Codec:
A codec is a device or program capable of encoding and/or decoding a digital data stream or signal. The word codec may be a combination of any of the following: 'compressor-decompressor', 'coder-decoder', or 'compression/decompression algorithm'. (Wikipedia)

Encoder:
An Encoder is a person or a software application, say manufacturer of the musicfile that has been generated or compiled by using some codec algorithm.

The ID3 documentation includes a section "4.2.2. Involved persons frames" describing an ID3 tagfield TENC:
The 'Encoded by' frame contains the name of the person or organisation that encoded the audio file. This field may contain a copyright message, if the audio file also is copyrighted by the encoder.

Mp3tag is able to display and change this TENC tagfield using the Mp3tag placeholder %ENCODEDBY%.

Mp3tag provides a read only information placeholder %_CODEC% that displays the name of the involved codec. As far as I know this technical codec info is not a tagfield of the ID3 specification.

So, Windows, dBpoweramp, and other things, are looking for this unofficial placeholder, and Opus isn't.

So we are back at the start. I just want Opus to be able to show the extra metadata that dBpa (and Explorer!) can. Not much of an ask?

You'll probably need to give us an example file.

Yes, I understand that it does Jon.

What code shows the actual encoder (codec) used? That is what I am after.