I had the .tif extension set to open in Photoshop. Today, it opened in the Opus photo viewer. When I went to "File Types" to fix it, there is no "tif" extension. 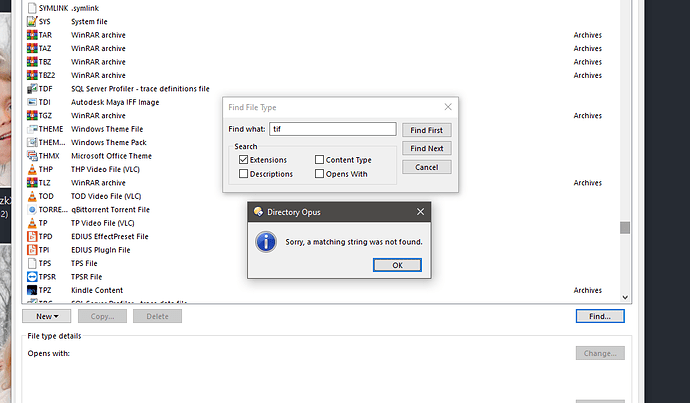 It got deleted. No big loss, though. Just create a new one. Or import the original:

File types are part of Windows, and often created or deleted when (un)installing other software. If a type that existed is gone, it’s unlikely to be related to Opus.

Note that Opus’s image viewer can recognise images without needing file types to exist, if it’s set to handle double clicks. So images opening in that doesn’t necessarily mean any Windows file-type exists for them.

Yes, I know how to recreate it, but it's the first time an extension has been deleted completely. About twice a week, I get very frustrated when my PSD or TIF files change in FileTypes without me installing anything new, and when I double-click, it opens in Opus image browser, and I have to reset it in FileTypes. That was something I was going to write about, but I didn't have time.

Opus doesn't go around spontaneously deleting filetypes, if that's what you're suggesting

I wish Opus had the same feature that Explorer has, where you right-click a file, choose open with, click "always open with this," and that's it—the file type would be saved in Opus to always open in that app.

It has exactly the same thing, other than that the Opus viewer can, optionally, override it.

If you don't want to use the Opus viewer, turn off the option in Preferences that makes it handle double-clicks on images within Opus. (There's a FAQ about this if you can't find it.)

But it sounds like your real issue is that something on your system keeps deleting and/or re-creating the involved file types. These things don't change by themselves, but some software will fight over them with other software.

Ok, if there's an option to turn off the Opus viewer and only use it for images, I'll look into that.

I don't think it's my system, because when this happens, opening Window Explorer and double-clicking a PSD or TIF file opens it in Photoshop. This means that the file type doesn't get deleted from my system - it just gets messed up in Opus File Types.

You said the TIF type was missing entirely, when it wasn't before the problem happened, so something must be messing with your registry settings.

Instructions for turning off the viewer can be found below. (Although I'm not sure what you mean by "only use it for images", since TIF and PSD are image formats?)

Overriding the image viewer used within Opus Whether or not Opus uses its own viewer for double-clicks on images within Opus is controlled by this Preferences setting: Preferences / File Operations / Double-click on Files: Use internal picture vie…

I misunderstood you. I thought I could just disable the Opus file view, but keep images opening in the Opus viewer. The link you sent me actually says that (at the end, where it says, "if you want the opposite..."). However, I like the Opus viewer settings and would prefer to keep it enabled.

I said that this was the first time "tif" was missing from Opus's File Type window, but it still worked in Explorer. The previous times, it would suddenly open in image viewer, despite being set to open in Photoshop.

There was nothing I installed or uninstalled that would cause this to happen.

For now, let's close this topic. Now that it is working, if and when it happens again, I will post the exact details of the settings, case, and registry.

Thank you for your time.

I said that this was the first time "tif" was missing from Opus's File Type window, but it still worked in Explorer.

It's possible (likely) that something else is changing your filetypes, and may have changed them in a way that means Opus no longer sees the type.

(Explorer is a bit more permissive of certain errors in the file types, like if the type itself doesn't actually exist but overrides on the extension do, for example. If the file class name the extension is assigned to changes, which typically happens when other software tries to take it over, it'll also remove the settings you add to the type in Opus, since they get assigned to the class, not the extension. Both point to something external changing the file type settings.)

Within the Opus file types window, you can use File > Diagnostic to save the relevant registry data into a file for analysis. Please do that and keep the file somewhere, and then if it goes wrong again do it again and send both files to us. We can then look at the two snapshots and see if anything changed.

It might also indicate what changed it, since programs usually name their file classes after themselves. For example, Photoshop assigns the tif extension to its Photoshop.TIFFFile.170 class or similar.

Given the number of programs that auto-update these days, I don't think you can say for sure that nothing you have installed would be messing with file types in the registry. A Photoshop update might take over the class one way, and an update to another tool that handles TIF may take it over in another. (File Explorer's "Open With" would still override both, if it was used, but the underlying class that the extension is assigned to would change, which would confuse things tied to that class, including changing the double-click actions in Opus.)

Edit: You can also look in /dopusdata/FileTypes (type that into the path field and push return) to see if there are multiple *tif* entries there, and which programs they mention. If there are, the type has changed from one program to another.

Within the Opus file types window, you can use File > Diagnostic to save the relevant registry data into a file for analysis. Please do that and keep the file somewhere, and then if it goes wrong again do it again and send both files to us. We can then look at the two snapshots and see if anything changed.

Edit: You can also look in /dopusdata/FileTypes (type that into the path field and push return) to see if there are multiple *tif* entries there, and which programs they mention. If there are, the type has changed from one program to another.

Attached is a screenshot of the /dopusdata/FileTypes directory, where there are duplicate TIFF files (Photoshop.TIFFFile.170, tiffile, and a weird "ImageGlass.AssocFile.TIF" - which probably is what causes tifs to open in image viewer when the Photoshop setting doesn't work), but I'd rather not mess with it since everything is working now.

I'm guessing this is because of my attempts to fix it. When I added the tif in opus, it appeared as TIF1 or something, and tif files still didn't work. Adding a new tif extension gave me a warning that said tif already existed (it didn't, only tif1), and asked if I wanted to add it anyway. I said yes. There were now two: tif1 and tif. As a result of deleting the tif1, the tif was also removed. Upon repeating the process a second time, it added the tif successfully and did not call it tif1.

As I said, everything is working now, and I saved the registry data, so let's leave it as it is. 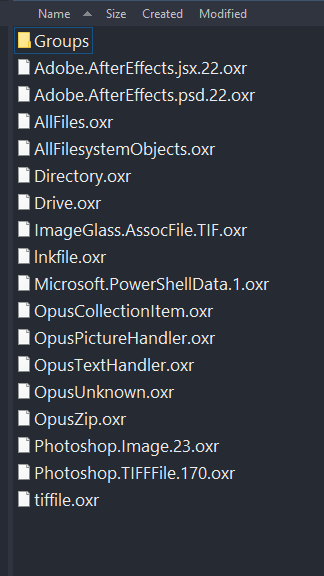 Attached is a screenshot of the /dopusdata/FileTypes directory, where there are duplicate TIFF files (Photoshop.TIFFFile.170, tiffile, and a weird "ImageGlass.AssocFile.TIF"

Image Glass is an image viewer for Windows, which must've been installed at some point.

Ok, I just installed a Photoshop update and something got messed up with psd files.
I exported the diagnostics again, but I don't think you need it, because I see what happened - I just don't know why it happened. I'll explain.

What Opus did, was duplicate the PSD filetype. It renamed the original one to PSD1, and the new one to PSD. The only difference between the two, is that in the new one, the double-click event is not defined. That's why it's not opening in Photoshop.

Why do you think it was Opus that did that? Opus doesn't go around changing the PSD file type, and it happened just after you had updated Photoshop, which does.

It sounds like you have two pieces of software (neither of them Opus) fighting over the file types in the registry, each changing the extensions to point to their classes when they are updated.

I'm a little confused. Would you mind telling me why you think Opus doesn't have this flaw? Which two pieces of software are you referring to?

There is literally no code in Opus which would create a .PSD file type on its own, that's why. We don't even create a JPEG file type. The only way Opus would ever create either type is if you went into the File Types editor, clicked New, and then manually typed in the extensions.

Photoshop, on the other hand, does create a PSD file type. And you can see if it's involved by the name of the file classes.

One of the programs is Photoshop, the other is probably ImageGlass which took over the TIF type, but I am only guessing there as I haven't seen the names of the PSD file classes on your system. But you've told us the TIF ones: Photoshop.TIFFFile.170 and ImageGlass.AssocFile.TIF are not things Opus created, they are things Photoshop and ImageGlass created. So there's strong evidence those two programs are fighting over file types, while there's zero evidence Opus is involved in any way.

Opus will show you the list of file types but that does not mean it was Opus which created all those types. Opus has nothing to do with most of them. Similarly, you can also list the same types using RegEdit.exe which comes with Windows. File Explorer used to be able to list them as well but Microsoft removed that functionality some years ago.

Ok, thank you for the explanation. I will uninstall ImageGlass since I don't use it anymore, and see what happens the next time I update Photoshop.