Another issue: I have been attempting to create multiple new folders at once as per the instructions here

I couldn't get it to work at all using comma-seperated lists as it says in the instructions, and it was only after a half hour of reading various bit and pieces that I came accross this post which compelled me to add the folder names in a vertical list... which works

Great, but a note to the developers that if this is now the method that should be used, then the linked documentation page appears to be out of date (unless I'm missing something?)

Now to my question, this has raised a new problem: if I want to also create a hierarchical tree of subfolders (using backslashes) at the same time as the top level folders, how do I now combine the methods to do it all in one go?

That is the Opus 10 documentation, which describes how that version worked.

If you're using Opus 11, you're reading the wrong version of the manual and want this instead: Creating Folders.

There isn't currently a shortcut (without scripting or similar) for creating a folder and then creating multiple folders directly below it (rather than nested in each other). You'd have to to A\B, A\C, A\D, etc. to create that kind of structure.

Now that you mention it, I see the big Directory Opus 10 heading at the top left. Don't know how I missed that, I just found the page through Google and assumed it was for the latest version! Thanks!

There is a handy link to the latest manual from the resource centre. 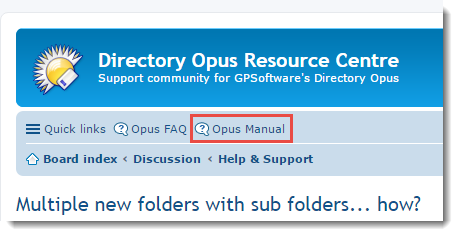 Or just press F1 in the program itself.

Or just press F1 in the program itself.

That's worth knowing! Thanks