This script was written for ME, and indirectly - maybe a little bit for Jon and Leo, since I've been a bit of a prick to them over the past few years since the old NavLock behavior from v9 was changed... So now they don't need to hear me whine about it anymore

. I had actually intended to finish this script LONG before now - I started this during the original v11 BETA's when scripting was first implemented, but hit a bunch of limitations at the time and put it to the side. But GPSoft have made so many awesome improvements to the scripting interface since then - it's time to finish the damn thing! Also, with having recently started working with multiple Opus configs for different environments, as well as using multiple monitors much more frequently than I used to - the fruits of the labor are enough to get me to work on it!

So ENOUGH preamble... however, just know that THERE ARE SOME ISSUES WITH THE SCRIPT... see next post for details!

What does it do?:
The purpose of this script is to provide an alternative to the built-in NavLock feature in Opus. The differences between this script and NavLock are as follows:

[ul][li]NONE: No action is taken when loss-of-sync occurs.[/li]
[li]CUSTOM: When set, the script will look for the Opus Command values set by the user in each of the SYNC_LOST_ACTION and SYNC_REC_ACTION script config options.[/li]
[li]FORMAT: The script will change the folder format of the linked tab(s) that lost sync to a user-defined favorite format that must be called 'navsync'. The user must first create this format themselves for this option to work.[/li]
[li]RESYNC: The script will attempt to automatically create the missing folder path(s) to automatically recover (really, prevent) loss of sync... If the attempt fails, no obvious action is taken other than any errors that might be thrown by the failed attempt to create the folder.

NOTE: This behavior can also be triggered on-demand by the NavSync RESYNC command.[/li][/ul]
Multiple Lister support:

THERE ARE SOME ISSUES WITH THE SCRIPT... see next post for details!

Appreciate any and all feedback!

As mentioned above, THERE ARE SOME ISSUES WITH THE SCRIPT

Firstly, the scripts behavior after sync has been lost, and particularly after a RESYNC operation has been performed - attempts to preserve the back/forward history of the sync'ed tabs involved, but once you've gone out of sync - depending on how many levels down you may have gone before manually triggering a RESYNC - then going BACK in the out-of-sync tab can goof up the ability to preserve back/forward history at the same time between the tabs.

In addition, though I really like the FORMAT behavior of the script, when encountering the sort of situation above (and a few others) it can happen that even though you are properly in Sync (folder changes continue to work between linked tabs), you may see the sync-loss (navsync) format in one of the file displays. It's usually just because Opus is "remembering" the format that folder had when I set to the sync-loss (navsync) format, and is just re-applying it like it normally would when going back or forward to that same folder. I may switch to reverting the format BEFORE changing paths on sync-loss recovery to solve it, just don't want alot of visual jerking around...

Not so much an 'issue' with the script - but a side effect of all the code running after the "source" tab has already switched folders... there is a noticeable LAG in the linked (destination) tabs folder change. I may consider re-implementing this as an OnBeforeFolderChange event handler script to improve that in the future.

The script works just fine with LINKED tabs, I use it myself. However, things get real screwed up if the linked tabs are also SLAVE tabs. The script will look to see if any of the tabs it's being asked to sync are slaved... and abort if that is the case (at least when trying to toggle it ON). I have to add a similar check to abort if NavLock is enabled. I meant to do that before posting the first release - but forgot

So here's my lister when I go out of sync - with NavSync set to use the FORMAT control:

Particularly since I am making folder changes to the SOURCE tab (on the LEFT) and ~want to be doing so, I prefer the notification about going out of sync to appear in the DESTINATION tab. I don't want the notification to visually disturb me in the SOURCE - where I'm still actively working.

Here's what happens in the same lister with NavLock: 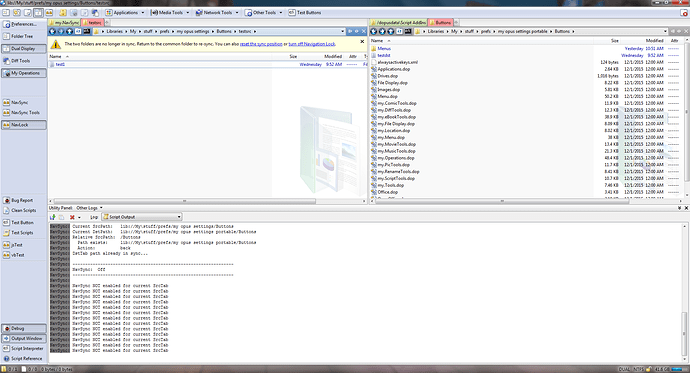 With NavLock, the notifications routinely ruins my navigation when I am muscle memory clicking through the first or second sub-folder in the source display. I'll often hit the Name column and resort the list because of where the notification drops down.

And here's what happens in the same lister with the linked tabs set to slaved as well (denoted by the italicized text in the tabs): 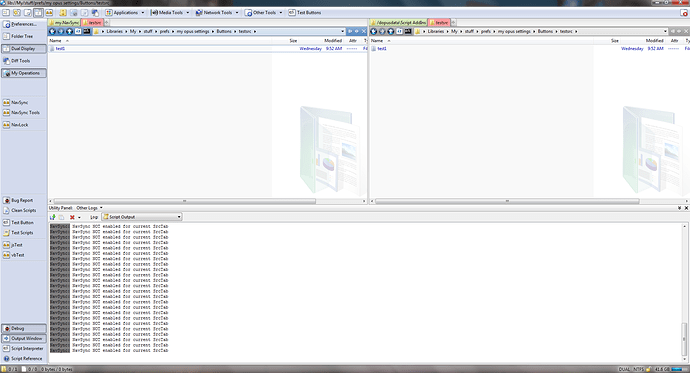 I don't really understand why - if having opened DIFFERENT folder paths to begin with - it's ever useful to all of a sudden have both displays show the same folder. But to each their own... I could certainly implement that in NavSync as an additional option, with the upshot that the BACK/FORWARD histories should then be preserved much more easily than my script can manage after loss-of-sync conditions at the moment.

Anyway, this was just an example visual explanation of the differences in behavior between the built-in features vs NavSync. If other ppl care to give it a try - I can certainly add other ways of handling and recovering from loss-of-sync. Perhaps some ppl like message popups

Yeah, an OnBeforeFolderChange variant of the script is alot smoother visually. Needs some additional work before ready for posting...

Also noticed when my laptop was particularly busy thrashing disk or cpu that new tabs in newly opened layouts would sometime linger on 'Empty Tab' state before filling in having read the folder. To be fair, it happens even without the script, but I added a first check for Tab.initial to try and speed things back up when launching new listers. Seemed to help ~marginally.

There are also some logic changes - where I now revert the format as soon as I detect that the new destination/linked tab exists. I'm hedging bets that the folder read will work if the folder exists.

In light of that statement - it's worth noting that there is very little testing of this script when directories that exist can't be read in the destination (say perhaps due to permissions issues). Something I'll need to do something about sometime soon.

Also some logic changes in how loss-of-sync is handled. Still trying as best I can to preserve each tabs 'history'. As long as navsync is in fact in a synced state, the script will rerun whatever action changed the source tabs path (back, forward, parent, etc). But if sync has been lost, then changing folders in the destination will be an explicit 'Go PATH' action - thereby trashing the sync of the history between tabs.

I've posted several enhancement requests that would let me manage things alot better, as well as be useful for other scripting ideas.

Posted an update to fix some failures with Library paths due to the member folder "?" being in the path string and throwing off path comparisons.

Also experimenting with a folder format to be applied when setting NavSync ON, and when re-syncing... based on the clamor of requests for such from the one other user trying out NavSync - ROTFL...

This is one amazing script.

I have also mixed feelings about Navlock and Slave tabs...

I used to use Navlock, but I always found that the fact you can only use it with 2 tabs very annoying
Then I discovered Slave tabs, which works better for my workflow (I try to use only one lister, so I like to open other tabs then come back to my linked tabs), except I really dislike when It gets out of sync...

Here comes NavSync... which tries to bring the best of both worlds

The thing is ... I use Navlock or Slave tabs to navigate both locally and online (ftp servers) and that DOES NOT work with NavSync

an other thing I miss is the coloring and icons of the synced tabs.

Well anyway, big up to you and thanks for the script.
Hope maybe you can make it even better

do you have other scripts ??

Note that the behavior of slave tabs in Opus 12 is now identical to navigation lock (they are basically the same thing now, except navlock always works between the two active tabs).

Additionally navlock is much better at staying in sync (or getting back in sync) than it was in Opus 11.

(And for steje's benefit, the "out of sync" message is nicer too

i will try it right away

I've got some significant weirdness with this script in v12 that I'm hoping to chase down soon.

FWIW - Jon made some good behavioral changes to standard Navlock in v12 which I appreciate alot. In fact - there are times now when I have two listers open (1 on each of my 2 monitors), use NavSync to bind the two single pane listers together, then additionally open dual file displays in each one and enable standard Navlock within each lister to sync the two local file displays.

The result is I've got 4 file displays that are synced together. I don't expect many ppl to have the same sort of use cases as I have in order to appreciate the usefulness of this - and it's imperfect since it doesn't provide all of the NavSync features in all 4 file displays... but, I dig being able to do it when I have some data that I want to manually copy to 4 different drives that I know already have all the same dir paths (so I happen to know I won't have an out-of-sync condition).