No matter what I tried, I just don't understand how filter works because it has no effect here.

Could you post a screenshot with working filter for this case. 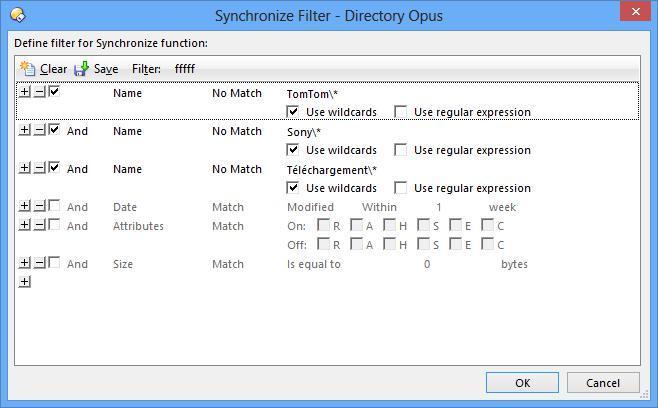 You're trying to match what look like partial paths using the Name clause, which doesn't make sense. The name of something will never contain a \ character.

Try the Location clause instead, to match on the parent path and not the filename.

The location/path won't match things like Sony* either, since no path will start with "Sony"; it'd have a drive letter or a UNC server on the front of it. You'd want *\Sony* or similar. Or probably *\Sony(|*) so that it matches things directly under the Sony directory as well as things under subdirectories of it

The How to filter items by location or sub-folder FAQ has more detailed examples and discussion. (Pay attention to the note about Sub-Folder clauses and synchronize, too. The third example in the FAQ is the best way to do it when using Find but will not work with Sync.)

Thanks a lot, it makes sense. This partially works for my case but this setting has some problems:

Any idea about how to exclude the empty sub-folders

I suspect that is unavoidable with the way the sync tool does filtering, but there might be a way...

Just one rule for testing, relative to the previous screenshot:

Weird that only empty sub-folders are selected to be synchronized.