When I have Opus open and and in an application, for example Lightroom or similar where I have the option of 'showing the file' outside of the application - ie open in explorer rather than the application itself it always opens by loading a new instance of Dopus rather than the instance I already have open. In other words simply jump to the folder and show the file in the already instance. Is there anyway to force Dopus to do that?

From the faqs: Always re-use a single window instead of opening new windows

I set the prefs according to this link you sent and this screen shot is the result. As you can see I have Opus already before I click the 'show in folder' choice of 4K Video Download. Another instance of Opus opens to show the folder. I would, if possible simply have that folder open in the instance behind. 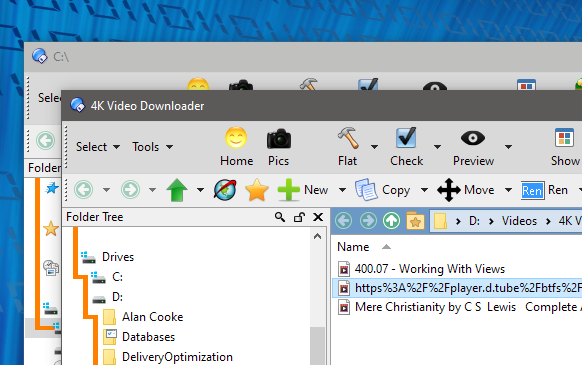 Just had a play with 4K Video Download and I see the same thing as you. It's probably due to the way it chooses to open the folder. The same thing happens if I set Explorer as the default. Not much you can do as far as I can see.

If you turn on "Open Explorer folders in a new tab" which can be found in "Preferences / Launching Opus / Explorer Replacement" then 4K Video Download will open in the current lister in a new tab which might solve the problem for you.

Dopus is so powerful with so many prefs I always believe an issue I have is me not getting to grips with what it can do I assume it's me not understanding things :-). So I appreciate your reply. I can sleep at night now :-). Iwill try the tabs idea but I have tended to stay away from tabs up till now. Onwards and upwards!