Since installing Vista x64 SP2, Opus crashes intermittently when right clicking on a folder in the folder tree :

Follow the steps in this FAQ and let us know what you find:

I'd like to add that DOpus 9.1.1.8 crashes Explorer.exe on both Vista SP2 x86 and x64 when right-clicking on the desktop.

I found out that the desktop context menu items are the culprit, so I disabled them and since then the problem disappeared.

Do you have any layouts defined? If so, what are their names? (Any with '&' or other symbols or non-ASCII characters in them, in particular?)

What other third-party/add-on stuff appears in the affected menu? Maybe the problem occurs due to a combination of Opus and something else. I've got the NVidia Control Panel, Tortoise SVN, Adobe Drive CS4 and DreamScene extra items in my desktop context menu so it should be safe to ignore them.

Installed Vista SP2 x64 on my laptop as well now and no crash on that either. That has an ATI item in the desktop context menu instead of NVidia, so that can probably be ruled out as a potential conflict as well.

I just realised that the root post's problem looks like the issue caused by a recent update to O&O Defrag:

Edit: I just realised I'd already linked to that thread.

Can people seeing the crash that W0lfdale reports say if they are using O&O as well? Then we know if there's a connection or if it's a separate issue.

Thanks leo, you directed me to the real culprit (may be the combination).
Actually both installs x86 & x64 were vanilla plus the nVidia Control Panel Desktop Context Menu Item, so I disabled the item implemented in the shell extension (nvshext.dll) and explorer.exe stopped crashing.

So, is it nVidia's or combination of nVidia & DOpus' problem.

You're right. Seems like it is triggered by the NVidia item.

I just upgraded to the latest 185 NVidia drivers and now I get the crash as well, having changed nothing else.

It's happening when the context menu is cleaned up which makes me wonder if it's a stack corruption. Difficult to say for sure, though.

Anybody on the 185 NVidia drivers but using Vista SP1 rather than SP2? Does the problem happen for you, or does it need the combination of Opus + NVidia 185 + SP2?

It's also worth noting that turning off the "Add Desktop Context Menu" option in the NVidia control panel isn't enough. The shell extension which adds the item will still be called even when the option is off, it just won't add anything.

You can disable it easily using ShellExView or SysInternals' AutoRuns tool (shown below).

As a bonus, after disabling the NVidia item the Desktop context menu will appear instantly rather than taking a couple of seconds. (God knows what the NVidia shell extension does which takes so long considering it only adds a static menu item!)

I'll look into this more tomorrow to try and see if I can prove exactly where the problem is. 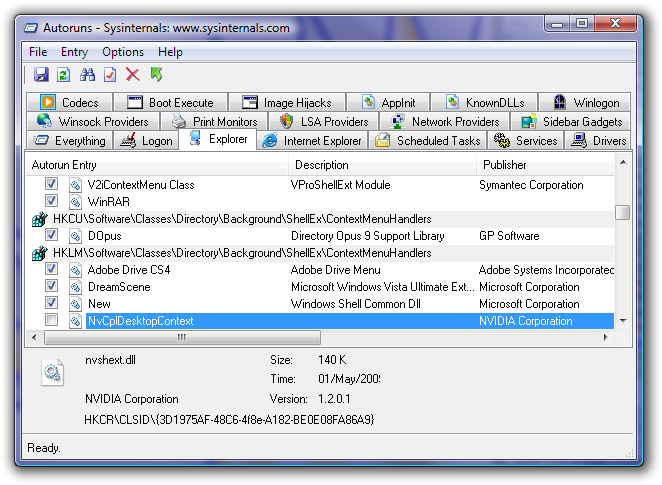 I'll look into this more tomorrow to try and see if I can prove exactly where the problem is.

After a long day of investigation we've found the problem and a fix has been written for inclusion in the next Opus update, which should be released fairly soon.

(Though you might like to leave the NVidia item disabled anyway, if you don't use it, as it causes the Desktop context menu to take about a second to appear.)

[b]A summary of this issue, along with better instructions on how to work around it for now, has been posted to the Opus news blog: