The direct download link is - lynx4d.com/cadpreviewimage/C ... wImage.exe
I tried placing the .dll file in “C:\Program Files\Directory Opus\Viewers” but the Dopus plug-in manager of course does not recognize it.

Thanks in advance,
Typo

Are any changes to this 'plug-in' really necessary? From what I could tell, all this thing does is add thumbnail support to Windows Explorer. Have you actually tried installing it and seen that Opus is not able to show CAD thumbnails? Make sure that the Prefs->Listers->Thumbnails->Use shell image extraction for formats Opus does not understand option is enabled...

If that does not allow CAD thumbnails to appear in Opus, I'm not sure who would need to do some work. There might be different ways to code a shell extension to facilitate thumbnail extraction... and perhaps there are ways of doing it that Opus does not natively 'pick up on'.

Excellent! Thanks Steje! The option to use shell image extraction was not selected.
Still loven Dopus.

Typo, thanks for starting this thread. I joined this DOpus forum with a few questions I hoped to find answers to, and "How do I view .dxf and .dwg thumbnails?" was the most important.

Besides viewing CAD thumbnails, what do you see if you try to look at a CAD file in the DOpus Lister Viewer pane?

which I learned about in a DOpus forum thread from 2005:

In the thread linked above, someone pointed out the program, calling it a "dwg Desktop and ActiveX viewer," but they said they had not tried it.

I have installed it & can confirm it works with Directory Opus 8.

Now I can preview my .dwg files and zoom in and out, but in thumbnail view mode, the thumbnails were the default icon, and didn't really show a true thumbnail of each specific file.

Now that I've installed the "CAD Preview Image" program you linked above, I can now also see thumbnails of these .dwg files.

I’m glad that helped you. I love the spread of information on forums. Never know who may be helped by a post. Thanks for the info and link to the Free Brava DWG viewer by InfoGraph! I will take a look at it.
To answer your question, when I view Rhino (cad like program) files in the Lister Viewer I just get a bunch of characters i.e. no picture. I don’t work as much in AutoCAD as I do in Rhino, so I haven’t experimented with the dwg thumbnails much but it would be very nice to be able to zoom in to the Rhino previews as you say you can with the dwg files. Is the zoom and preview capability do to the Free Brava dwg viewer?

Make sure that the Prefs->Listers->Thumbnails->Use shell image extraction for formats Opus does not understand option is enabled...

huh never noticed this option before. What extra thumbnails should I get from ticking this option? I've turned it on and i'm not getting any thumbnails for office documents e.g. word, excel. I have noticed I get thumbnails of pdf docs though, which is cool, but I turned the option off again and I still get pdf thumbnails so i'm not seeing any difference between it being turned on or off.

It depends what software you have installed, but if you get a thumbnail for something in Explorer then you'll also get one for the same file in Opus when that option is turned on.

The option does control PDF thumbnails. When you turn it off you're still seeing them because of thumbnail caching. You can clear or disable the cache via Preferences if you want to verify it.

Oh yeah I forgot about the cache.

In the help bubble text for that option it says " This option tells Opus to ask the operating system to display a thumbnail image for files it does not understand. This is useful for thumbnails from files such as HTML, WORD documents etc"

ATM I don't get thumbnails for either html or word doc files in explorer or opus and I have Microsoft Office 2003 installed. As it mentions it in the help text I assume there must be some way to get them to display?

Do you get thumbnails for those files in Explorer?

I'm not sure exactly what controls Explorer's thumbnail generation but if you don't see them in Explorer, and there isn't an Opus plugin to generate them, then you won't see them in Opus either.

I don't get office/html thumbnails in explorer either. The fact its mentioned in the help text for that option just got me thinking you could show thumbnails for those sort of files.

I wonder if setting Firefox as the default web browser is what removed that entry from the HTML filetype? 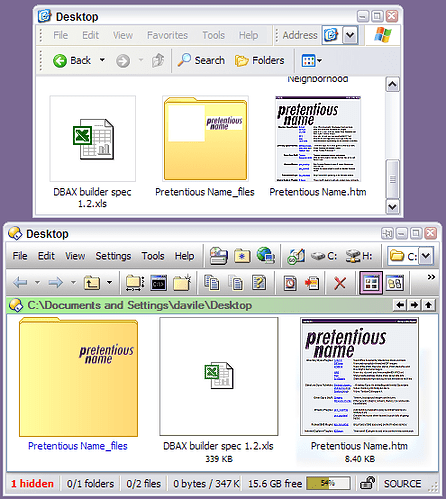 Confirmed. Should stick this in an FAQ, (with an advisory and a disclaimer of course).

I wonder if setting Firefox as the default web browser is what removed that entry from the HTML filetype?

I don't believe so. On the PC I'm logged in on right now I only have IE as a browser. I didn't have HTML thumbnails (in Opus or Windows Explorer) until I applied this tweak.

Come to think of it. I did install Yahoo Desktop Search on this PC once (to get the mutli-viewer .dlls). I subsequently uninstalled YDS. I wonder if there could be a connection there?

Yeah it works for me as well, very nice. Now if I can just find out how to get the Office (word, excel etc) thumbnails to work.

Come to think of it. I did install Yahoo Desktop Search on this PC once (to get the mutli-viewer .dlls). I subsequently uninstalled YDS. I wonder if there could be a connection there?

I've never installed YDS so I don't think it's that either. Curious!

Now that I'm home I see that HTML thumbs aren't enabled here, either. Maybe Microsoft themselves disabled the feature in a Windows Update? Perhaps there are security implications with automatically rendering HTML files which they thought the better of? I'm totally guessing though. It's weird as it's a nice feature.

I found newsgroup postings via Google which suggested the feature was disabled by default in Windows XP, but enabled in earlier versions of Windows.

The Brava free DWG viewer is surprisingly useful for something free. There are a couple of buttons which don't work in this unlicensed edition ("print," for example), but you can pan, zoom (by a specified %, or in/out or zoom by window), turn layers on and off, change background color, change image to monochrome, rotate 90 degrees, etc. It's fun!

I found an interesting discussion & solution (though I've not personally tried it yet) for showing thumbnails in Windows Explorer for Adobe Photoshop & Illustrator file types: