Removing app from the 'open with' 'available programs' list

i'm trying to adjust the 'open with' menu for a particular filetype. in the dialog box where these are set, on the right side is a list of 'available programs' to choose from. how can i remove entries from this list?

i need to remove entries because i moved some apps to another drive, but if i try to add the new .exe, DOpus tells me there is already an .exe of that name in the list, and won't let me add it. i want to remove the old ones and add the new ones.

i know i could change the .exe name, but i'd rather not do that...

The dialog displayed by the Open With menu item comes from Windows and I don't think has a way to remove programs.

However, Opus provides a way to remove them. Go to Settings -> File Types and find the file type in question. Click the Opens with: Change... button near the bottom and you'll see something a bit like the Windows Open With dialog but with a Remove button. 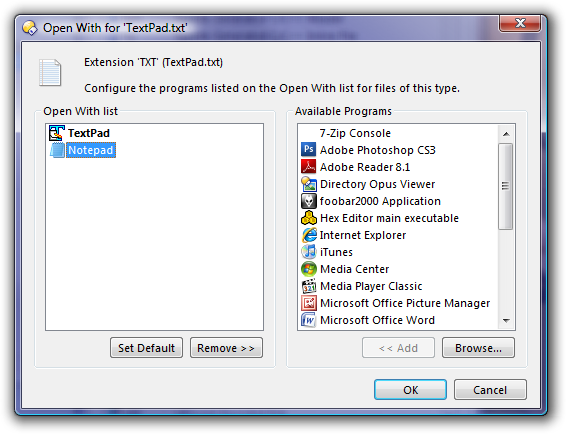 i'm trying to adjust the 'open with' menu for a particular filetype. in the dialog box where these are set, on the right side is a list of 'available programs' to choose from. how can i remove entries from this list?

You don't say which version of Windows you smoke, but does this help:

Using the dialog in Opus probably does the same thing as editing the registry (without the hassle).

leo, in the screenshot you posted, have a look at the right side of the window, in the area called "Available Programs". that's the list i want to remove an item from. i want to update my 'open with' list for a particular filetype with an exe in a new location, but i can't add it because the old one is still there...

i still need some help solving this one if anyone has any ideas. this list is generated by DOpus, so i'm assuming it's stored in one of the config files, but i have not been able to find it. i just need to clear the list so i can add a new program that has the same name as one already in there.

Didn't michaelkenward above already provide you with an answer? That link he provided tells you exactly how to do what you are asking.

In the middle of the page is the section you need to follow: "Using the Registry Editor to remove unwanted Open With entries."

Well, I'm pretty sure Directory Opus doesn't magically scan your entire system on its own to populate that list as you are assuming. It just fetches the registered apps from the registry, so to remove an app from the list, you need to remove it from the registry as described in michaelkenward's link.

Perhaps you should submit an official feature request. shrug

Powerful as it is, DOpus is not an operating system. It cannot, and I hope will not, futz about trying to second guess Windows on this sort of thing.

Here is one way to test your theory. Just go try the stuff at the end of the link I offered.

There is another way to get at the management of extensions in XP. That is to go into the stuff that you can find in Explorer and start to edit the things that come up.

Go to the "Advanced" bit and see what it throws up for the types that you want to change.

I'm afraid I am running out of other thoughts. (Easy when you have so few.) But if there was an obvious DOpus oriented solution to your predicament other than those you have already found lacking, I think we can safely assume that the resident gurus would have found it by now.

Which is why it might be worth reconsidering Plan B.

The list isn't Opus specific. It's the same thing you see in the Windows Open With window under "Other Programs." See below for screenshots from Vista and XP.

To change what's in that list you have to edit the registry. However, it's not mentioned in the article linked above (which I think just describes another way to modify the Open With list, not the Other Programs list).

HKEY_CLASSES_ROOT\Applications is the part of the registry you need to edit. Find the item in there which corresponds to the program you wish to change, then expand it and there should be shell\open\command keys below it. The default value of the command key specifies a command line to run for the program. The name of the executable in that command line is what appears in the Other Programs list.

Note that (at least in terms of the Open With window/lists) it does not matter what the item directly below HKEY_CLASSES_ROOT\Applications is called. It's usually called the same thing as the executable name but the name that's displayed in the Other Programs list comes from the command line value and not from the name of the registry key.

Note also that there are entries under HKEY_CLASSES_ROOT\Applications which don't appear in the Other Programs list. That's because they don't have shell\open\command keys below them. (That part of the registry is used for several different things.)

How did I work this out? I just searched the registry for something that was in the list of programs and then added a new entry to confirm that it was added to the list. 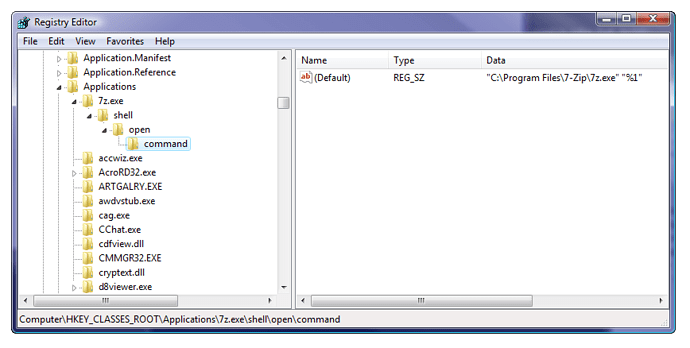 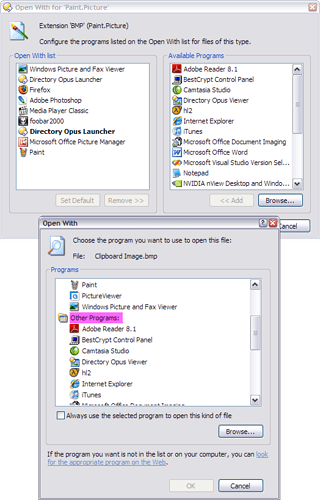 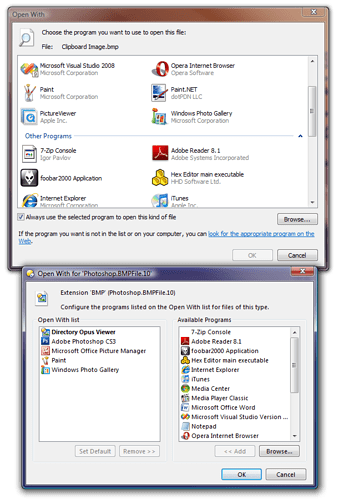 that sorted it leo, thank you. though i still had to fumble about with things, and found i needed to change the FriendlyCache string there also to get the name of the entry to change.

i had assumed that since i added the program to the list in DOpus, that DOpus stored the list itself, especially since it keeps its other filetype data in config files under /dopusdata. sorry for the mix-up