When I remove The OneDrive folders from the library using "remove folder from library" it works, but doesn't stick. After a reboot, they show up again. Any suggestions?

Note that I don't want to remove OneDrive from the folder tree, I just don't want my user libraries and OneDrive mixed.

That's something OneDrive and Windows are doing and not really Opus-related. Microsoft don't respect user choices and undo them automatically.

I don't know if there's a good way to prevent it, but I found lots of threads about it on TenForums, so maybe one has an answer: 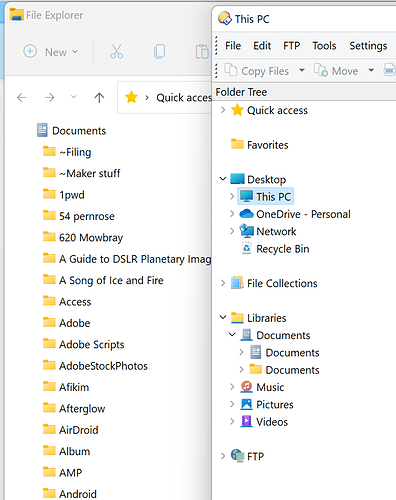 Turn off Preferences / Folder Tree / Contents, Libraries / Show member folders individually to get the same thing as in File Explorer.

(You'll still have the OneDrive folder contents in both programs. This just changes whether or not you can select individual folders from the library's top level via the tree.)

After introducing libraries in Vista, Microsoft started hiding them more and more from Windows 7 onwards.

I think this screen capture says otherwise, but I might be wrong. 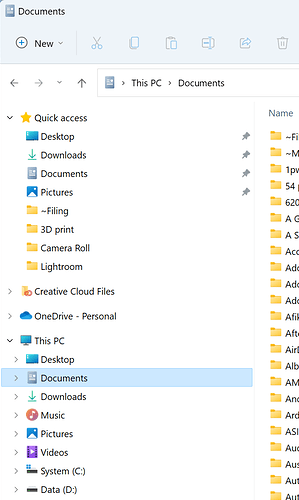 That isn't the Documents library; it's just a Documents folder.

Microsoft name several folders and libraries the same thing, to confuse you. (The same as there are now several real and virtual folders named Desktop that don't all show the same things but are hard to tell apart.) They have been changing which they show in their folder tree over the years. The thing you have selected in that screenshot is not the library. It's just an item in Explorer's tree which displays a single, normal folder.

This is one way to view libraries in File Explorer, and is fairly hidden these days: 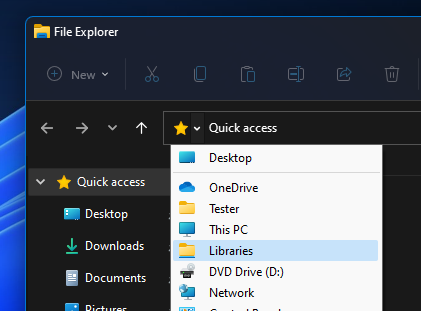 Also if you turn on the Show all folders Explorer option it will show libraries in the folder tree. 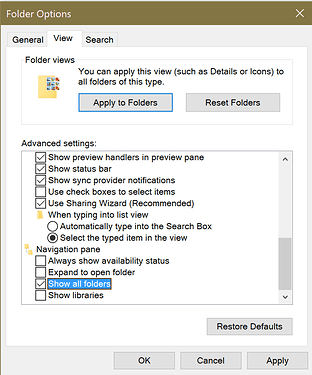 Ok, so on FE there is easy access to the library folders even without using the libraries feature. Is there an equivalent in DO? After all, that's what I actually want - whether the folders are listed under "Libraries" or simply under "This PC" doesn't make much of a difference.

If you want quick access to your Documents folder, you can add a button for it to your toolbar, or add it to Favorites, or add a hotkey for it, or use aliases to go to it via a short name, etc.

I didn't think I'd ever say that, but the way FE does it makes much more sense. It's basically the Libraries without the OneDrive integration. It would be great if DO did that too.

It's strange that one division of Microsoft forces OneDrive into the Documents library even if you remove it, while another division of Microsoft has decided to hide Libraries entirely by default, while also randomly changing which folders (and types of folders) they show at the top of the folder tree in File Explorer in every Windows release.

(At least the useless "3D Objects" folder they thought was super important to put in front of us in File Explorer is no longer cluttering things up after they gave up on that whole venture and abandoned their 3D object editing/viewing tools.)

We have plans to make the tree more configurable in the future, although I don't know if that will include showing arbitrary folders in arbitrary places. IMO, there are several far better ways to quickly navigate to commonly used folders than relying on the tree for that. The tree may need to be scrolled back to the top to get to a folder, while having a dedicated toolbar button for it means it's always there and one click away.

Thanks for those comments, @Leo. I'll wait and see what you come up with. Past experience suggests you'll come up with a good solution - I just hope it's soon...