Testing the functions in the Rename dialog using a Rename JavaScript, I was a bit surprised that you do not seem to be able to "pre-rename" file/folder names that then would get passed to the Rename script.

E.g. in some cases Modify capitalization, All Lower-case would be a convenient "pre-rename" for further renaming via script. It would also be convenient for the user to be able to easily change what gets passed to the script.

Strange I though I read that "pre-renaming" would work?

Note: In JavaScript it is trivial to lower-case a file/folder name, and that will be the way I will go, but I kind of like the idea of using the existing interface of the Rename dialog to do so.

Am I overlooking something?

Works fine here. Are you taking the filename from the wrong argument? If you want the pre-processed name then you have to use strNewName. 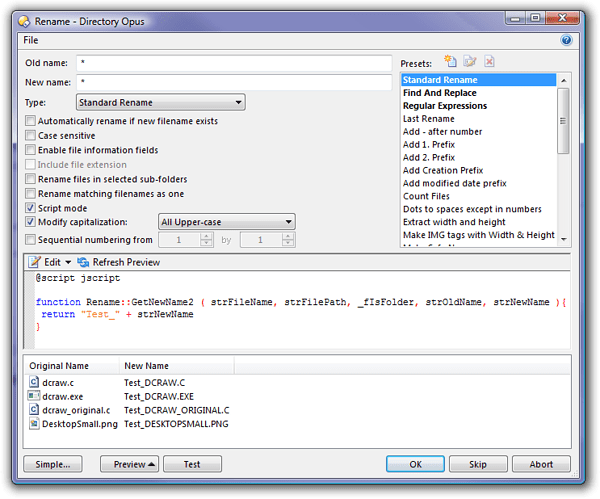 I had been wondering about the use of strOldName and strNewName. I thought these are merly the entries from the fields Old name and New name, in our case * and *...

Great, changed one variable and everything works. Neat.