Scan folders and copy/move a directory if it exists

The situation :
I have a large amount of folders that contains unuseful files in a directory named "archives".
I would like to scan all of these folders, and if "archives" exists, i want to move all the folders and files in it, elsewhere.

Thanks for any help

PS :
I tried to use the flat view to have all the "archives" folders grouped, but i use a too large amount of folders, the result of the flat view is a random result, with just a few of the folders selected, "flatted"...
let me know if you meet this problem too, and i will probably open a new thread for that

PS2 :
I read my post before submiting, and i wonder if i am understandable ??

You can use a copy filter to only copy files which are below an "archives" folder.

The filter to use would probably be this: 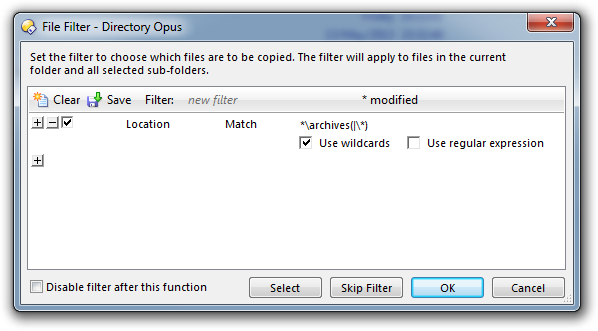 What that won't get you is changing the names of the folders and re-arranging the order that the parent folder names come in. I don't think there is a good way to do that as part of the copy.

Well,
The problem is that i don't want to have in the destination, my files in a "archives" folder, but in a folder named as the folder selected in the source (archives's parent folder).

So i tried this code :

Oh, and another question !
When i make my own buttons, i never know how to display the value of a variable, to debug and understand what happens

Ex : @set dir$={filepath|noroot}
Is it possible to display a variable value in a dialog box, or in DOS with an "echo", or in any other way ??

Try this (added "noterm" in the first part, and changed from TO to CREATEFOLDER so that it should work if the folder does not already exist):

If you want Opus to show a message box, you can use dopusrt /ArgsMsgBox like this. It will display whatever text you give it, so you can use it to see the command line which would be run:

(You can also use the DOS echo command when writing MS-DOS Batch buttons, of course.)

The problem was that the folder "archives" was created, and i didn't want that.
I didn't want to use all the path too, just the name of the folder (folder1 in my example).

So ! Finally i did this, and it works like a charm

Thanks for your help, and now i can't live without DopusRT /ArgsMsgBox