It would be helpful, if the currently used tab group would be shown by name, when saving it, or otherwise being marked as the current tab group, for example highlighted in red in the tab groups list.

Any thoughts about this problem? I would like to know, which layout to save, when i want to save the current set. There are like 20 different tab groups, so it is unclear, which one is the current tab group.

So you have closed the other thread in the off topic forum, a forum, where closing threads should not be necessary in case it was a harmless request. & here, i am still waiting for some answer. I guess, it is not appreciated to report shortcomings for this software, so i can save my time to report bugs here. Or why exatly do you ignore my questions?

I have spent a lot of time here, helping other users. So maybe i can expect some sort of reaction then?

All suggestions are listened to. Currently this isn't possible, one day it might be!

You could probably do it yourself now using scripting

a forum, where closing threads should not be necessary in case it was a harmless request

The other thread wasn't that useful to start with and had already served any purpose it had when someone dumped a wishlist of descriptions of unrelated issues (breaking the one-issue-per-thread rule), where the list was also so unclear and with so few details on each issue that we could not know what most of them were about, let alone try to fix or explain what was going on. Trying to discuss that many issues in a single thread will not work.

We never close threads that are productive, but we will close ones which are going to be impossible to track or do anything useful with. If appropriate, we'll often request things be posted in a better way at the same time. Exactly what was done with that thread. Unfortunately, the poster then did exactly the same thing in a new thread, so that was closed as well. Maybe the problem is a language issue, but we can't do much about that, and if their English isn't good enough to understand a request to post each issue separately then it's going to be hard to talk about details of technical problems (as we've found in the past; we get vague details that don't mean enough to us, ask for more information, and just get complains that we haven't fixed things where we still don't fully understand what is wrong).

As for this thread, you should know by now that we don't reply unless we have something useful to say, but we do always read suggestions and keep them in mind. Sometimes we implement suggestions quickly (like the same day) and sometimes they have to wait until we're working on that area of the program, or similar. Some suggestions never get implemented, which is life, and some can take years before we decide it's time to do them, while some are done in a few days. That's a million times better than most software.

We've implemented a huge number of your suggestions over the years but you still assume bad faith for some reason.

Ok, thanks Leo & Jon. Forget about the other thread, as my toolbar looks better using just one version earlier, so i can wait for the new beta now.

I guess, i won't learn scripting anymore, as Jon suggested, so i could rule out that possibility to write some own code. But if you registered the request, then it's ok.

I have 36 register layouts here, including #styletabs.style stuff, but never am sure which one is which. I simply don't remember the details, having given them "normal", "normal01", "normal02" names.

Maybe it would be worth to consider a new status bar or "%P style" code to show the current layout in the title bar? Also, you're right about including lots of suggestions from the users, or mine.

I have spent a lot of time here, helping other users.

@abr its appreciated, thanks for your input.

You could probably do it yourself now using scripting

Not sure how we could do this one. I don't have a lot of exp with Tab Groups, I assume we are talking about the dialog that appears when you Right click on a tab > Groups > Save, or GO TABGROUPSAVE.

Are we able to pass a value in to that dialog, or were you thinking we would create our own dialog? We can use GO TABGROUPSAVE "name here", but that performs the save action.
To create our own dialog, we would need access the the Tab Group List, the current selected Tab Group. Do we have this I could not find it in the doco.

Maybe it would be worth to consider a new status bar or "%P style" code to show the current layout in the title bar? Also, you're right about including lots of suggestions from the users, or mine.

You can already put the layout name in the titlebar via:

When you save the layout it should also default to the name of the layout which the lister was loaded from (if any) already.

But folder tab groups are not layouts, and there isn't any concept of "current tab group" at the moment. The information simply isn't there. When a tab group is loaded, the tabs it specifies are opened, but there's no record of it. And you might then close or change all the tabs, where it's debatable whether the tab group you loaded is still in effect. (But the same is true of layouts, and we remember them, and it's useful, so it's not a bad idea to do the same for folder tab groups; it just isn't done right now, and isn't as simple as changing a few lines of code; if it was we would have done it already as it's a good idea).

Perhaps, you could use some buttons like what was suggested in this thread is-there-already-or-can-you-develop-tabs.

It's a set of buttons that indicate the last tab group selected. Then when you open the save dialog you could see on the toolbar what one you last loaded and would know what one to overwrite.

This has quite a few limitations, Multiple Listers opened, or opening Tab Groups by means other than using the buttons. However it is simple to try out and there is no scripting as such, just some buttons.

Not sure how we could do this one. I don't have a lot of exp with Tab Groups, I assume we are talking about the dialog that appears when you Right click on a tab > Groups > Save, or GO TABGROUPSAVE.

Are we able to pass a value in to that dialog, or were you thinking we would create our own dialog? We can use GO TABGROUPSAVE "name here", but that performs the save action.

You could build your own dialog to do whatever you want. You could implement your own command to load tab groups and track which one was loaded in a global variable.

Thanks, i will check those buttons. Btw., i also remembered that i can look up the tab groups in the preferences page to identify them.

Well, "refuse", i don't know if that's the case. I don't think you can learn such complicated stuff just like that (except you're a big talent in that field). To get the job done, it could take years. My last programming experiences go back to around 1986, playing around with Basic & Pascal. The most advanced program i managed was some prime numbers calculator.

In the next update we'll add an indicator to the dropdown list to show which tab group was most recently loaded.

That's cool, i've justed checked it. Also thanks for fixing the DPI thing!

IS THIS THE CORRECT THREAD?
The title of this thread is "Show current tab group, when saving it"
This is I believe precisely the same issue that I want to query.
I think this is the best thread to raise this matter - there are several threads that deal with this.
I think I have raised this before but i did not see any post of mine when I searched.
Let me know if you want me to move this post to a more appropriate thread.

LAST TAB GROUP SAVED INDICATOR
I think this indicator that Jon refers to above has now been implemented.
If I read this post right this indicator is shown by the bold entry in the built in context menu below.
Lets call this the CURRENT_TAB_GROUP. In this example the CURRENT_TAB_GROUP is Sample TabGroup.
I have RHS clicked the tab area and selected the Groups context menu item.
The submenu shows my (many) save tab groups including the current one Sample TabGROUP which is the last tab group that I opened and is grandly named CURRENT_TAB_GROUP as per above.
Opus remembers the last tab group I opened and shows this in 2 ways
W1 The last group opened is in bold in the context menu (red box)
W2 When I click the Save... context menu item the last group opened populates the field which I can edit if I want to save the current tab group. 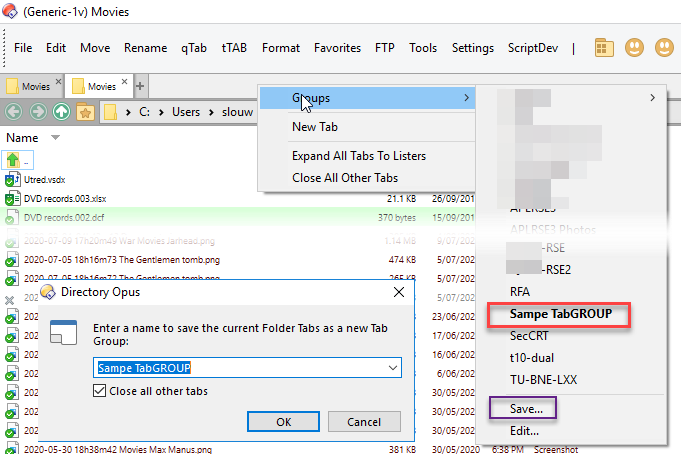 Q1 Is it possible to reach this built in context menu show above with a keyboard shortcut?
I am assuming not but it would basically solve my problem if I could.
As you will see below I have gone to some effort in reproducing this context menu using a customized setup so that I can save tab groups using keyboard only. I dont want to use the built in context menu (above) because it is only available to me (so far as I know) with a mouse.

So far so good.
Now please see below the customized menu I have setup to replicate the tab group context menu above.
The Save Group menu item (purple box) is implemented with the go tabgroupsave internal command as follows:
go tabgroupsave {dlgstring|SuffiXXX}
Note that my popup dialog box does not have the last saved tabgroup (CURRENT_TAB_GROUP, current assignment Sample TabGroup) which is present in the corresponding built in context menu shown above.
The purpose of this post is to find out...
Q2 Is it possible to prepopulate this field with the last saved tab group?
In the case of my example this would be Sample TabGROUP 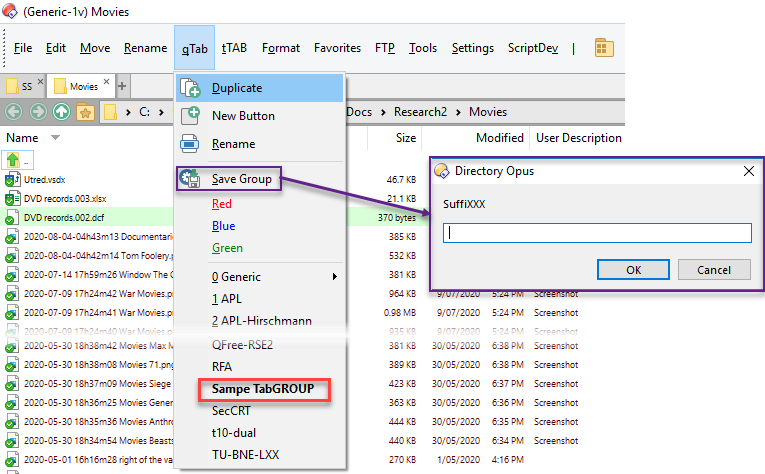 Hope this makes sense appreciate any replies as always

Q1 Is it possible to reach this built in context menu show above with a keyboard shortcut?

It's in the default toolbars, keyboard accessible, but in quite a nested menu.

If you want quick keyboard access to it, I would add a menu to one of your toolbars and put this command inside it:

Give the menu itself a name like Tab G&roups and you can open the menu via Alt + R.

Q2 Is it possible to prepopulate this field with the last saved tab group?

If you just run go tabgroupsave on its own, the dialog it displays will automatically be pre-populated with the name of last tab group you loaded into the current window. (The assumption is that you might want to update it.)

Not sure if that's what you want.

Thanks Leo.
Q2 - I had go tabgroupsave {dlgstring|SuffiXXX} which was bringing up a dialog box unpopulated.
I did as you suggested using go tabgroupsave now the dialog box comes up withe the desired last save tab group. Solved. Thanks!

Q1 - What would the default keyboard shortcut be to bring up this context menu?
Or can I set it somewhere?
Thanks again