Thumbnails from OneDrive with transparency/alpha

First off let me say that I am nearly certain this is either a Windows issue or a OneDrive issue, but wonder if anyone has found a fix for it in DOpus.
I am a digital scrapbooker and have 1000s of files which are mostly jpgs and png files saved in OneDrive and synced back to my HP laptop. DOpus has been great for viewing and organizing them. Up until recently, I had all of my OneDrive files set to "always keep on this device" and everything was working fine but they were really starting to fill up my hard drive so moved them all to free up space and back to cloud only, download on demand. Now all of my thumbnails are messed up and I did not change anything in my settings, (but have since tried changing some things to try to fix the problem.).
Most of my thumbnails look very odd, like the color of the graphics flow to the pixels out side of the graphic to fill the frame making it so I can't tell what the png file is supposed to look like until I hover over it and show it in the preview screen. Sometimes the background fills completely with black and if the graphic is black then it turns into a black square.
Is there a way around this happening besides putting my files back on my hardrive?

Here is an example with these hearts. Some graphics are much worse than this.

Thumbnails for offline files are generated by the OneDrive servers. It looks like they don’t understand images with alpha channels (which is quite surprising!).

Do you see the same for them in File Explorer?

Yes, and the same thing often happened with file explorer even when the files were on my computer which is one of the main reasons that I sought out an alternative and was happy to come across DOpus, so this is disappointing that I am having a similar issue now.

It must be an image format / transparency type that OneDrive (and maybe other Microsoft software) doesn't understand.

Since the files don't exist on the local machine, Opus can't thumbnail them itself (it would have to download them to do that). Instead, it asks OneDrive for the thumbnails, which get sent back.

There are similar issues with PDF files where OneDrive may render their thumbnails very differently to the local PDF software. And there are also formats OneDrive doesn't know how to thumbnail at all which will only work when the file exists locally.

All part of the joys of cloud storage.

Ugh... so you are basically saying there isn't anything I can do to fix it if my files are stored in the cloud in OneDrive?
Thanks for your replies!

The only thing you can do is keep them locally so Opus can generate the thumbnails instead of the OneDrive servers.

(Or write to Microsoft about their bug, but they'll probably do nothing.)

Thank you... I had a feeling all along that was going to be the way it was... that this was a Microsoft issue and I knew that would be a dead end.

I had hoped that maybe DOpus had figured out a way around it. I guess I will just go through and keep some of my most used folders locally and download the rest as needed.
Thank you again for your time in discussing this with me.

Leo, the current Directory Opus builds coupled with the current Win10/11 Onedrive client seems to never locally create thumbnails even if a file is available locally - especially for PDF files. Fully synched folders still seem to query the Onedrive server for the thumbnail. Is there any way to integrate a logic that overrides this? Thanks for investigating.

Based on a test of PNGs with transparency, which OneDrive doesn't understand but Opus does: 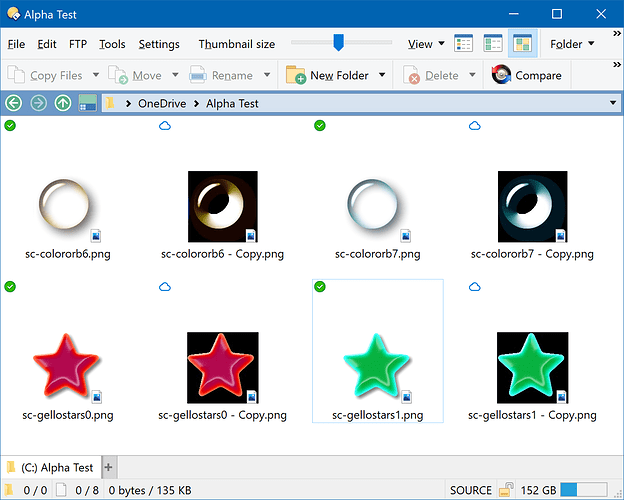 PDF files may be more complicated, since thumbnails for those always come via the shell. What the Windows shell does is up to it in combination with the installed PDF shell extensions, as well as the shell's thumbnail caching (which could keep showing a cached version of a thumbnail that was originally generated server-side, perhaps). Not something we have much control over, if it's that.

Leo, as always, you are right

It's just the files Dopus relies on Windows for thumbnails. And apparently Onedrive fixed their thumbnail code because I had dozens of files that never had a thumbnail before which now have one and using a second machine I confirmed that finally Onedrive got fixed. Because I saw correct thumbs on files that never worked before I assumed that this was Dopus instead.
So, case closed, unless somebody finds a way to trick Windows into NOT getting a PDF thumb from Onedrive if the file is available locally. But it has become a pure speed issue now, not a "does not work at all" issue as three months ago.