More details: I created a toolbar with system shortcuts (because win 11 does not support own toolbars). For this comparision I created the button "shutdown" twice to show the different behavior.

The size "standard" is too small for me. See picture Icons_small.png (compare it to the taskbar icons). Opus toolbar is on the left side.

When I use "large icons" the Opus Icon (lowest one) gets a little bit larger. But the windows icons (from shell32.dll) are now very large and even larger then the icons in the taskbar (I created there also a shortcut for shutdown to show the difference).

PS: I wanted to use the icons from shell32.dll, because I like them more than the ones I have in Opus. I can search for other Opus icons, yes. But perhaps the described behavior is not intended?!

PPS: I recognized now that it is also possible to pin shortcuts to the taskbar which are not located on the desktop. But therefore you have to use explorer, Opus does not have this context menu entry (as additional info for other win 11 users.

Turning off Preferences / Toolbars / Appearance / Scale Toolbar button images when larger than standard size will remove any size limit for icons in toolbars.

(What the Windows desktop now calls "small, medium and large" does not correspond to anything else. They're just relative to each other and only apply to the desktop.)

Ah, Standard is no own size. ok. only small and large is available.

Is this issue perhaps caused, because the picture is somehow included in the shell32.dll and not a real picture file?

So in small mode the icons have the same size, but in large mode the windows icons are much larger then Opus icons.

Most icons in shell32.dll come in multiple sizes. For toolbars, Opus will only load the two most common sizes directly from the DLL ("large" and "small"), but you can use a tool like IconWorkshop to extract other sizes to PNG files which Opus can also use.

ok, but should Opus not rescale the icons when the setting "Same-sized Buttons" is activated?

That option will re-scale them to the current Opus toolbar icon size. Probably not the size you want.

So you mean to the size which is small or large for this icon and not to a defined "pixel size" for all icons?

So if I have one small icon and three large icons and the toolbar setting is small, the large icons would be rescaled to their small version? But it could be that every icon has a different real height?

I can make some trials tomorrow...

Would it not make more sense so scale all icons to the same real height? I understood this function like this, but seems to be wrong.

At least in the situation like described above this setting has absolutely no visible influence.

The "large" and "small" sizes are defined by Windows and the API it provides for loading icons. Not really anything to do with Opus. Icons can also come in various other sizes as well as those.

ok, but that does not answer my question about the "same-size" setting for floating toolbars.

In the help file is written: Controlling Floating Toolbars (gpsoft.com.au)

Same-sized Buttons: Make all buttons in the floating toolbar the same size. When this is on all toolbar buttons will be the same size as the largest button.

But that does not work. The setting has no influence on the icon size. At least when using icons from shell32.dll

I tried several things, but the setting "same-size" does not have any influence in any case. The icons (tried it with different Opus icons and jpg-files) have always their specific size which is chosen directly in the button setting or toolbar setting.

Seems that this setting does not have any function. Perhaps a bug?

It makes all the buttons the same size, not the icons on the buttons. The icons may be smaller. Similarly, the labels (text) on each button won't be made wider to fill the empty space. It just pads the buttons so they are all the same size, and that's all it's meant to do.

The other setting, the one I mentioned above, will scale down large icons to certain size (but it won't scale up small icons).

If you want toolbar icons from one of the Windows DLLs which are larger than the standard Windows "large icon" size, you will have to extract the larger sizes from the DLLs into PNG files and use those, as I said above. (That will also give much better image quality than you would get if you took a smaller size and scaled it up.)

Also, the range of sizes for icons within shell32.dll varies by icon. 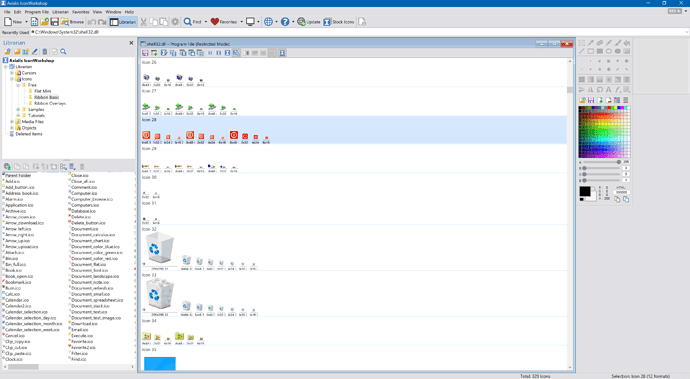 It makes all the buttons the same size, not the icons on the buttons. The icons may be smaller.

Can you show an example where this works?
On my side it does not work - the setting "same-size" has also absolutely no influence on the button size.
Here some buttons with different sizes (small/large) and also different icon sizes. All buttons have a different size depending on each icon size. No effect when I activate or deactive "same-size buttons". 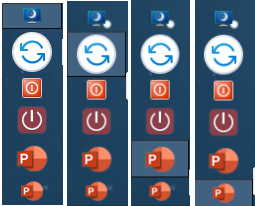 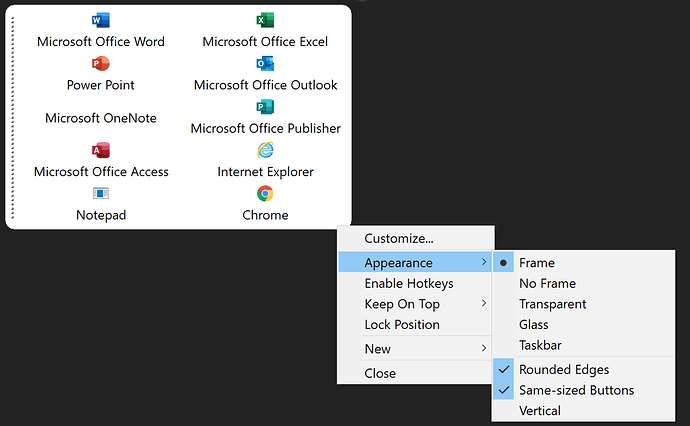 Ah: The setting does not work for docked toolbars. So if you dock the floating toolbar to the left side of the desktop or to the taskbar the buttons have different sizes like shown in my pictures.

When the toolbar is "free" the buttons have the same size.