When I have a file selected in the lister, I'd like to be able to press {Space} to see a preview of that file. But I don't want to open it in an external viewer application as I want to be able to make that go away with another press of {Space}. Like the Quick Look feature in Mac OS X. Space for on; space for off.

Perhaps it's possible to bind {Space} when input focus is in the lister to the display_on/display_off of the Preview Pane? It seems like that'd be a great way to do it, for me.

Attached screen shot shows a file selected in leftmost lister and the Preview Pane displayed. And it shows that I usually have two listers open. No other significance to the pic than that. 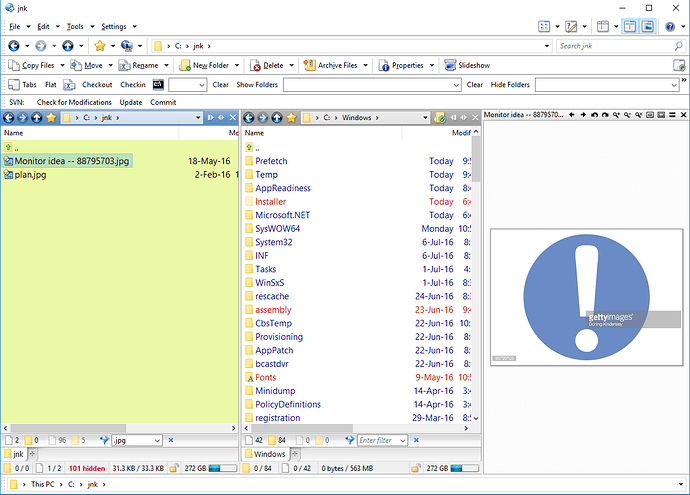 F7 will toggle the viewer pane on and off by default.

You can change the hotkey to pretty much anything you like, but I would not recommend using Space itself as it is used to select files (one of the standard keys for list controls in Windows).

Thank you. I figured {Space} might toggle the checkbox in the advanced mode in Directory Opus, but I didn't check it as I don't use that mode at all. But in what case does {Space} select a file in Windows?

Alright, I found it. If the file is semi-selected (border rectangle around filename, but that border is not filled with selection color, select selects it. That's in Opus and Windows 10's File Explorer. All clear now. I'll try to accustom myself to using {F7}. We'll see how that goes. =)

I've been using the hotkey "space" to "Set VIEWPANE=Toggle" for a year now and I've never had major problem. I'm sure Leo has a point that occasionally I may run into something situation where space didn't work perfectly, but generally it's been almost flawless for me. I wouldn't hesitate using this method to mimic Mac's great Quicklook through Opus.

Thanks, ouwen. I used it Friday and am in love with it. My thumb is already on the spacebar all day, so it's very natural.

I use {space} all the time for selecting a file after I've used cursor keys to move the "target" outline to the correct file(s). Having the viewer pane toggle with {space} would affect my usual way of working with files and the "selector". However, I'm curious, if the file is targeted but not selected, does the space only toggle the viewer pane and not select the file?

I don't understand, @DesertDwarf. When I use the keyboard arrow keys to change which file is selected, it moves the highlight color, not just the rectangle around the file name. What am I missing?

Hmm. You're right. I know I use the space bar at some point to select the file. I had to play around to remind myself. It's when I enter a new folder and I want to select the file that's already targeted. I guess I could still use the arrow key because, even if there's only one file or folder, it still selects the file.

But, I'm already using the viewer pane the way I want, so it's not a big deal to me.

Thank you for straightening me out!

My pleasure. Nice talking with you.

If you hold the control key down you can move the focus without changing the selection.

Now that I know I do use. It's very handy for us keyboard jockeys.

Update after some months: Using {Space} this way is working great for me. No complaints.