Thanks to the Opus developers for all all the hard work on the new version, particularly Leo and Jon who have been so responsive to all the testers throughout the Beta program. v12 is a big step up and has been well worth the wait.

When I was watching Leo's "What's New" video for the first time I got to about the half-way mark and thought to myself "wow, there's really a lot of new stuff in this version"

So far it seems like DO12 is a drop-in replacement for DO11, which is really
really appreciated. Scripts and rename scripts seems to work like they did too..

I assume the extra toolbars in the toolbar list with "name (1)" is the ones from v11?
I'm asking because I haven't used any of the regular named toolbars to begin with.

Just finished watching the 'What's New' video. Thanks so much for including Chester once again - I really do miss that little guy!

Looking forward to fun and productive times with DO12.

Thanks for the encouragement, everyone.

[quote="myarmor"]I assume the extra toolbars in the toolbar list with "name (1)" is the ones from v11?
I'm asking because I haven't used any of the regular named toolbars to begin with.[/quote]
Those are backups of the same named toolbars from Opus 11, in case you had customized them and didn't want to lose them.

If you hadn't used those toolbars you can simply delete the *(1) copies.

Some more detail here: Your old toolbars are still there after you upgrade

Just finished watching the 'What's New' video. Thanks so much for including Chester once again - I really do miss that little guy![/quote]

Some very missed cats in the videos now.

But it's nice to remember them. I feel bad as one of my two alive cats hasn't made it into a video yet.

Chester even found his way into Preferences! 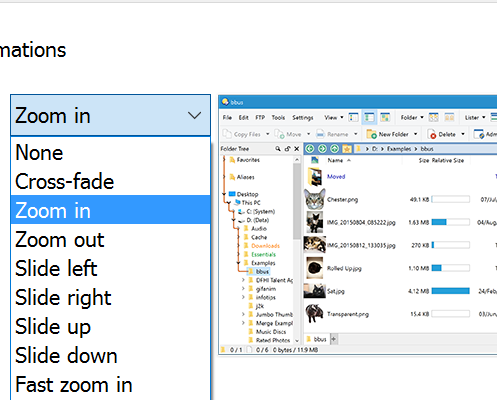 Please release next version not on a monday, because updating and working means stress for me. Friday or weekend is better...

Excellent work team! Is the video available to download?

How do you guys do it??
I have (only) been using DOpus since V8. Every new release I think that must be it, as it just seems like perfection, but then you start on the 'point' releases, adding new function that other software houses would charge for, and then major new versions which add/change function that you wonder how you managed without!
Version 12 is definitely no exception. I have just watched the video, and despite having used all the beta releases, still discovered things I never knew were there.
A fantastic new version - congratulations and many thanks to you guys!

Back from work, I've just upgraded and bought the additional license which I planned for some time, and now I'm ready to immerse myself in the What's new video

Congrats. As always a pleasure to upgrade.

Same here - best explorer ever:) Thanks for caring so much about details, it's really a pleasure to work with this software!

Wow, I had saved the video for tonight... It's outstanding!
Leo, you've taken video tutorials to a new level.
I was blown away with the number of features shown on the vid. After using DO12 for a few months, I had forgotten how much there was. And there are lots of little features for which reading the release notes is not enough, I have to see them in action to understand them.
So thank you Leo for that great piece of work (and Team Opus in general for all the goodies)!

I've added the video to the top of my "what's new in DO12" page... You say so much more and you say it so much better.

@blueroly It's easy to download the video from YouTube using a variety of browser plug-ins. For instance, on Firefox, I currently use "Video DownloadHelper".

Here's a temporary Dropbox link to the video.

The Dropbox link will stop working at some point so please don't link to it as an official source. Stick to the YouTube URL for that.

The YouTube video now has subtitles, which I just finished making, for those who were waiting for them.

Thanks for all the encouraging comments! Opus 12 has been a heck of a lot of work over a good long time now, but it's been worth it.

I'd like to add my congratulations for the launch of DOpus 12.

Because I'm a teacher, I would also like to congratulate leo and jon for your extraordinary work conducting the Forum. Forum leaders have become our teachers in this new IT world, and you do it very well, with just the right mixture of clues when necessary, and leaving us to work it out ourselves when appropriate. From your responses I learn, and I learn to be resourceful.

Congratulations and thanks for all the hard work & support DO Team.

Looking forward to getting stuck into v12.

Here's a temporary Dropbox link to the video.[/quote]
Brilliant, I can watch it on the train on my way home now... thanks Leo.

Brilliant, I can watch it on the train on my way home now... thanks Leo.

Make sure you turn the volume up full

Congratulations on the release guys, a stellar upgrade so far