Your old toolbars are still there after you upgrade

See also: How to create a Styles tab-bar (like Opus 9)

If you install a major upgrade of Directory Opus over a previous version then you'll see the new default toolbars when it first launches.

Don't panic, your old toolbars have not been erased. (That would only happen if you uninstalled the old version before installing the new one. If you need fresh copies of the Opus 9 or 10 toolbars, see the reply below.)

Your toolbars are still there, they just aren't turned on.

Turning toolbars on and off is done the same way it was in the previous version of Opus. Right-click the empty part of a toolbar and then select Toolbars to get a list: 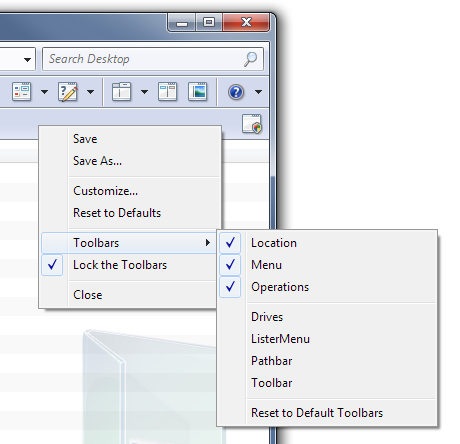 You can also use the list in the Settings -> Customize Toolbars -> Toolbars window: 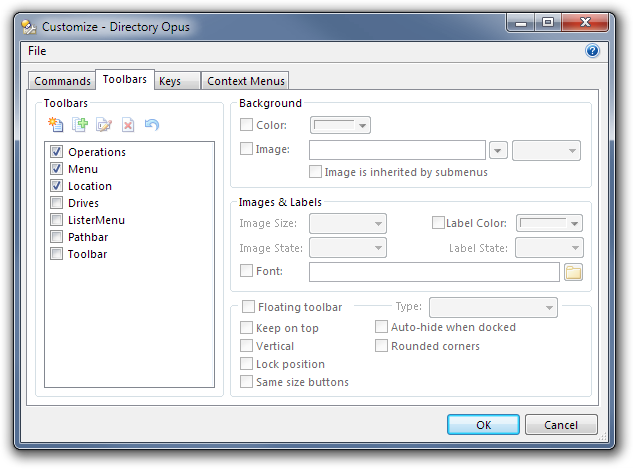 The new default toolbars and menus expose a lot of new and once-hidden functionality, so we wanted everyone to at least look at them to discover some of what's new.

It is also difficult to detect how much each person has customized and whether or not they'd want to use/try the new defaults, so we always go with the new defaults and let you turn the old ones back on if you want to.

We figured that people who have done a lot of customization will be familiar with turning toolbars on & off, and with how this worked in previous Opus version changes, while people who had not customized much (or anything) would probably not want to be left with the old default toolbars after upgrading.

The Opus 12 and 11 default toolbars are called Menu and Operations (in order of appearance). The default file display toolbar is called File Display.

The Opus 10 default toolbars are called Location, Menu and Operations (in order of appearance).

The Opus 9 default toolbars were called ListerMenu, Toolbar and Pathbar (in order of appearance).

If you happened to have a toolbar with the same name as one of the new defaults, it will have been renamed automatically. e.g. Menu (1).

The Light version only supports limited toolbar editing, in the form of creating additional toolbars and adding your own custom buttons to them. The stock toolbars cannot be edited or switched to custom toolbars in the Light version, so most of the above does not apply.

How to create a Styles tab-bar (like Opus 9)
Best way to transfer v9 config customizations to v10
Open layout in existing window
Dopus 11 dots to spaces
Upgrade from 11 to 12: My Dopus11 toolbars and menus aren't there
Cannot restore customised toolbars after upgrade to version 12
Updated to version 12 and lost all layout
Updated to version 12 and lost all layout
Opus 10 Menu Toolbar
How to get my "lister view toolbar"back?
V. 9 Menubar gone in v10 upgrade
Unable to paste commands in the toolbars section
Upgrading Instructions
Opus 10 Menu Toolbar
Sort-by button broken
Import DOpus9 Config to new DOpus10?
Toolbars after update (Was: No response from GPSoft)
Preserve user's layout during upgrade?
Upgrade Version 10
Where's old toolbar?
Upgraded to V10, old config lost
Need Assistance
V.11 removed my custom menu and I want it back!
DO11: where is my SFTP support gone?!
Move up function not working
DOpus keeps asking me what to open MS Office files with
OCB files in new install
Upgrading questions
Disappointment
Where is my Favorites ToolBar
Multiple Versions
Downgrading from 11.17 back to 9.5?
Move Prefs Backup From 10 to 11
V12 - Congratulations Team Opus!
Upgrade to Version 12 did not import all of previous configuration
Upgrade to Version 12 did not import all of previous configuration
DOpus 12 evalutation - you do this WRONG!
DOpus 12 evalutation - you do this WRONG!
DO12 - Restore not fully functioning
Old Toolbar
Using TeraCopy with Dopus 12
V11 custom buttons ok in v12?
Get rid of new toolbar and menu after installing v12
How to clean up duplicate hotkeys
Lost my custom buttons when upgrading from v11 to v12
Labels: File names vs. everything else
General usage problems after upgrade to 12.7
General usage problems after upgrade to 12.7
Toolbar icon sizes / Open In Tabs button
List of FAQs organised by topic
Custom button has disappeared
Upgrade to 12 - Your old toolbars are still there after you upgrade
Default Apps
Incase of upgrade do i need to install upgraded opus file?
Using Folder Marker makes Dir Opus freeze
Updating from Opus 10 to Opus 12. Precautions?
Leo November 8, 2011, 1:57pm #2

This should only be needed/used if you want an old-style configuration but have done a fresh install of Opus and don't have a backup of your old config.

The toolbars have been renamed with an "Opus9_" or "Opus10_" prefix to avoid conflicts, but you can rename them back if you like.

Unpack the archive to somewhere and then do one of the following (these are three different ways to accomplish the same thing):