Verify SHA256 hash against the same in clipboard

This is about verifying a SHA256 hash of a file against the hash in clipboard.

AFAIK there aren’t many tools that can do this.

Downloadable files are often provided with a SHA256 hash.
It would be nice to copy that hash to clipboard, download the file, run some a checksum tool that calculates the SHA256 and verifies the hash with the one pasted from clipboard into a hash-box within that tool.

For those who are, like me, not familiar with with scripting and/or command line matters: there is a small tool named : MD5 & SHA Checksum Utility
(raylin.wordpress.com)

There is a free version, but the pro version (one-off usd.9.99 only) provides some extra features, like context menu support.

Regretfully there is no separate portable version, but it is very easy to make one.

Install the software, copy the “MD5 & SHA Checksum Utility“-folder to USB or anywhere else on the HDD and it is a portable version.
Pro version: double click the .exe and tag “Integrate to Windows Explorer Context Menu” under options.

In the added screenshot: 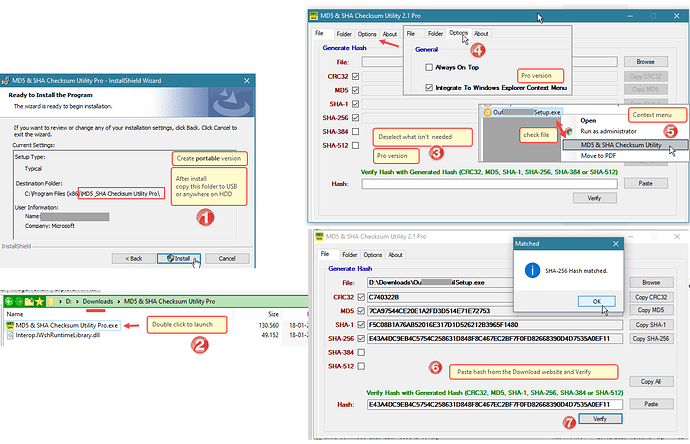 Freeware HashMyFiles at https://www.nirsoft.net/utils/hash_my_files.html does find checksum for all common hash algorithms. It also provides context menu and has option to automatically mark the file with the hash available in clipboard. It is also portable in the sense that just copy the contents of the zip in any folder and run from there. No installation required.

Does it also compare the file-generated hash with the hash in clipboard?
(see step 7 above)

There's an Opus add-in which does something very similar:

Note: This script now requires a minimum Opus version 11.16... This script was written in response to a request from TheSeeker in the following discussion: SHA-256 checksums What does it do?: This script adds a 'HashCompare' Script Command to Opu…

I did spend some time on that one, but frankly speaking I gave up in the end. Ended up with "Failed" each time. Felt I shouldn't keep on nagging here. That said, I would not know how the command would have to read to compare/verify a file with the hash in clipboard (SHA256).

This program is very simple in its working. You download the software zip (86 KB download for 64 bit version) and unzip in any folder and run the executable from there. In Options, you can select to Enable Explorer Context Menu (works in Dopus too) and also the option for Mark Hash in Clipboard. 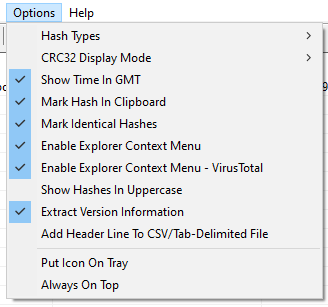 If you have already copied the hash of the file you downloaded from its website to clipboard before downloading the file, just download the file, right click it and select HashMyFiles from context menu as shown above. If the hash in the clipboard matches any of the hashes for the file the row will be displayed in color. 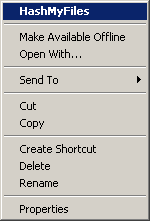 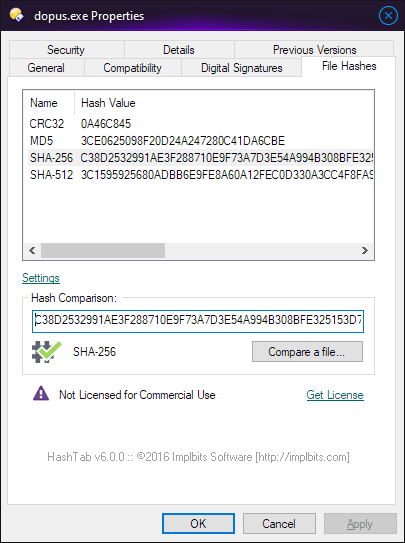 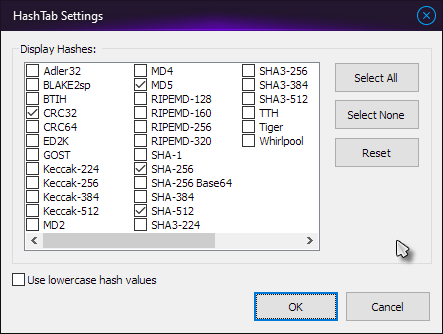 THANK you!
Frankly speaking, it is stupid mistake on my part: I simply forgot that it would mark the hash as 'green' if it matches the clipboard. Ahum...
I was expecting something like a pop-up with [OK] or [Match] or something.
Thanks again.

Thank you DesertDwarf. It's a nice tool, at least it looks quite nice.
Don't know if it is portable though.