Viewer Icon should be different?

) ?
Most of the time it confuses me when I try to open the viewer window instead of Opus. 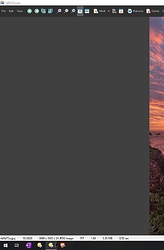 Note that the Viewer/VFS Plugins category is for posting viewer plugins and VFS plugins.

Questions about the viewer etc. should go to Help & Support. Please use the right area, else your post gets put into the moderation queue and we have to move and approve it.

Regarding the icon, you're probably confused by the way the Windows 7/8/10 taskbar works. If taskbar grouping (or "Hide Labels" as it seems to be called in the Taskbar settings UI) is on, which is the default, then the icon represents the application, not any individual window. You only see individual window icons when you hover over the application icon.

If you turn off grouping on the taskbar, you'll see a different icon for viewer windows compared to other windows.

(You seem to have two Opus application icons on your taskbar, and I'm guessing that if you unpin both and then re-pin whichever remains, you'll then only have one.)

You can also install this add-in to separate viewer windows into their own group on the taskbar, which will also make the viewer icon appear at the top level of the taskbar, distinct from the Opus application icon:

Requires Directory Opus 12.12.1 beta or above. Overview: Two script add-ins are provided: One moves all standalone viewer windows into their own taskbar group, separate from all other Opus windows. [TaskbarGroups] The other moves listers ope…

I'm so sorry for putting the topic in the wrong category. I misunderstood and thought that was a general topic about Viewer. Not gonna happen again.

Your add-in works perfectly!
I guess the problem occurs because an other application called "7+ Taskbar Tweaker" that customize the behavior of the task bar might had changed something. Maybe this is the case. 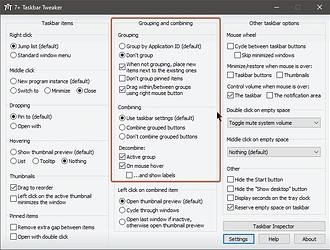 Anyway, Thank you so much for all the support. You guys are the best!

I'm so sorry for putting the topic in the wrong category.

Don't worry about it! The reason posts into there go into a moderation queue is because so many other people have also done it.

I guess the problem occurs because an other application called "7+ Taskbar Tweaker" that customize the behavior of the task bar might had changed something. Maybe this is the case.

I haven't tried with that tool, but I guess it must be doing something different to the Taskbar's normal "don't group" mode.