Does anyone have a rename script for replacing common percent/ascii encoding in file names? My searches are coming up blank.

Not sure how the last one compares as I have not reviewed it recently. (I've been reviewing, updating and moving rename presets for the last couple of days, but have not done the third one yet.)

Actually, you probably want to ignore my previous reply. Those are for converting names to make them "websafe", not for percent-encoding them (which keeps the name "unsafe" but in an alternative form).

I'm not sure if there is a percent-encoding rename script, but it would be pretty easy to write one. I can do that for you if you want.

Is that actually what you want, though? I could see wanting to, say, copy the percent-encoded version of a filename to the clipboard so you could refer to the original filename on a web server. But if you renamed the file to that, it would just give you a file with a name which is even harder to refer to via a URL, since it'd be full of % characters that need escaping.

To clarify, I want to remove percent-encoding from a filename.

[Download removed -- Grab the improved version from the thread linked in my next reply.] 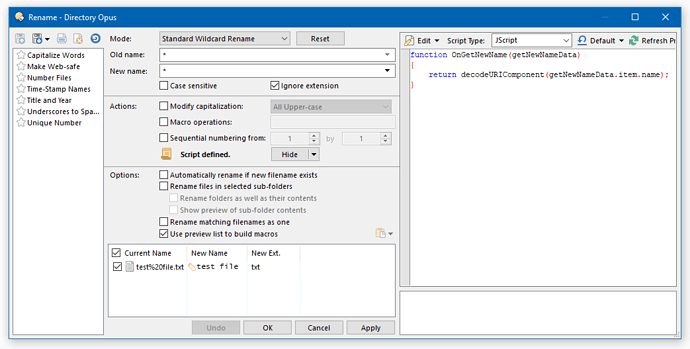 Download: URL Decode.orp (1.8 KB) See: How to use Rename Presets from this forum Overview: This rename preset converts filenames which have been URL Encoded back to their proper names. [200dpi_wc10319_dopus] URL Encoding, also called Percent En…