Where can I get Serif fonts?

Directory Opus SERIF Fonts? Where can I get them?

I have looked in the settings, looked for fonts that have serif. But all I could find where SANS-SERIF. I want these types because I am fed up with mistaking, an I 1 l etc for each other.

Opus can use whichever fonts you have installed on your machine, including serif fonts. 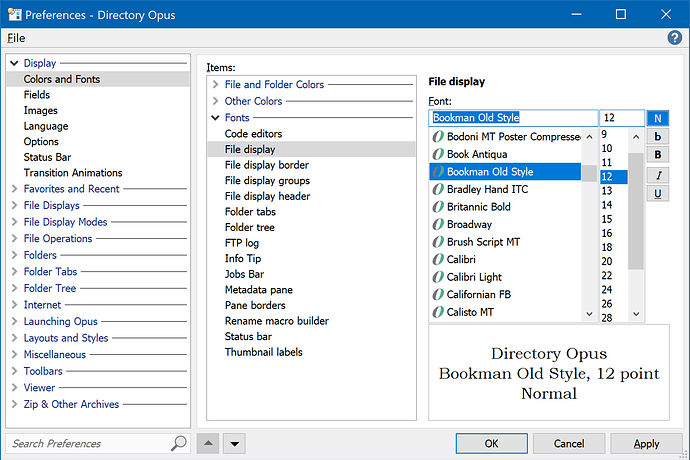 My machine has several Serif fonts, although I don't know if they came with Windows or if something else (Office, Photoshop, etc.) installed them.

You can find fonts on the web. Just search for "Windows fonts" or similar. Nothing about them is specific to Directory Opus.

Georgia should be included in most (if not all?) Windows installations by now, if you want to check that a serif font is showing up in your list.

Thankyou for the info, very much appreciated.

I am fed up with mistaking, an I 1 l etc for each other.

I use Verdana Pro, which you can get for free in the Microsoft Store if you're using Windows 10, for exactly this reason. It is a Sans Serif font, but it has Serifs on the capital I's (and J's), the 1's are clearly distinguishable. It also has five font weights, a condensed width, relatively loose letter spacing, wide glyph proportions, tall-ish lowercase letters and other features which are all designed to optimize for legibility.

The non-Pro Verdana, which has been included with Windows for a long time now, doesn't have as many styles as the Pro does but has the same legibility optimizations. Tahoma, also a Windows staple, is very similar to Verdana, only with tighter letter-spacing. FInally there's Nina, also in the Windows Store, which also is very similar to Verdana but has even tighter spacing than Tahoma.