A search in this forum hasn't harvested anything helpful, at least not that I have found yet.

Thanks in advance for any light anyone can shed on this little anomaly.

FWIW, they are there for me when I right-click:

Make sure you have not turned this option on: 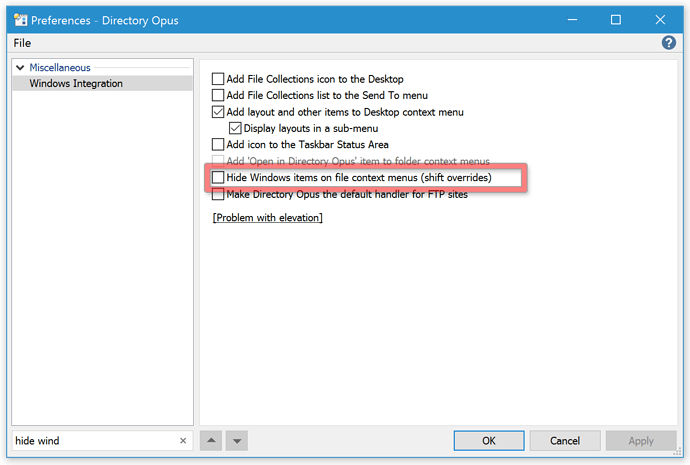 Thanks for your quick reply.

Unfortunately that was the first thing I checked, and the "Hide Windows items..." option is not set, which would hide lots of other things if it was. Everything else is there, as far as I have noticed, except the .iso items. I also checked the Windows .iso association which is what it should be.

Those actions come from static verbs in the registry so it's unusual for them to be missing.

It's possible your registry has leftovers from your Windows 7 installation which means this isn't the case, but that would mean Explorer is adding the items via a different method (one that Opus doesn't know about). If you can have a look at your .iso filetype with RegEdit it might give us a clue as to what's happening.

I have 2 machines here side by side. One with a clean Windows 10 install, which doesn't have Dopus installed, and the other is the upgraded machine with Dopus which doesn't show the .iso context menu items.

Both machines have exactly the same keys and values in their respective Registry.

Please run my FileTypeDiag tool on .iso and post the result in a zip.

Never mind, I found the issue which I missed at first glance.

The problem was in HKEY_CLASSES_ROOT.iso with the (Default) value. It was missing "Windows.IsoFile in it's string value. Odd that it didn't matter to Explorer, but when I put the right value in Dopus immediately added it to the context menu without a reboot or log off and on.

So all is good again. Thanks for your help.