The "XDX7-THEME Icon Set 3.87z7e"
This is a high contrast icon set which is designed primarily for dark toolbars. These are just some random icons that were mistakenly found under a rock in the woods somewhere. Some of the icons have color variations which are useful for mouse-over effects or distinguishing related functions. 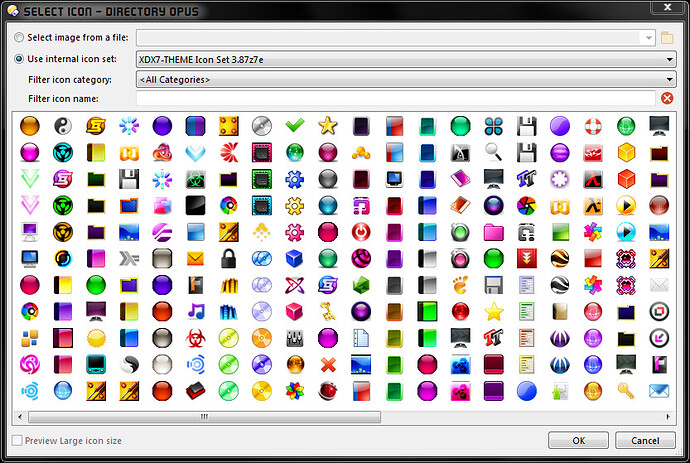 99% of the icons are 24x24 pixels square, these I use for my center toolbar which is sandwiched between two 48 pixel high toolbars which use another icon set. Even if you are rocking a light theme it's advantageous to use black/dark toolbars. This is applicable to many applications not just Dopus. For the most part, icons designed in the 20th and 21st century are light colored, so setting a toolbar's background color to black automatically makes the icons stand out more because of the increased contrast. This increase of contrast makes scanning and identifying icons easier and faster. I personally prefer color icons as opposed to the flat styles because you have more variability in color, tone, and texture, making distinguishing icons definitively easier versus just distinguishing icons by shape alone in mono-color themes. At one point I tried a mono-color icon theme and it slowed me down tremendously because I could only use 'shape' to distinguish them.

Beware of overly flat-styled themes. I recall when windows 10 initially came out, the scrollbar slider (that you click and drag) was slightly off white on a white background with NO way of changing it. It was so hard to see and it caused a discernible pause when looking to see where it was. A new trend is making the scrollbar auto-hide which is another annoyance that's being adopted in many applications these days. I really admire the Dopus developers that have given us the ability to even control the scrollbar color, thanks!

Icons are a powerful language in themselves, and the right icon can be strongly mnemonic. In addition they are true space savers. Even a 16x16 pixel square can communicate far more than several letters in a word, in fact a icon can be worth more than just 100,001 words and be recognized faster. Iconography is actually a very rich science worthy of intensified study.

This interface may look like it's simply eye candy, but under the hood of these icons execute nuclear functions, there isn't an arbitrary pixel present here. I have deployed arrays of icon police that hunt goofy looking icons and delete them without a trace, I strictly enforce a zero-tolerance policy around here, my CPUs have no time to idle.

Many thanks for the icon set!!