Up front: this is new to me. So far I have been sharing files using Google Drive, but coincidentally 'discovered' that I could use a USB cable.

I connected my Samsung tablet to the PC and it showed up in both Opus and Windows Explorer.
However, in Opus all folders were empty, in fact, the folders weren't displayed in the right panel.

Maybe there is no support (yet)? Or maybe I should change some setting? 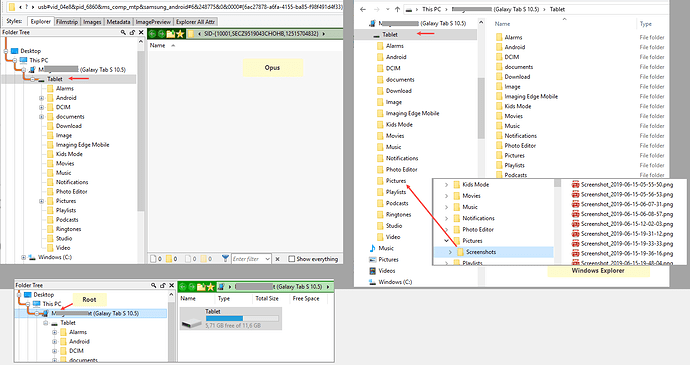 Try double-clicking in the file display instead of using the folder tree. For some reason, the tree is a problem on some phones.

Using FTP and Wifi instead of MTP and USB is also highly recommended in general, as it is far more reliable.

Not entirely sure what you mean by double clicking file display. For yr info, I went into the 'Screenshot' sub folder (see above) - Opus doesn't show anything.

When Leo says, "Try double-clicking in the file display instead of using the folder tree," he means he wants you to double-click screenshots in the pane where the files would be listed. Or to put it another way, do not use the tree to do your navigation.

@Leo, it appears in his original screenshot as if the file pane itself is not even populating with folder names. Going by his first screenshot (upper-left portion), what exactly do you want him to double-click?

@Leo, it appears in his original screenshot as if the file pane itself is not even populating with folder names. Going by his first screenshot (upper-left portion), what exactly do you want him to double-click?

Go to the root of the device first.

Thanks for getting back on this.

Double click - in my case - did not work, it expands sub folders, if any.
For me, r-click -> 'Open' was the solution.
(Note - 'Open in Directory Opus' wouldn't work)

Double click - in my case - did not work, it expands sub folders, if any.

You're still double-clicking in the folder tree.

Try double-clicking in the file display. That's the panel to the right if the tree.

(But I also repeat my more general advice: Switch to FTP with Android and things work much better, with the bonus of not needing to plug in a cable to transfer files.)

As for FTP - with all due respect and definitely no offense meant: reason for not getting into this FTP matter is that I am not familiar with it. As far as I remember I never used FTP. That aside, whilst checking Opus Help file, I believe(..) it is mostly related to websites.
At first glance I could not find anything relating to connecting to an Android device. Maybe it is easy, I don't know.

Thing is that at some point one has to consider 'Should I spend time on reading all this stuff and/or maybe need install I don't know what - try this and ask that in order to get it working, just for the occasional use'. In case of regular or daily use, I agree, it is different.
Again, no offense meant.

It's very easy. Just install an Android FTP Server ( e.g. https://play.google.com/store/apps/details?id=com.theolivetree.ftpserver is a free one that works well ).

Run it, and then tell it to turn on. It will tell you the details to connect to (address, username, password). Put the same details into the Opus FTP Address Book and you're done.

For some reason, the tree is a problem on some phones.

From my experience this is a common problem with ftp servers. It's best to start in the root folder and just double-click on folders and .. to navigate down and up.

From my experience this is a common problem with ftp servers.

AFAIK it's not a problem with FTP sites/servers, at least in Opus. Only with some MTP devices (phones/tablets over USB after they stopped supporting USB Mass Storage).

The latest beta is out now and has the fix for this.

Leo - up front, I didn't go the FTP way, instead I used Windows Explorer, which was okay.

FWIW ...
I just gave it a try and installed a trial version of Total Commander and XYplorer and see how they handle direct access of my Android tablet. 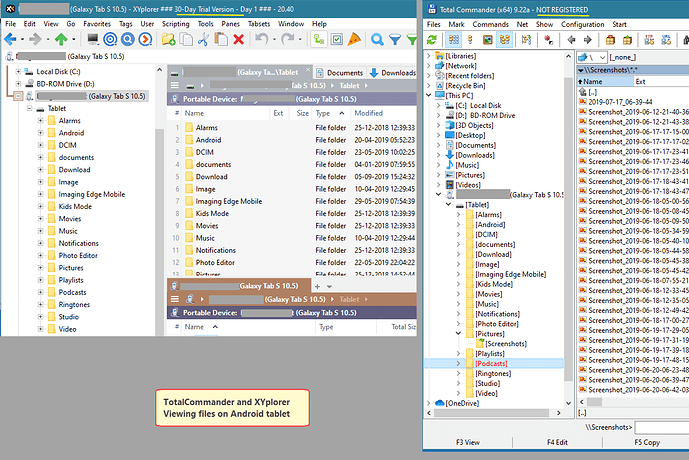 I noticed a difference in the the paths. Whereas the other tools showed 'Galaxy Tab S 10.5'
Opus showed something like:

The issue should be fixed in the current version, per Jon's post above yours.

If you still have problems, try toggling mtp_enable to False, which will delegate more of the work to the Windows shell. Although I would still recommend FTP as MTP doesn't always work well for long even in Explorer, in my experience.

About MTP: Opus includes built-in support for the MTP protocol, which many phones and tablets (typically Android ones) use to allow file transfer between the phone/tablet and your PC, when both are connected together via a USB cable. Some people fi…

Thanks for the reply. 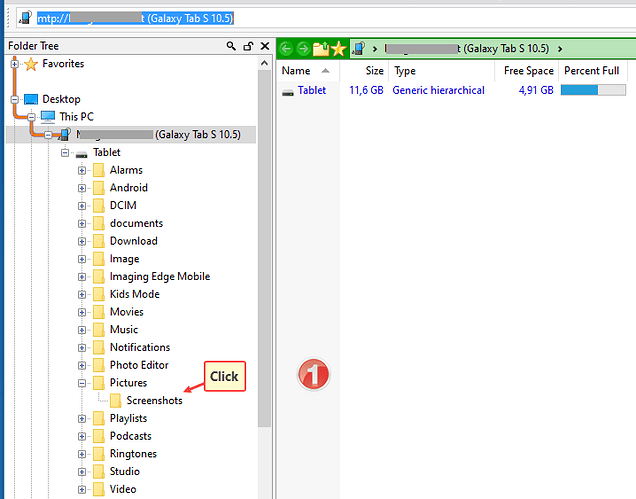 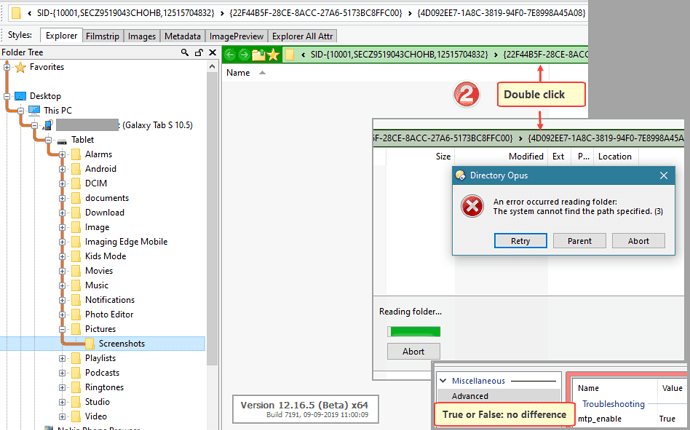 It would be nice to have feedback a little quicker than three months later. If we don't hear from you we assume everything's working.

You are right on that.