I'm not sure if you're aware of it but there is a new but old kid on the hashing scene: Blake3 (https://github.com/BLAKE3-team/BLAKE3). Blake 1&2 were already impressive and adopted by many projects & apps but the Blake team has outdone itself this time. Blake3 has built-in multi-threading and is extremely fast. Multi-threading is a feature which except Blake2 only few and obscure algorithms have. 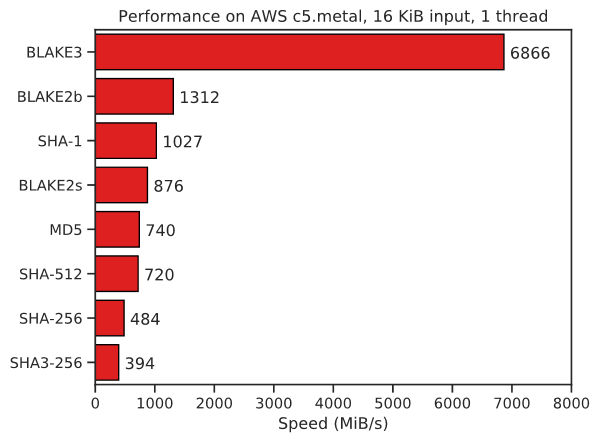 I can testify to their self-published benchmarks, based on my ongoing multi-threaded hashing development. In single-threading Blake3 beats the currently fastest DOpus internal algorithm SHA1 by leaps and bounds (300-310 MB/s vs 2.8 GB/s!), it's not even funny. And if I parallelize SHA1 with DOpus, cheat and perfectly optimize everything to SHA1's favor, only then SHA1 beats BLAKE3 but by a much smaller margin (4.8 GB/s max vs 2.8 GB/s) than vice versa. SHA1 wins only because I cheat in its favor and in an extremely unlikely situation; I reach with SHA1 typically at best 1.5-1.6 GB/s in multi-threading. And of course SHA1 is built-in to DOpus, as opposed to my script spawning CMD.exe processes for BLAKE3.

Leo said in this thread that there's a bug with files > 512 MB in SHA256 implementation. I wonder if you would consider including Blake3 when you revisit that part of your codebase or in a future DO release. Their binary release is apparently compiled from Rust but the Github page has all the C source code and docs.

Don't let it bother you.
The C-implementation is not multi-threaded as Rust is, but because of the SIMD instructions and the algorithm (something with Merkel-trees) the hashing is CPU-internally parallelized. Note the speed benchmark is single-threaded and on my machine I see very little difference in speed even if I disable multi-threading with "--no-mmap".

As the Blake3's team results show in the image in OP, in single-threading Blake3 is far faster than SHA1, and only marginally slower than multi-threaded Blake3. My script can beat it only if I cheat and use 1 identical file per CPU thread so that no single thread takes much longer than the rest. 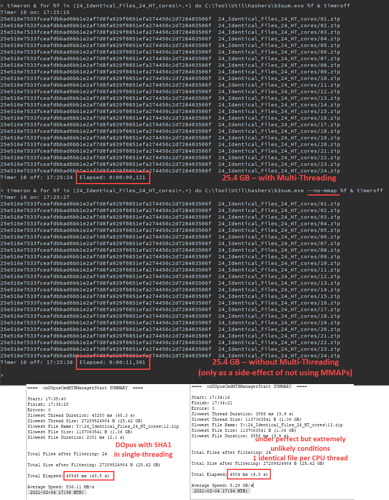 I would be grateful if Blake3 or SHA3 was incorporated into the program. MD5 and SHA1 checksums are obsolete.

They should not be used. Or rather, their use is not recommended.
Total Commander already uses Blake3. It's really fast.

MD5 and SHA1 checksums are obsolete.

You can use SHA-256 or SHA-512 if you're worried about very powerful organisations making two files look the same:

We may add more algorithms in future if there. So far you're only the second person to mention Blake3.