Can not update Meta data in Citrix File folder

FYI, the file under Citrix Files are made available offline.

What kind of file(s)?

If you edit those via the Properties dialog from Opus, does that work?

(Check it actually saves the results and they appear if you re-open the dialog.)

Yes it worked through Properties dialog from Opus (right click on the file).
I get the error message when I make a change to a field on Metadata Pane in Opus (i.e. delete a name from Authors under Document Properties). The deletion was saved but I no longer able to access to Metadata Pane after I receive the error message. Then I closed out Opus and opened it, and same thing happened again (which is, I get the error message when I change the metadata field, the change was saved, and no access to metadata thereafter). I reinstalled Citrix File, but no change.

Thanks for checking that. It rules out a few things.

With the Metadate Pane, does it work again if you select a different file and then select the original file again? Or if you close and re-open the Metadata Pane (without closing the whole window)?

Yes and yes when I make a change to a field through Properties dialog from Plus, but not through Metadata Pane.

Would it be possible to record a Process Monitor log of what happens when you try to change the metadata via the Metadata Pane? (Please also let us know the name of the file being modified.)

That might show us where things are failing, and from there we might be able to find a way to work around that.

I have sent PML file to you via a private message, please check. Thank you.

It's possible I'm wrong, but it looks like something is locking the file after it has been modified. That or something is causing problems with filesystem locks (op-locks in particular) in general.

In fact, it seems to be affecting File Explorer as well, for different operations (e.g. obtaining thumbnails), and not just on the Citrix drive:

Sometimes errors like that in ProcMon are normal/routine, but what makes me think these are real issues is the amount of time they are taking. API calls usually take ~0.001 seconds but some of these are taking 0.05 seconds to fail, which is unusual. Especially for files on the local C drive.

(Most of the C-drive files being accessed are .lnk files. I truncated the filenames to avoid showing any data that might be private.)

Something else I find curious, although not definitely the cause, is that Dropbox seems to be involved in all or most of these events, regardless of whether or not they involve a Dropbox path. (A couple of the files are under a Dropbox folder, but most of them aren't, including the two Opus ones at the bottom.)

The left screenshot below shows a stack trace of one of the last two events where Opus is requesting metadata information about a file. It's calling a Windows shell API, but Dropbox's DLL seems to have hooked and intercepted it.

The right screenshot below shows File Explorer requesting a thumbnail, and again the Dropbox DLL is getting involved, this time with a completely different shell API.

Whether Dropbox is modifying anything, or just passing the call through to the real API, I can't tell. It may be an irrelevant detail, but I thought it was interesting that it seems to be involved in these particular events. 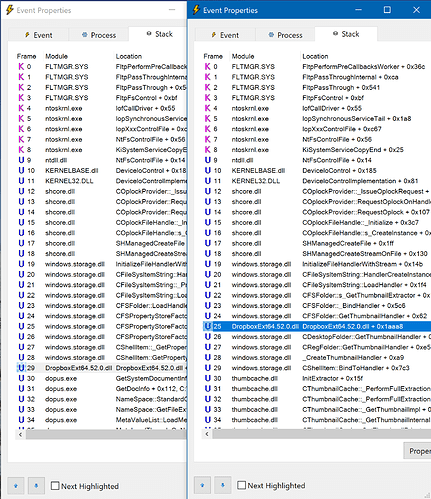 The log also shows some antivirus activity (in separate events) which makes me wonder if antivirus is scanning the files after they have been changed, and taking a while before it allows them to be accessed again. It may treat changes done in certain ways with more suspicions and do a deeper scan, perhaps.

Unfortunately, that's about all I can see. There isn't a clear sign of why those op-lock events are taking so long and then being cancelled, but it seems unusual to me, at least.

Leo, thank you for your comments. I tried updating Metadata in various ways (i.e. open Citrix and close drop box, open Drop box and close Citrix, both open, on-line, off-line, etc.) and noted updating Metadata in Meta pane in Drop box worked but not in Citrix. I got the error message when I changed Metadata in Meta pane in both Citrix on-line and local, however Metadata was updated through property/detail with error message. Something wrong with combination of Metadata pane and Citrix.
I'm using tag and comments field in Meta pane to show the file status (i.e. completed, WIP, etc.), since I cannot do it, is there any recommendation ?