Control Panel and DO 10

Seems that I can't open any Control Panel items from windows shell. There is no error message. When I try to open Control Panel from DO, I get a error message that just says "Unspecified error". (I had the same problem with DO 9.5.some.something).

Perhaps I have messed something up in the windows registry at some point of time. Any ideas?

Make sure Compatibility Mode isn't turned on for Opus. This guide explains how to check.

If that doesn't help, try backing up your configuration (Settings -> Backup & Restore) and then uninstalling Opus. Does Control Panel work then? If so, try reinstalling Opus.

Problem is still here after reinstalling.

Did you check the compatibility mode settings on dopus.exe and also the installer?

I did check the compatability mode settings.

I don't really know what I'm talking about here, but I seem to vaguely recall some Opus interface to Control Panel that was available in XP not being available in Windows 7. Could this be relevant? 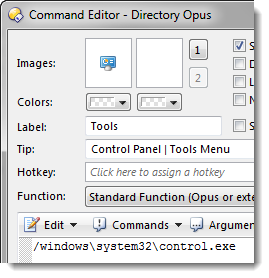 Make sure you're not running Opus as administrator.

Running as administrator had no effect.

Opus shouldn't be running as administrator. Make sure it isn't (details in the thing Jon linked to) as that's something that could cause what you're seeing.

Edit: A quick way to check is to try making a folder below C:\Program Files. If you don't get a UAC prompt and it succeeds in creating the folder, then Opus is running as administrator (or UAC is turned off).

Well UAC is turned off. Opus created a new folder in Program files without getting a UAC prompt.

Can you run any programs from within Opus?
Try turning off your anti-virus/anti-spyware and see if that makes a difference.

I can run any other programs from within Opus just fine. Control Panel issue is systemwide. Issue is only present when DO is installed and Explorer Replacement -setting is set to any other than "Don't replace explorer".

No difference when anti-virus etc turned off. (DO is whitelisted anyway).

This is a long shot but try double-clicking the Opus_SetDllDirectory_Disable.reg in the attached zip, then restarting Opus.

Opus_SetDllDirectory.zip (681 Bytes)
Important: After making the registry change, fully exit Opus and then restart it. (Don't just close all the Opus windows. Exit it completely as described in the linked post. If in doubt, reboot after applying the registry file.)

If it doesn't help, do the same with the other .reg file in the zip to go back to normal. (The normal mode is more secure, but causes problems for some shell extensions.)

That didn't work either.

Could you post a screenshot of the "Unspecified Error" message, in case the style of message box indicates anything? (e.g. that it's coming from Opus itself or from another component.)

You can attach screenshots by using the "Full Editor" to reply. (Don't use Quick Reply.) Just under the place where you write your post is a thing to let you upload files.

Here's the screenshot. I am not familiar with Process Monitor.