If you only want to affect visual settings then do not install configuration backups; only install actual theme files (.dlt).

If you install the .ocb file, be sure to backup your own configuration first so that you can go back to it. Use Settings > Backup & Restore to create a backup of your configuration.

The Dark Elegance theme has a simple presentation with tons of features, beauty, and power in an intuitive and dark elegant interface. Over 5 years of work and tweaking have gone into this theme. 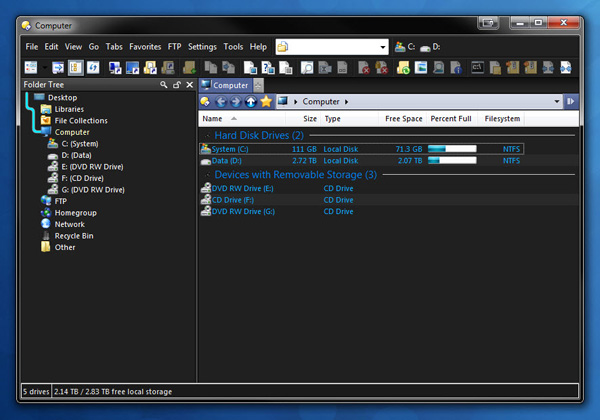 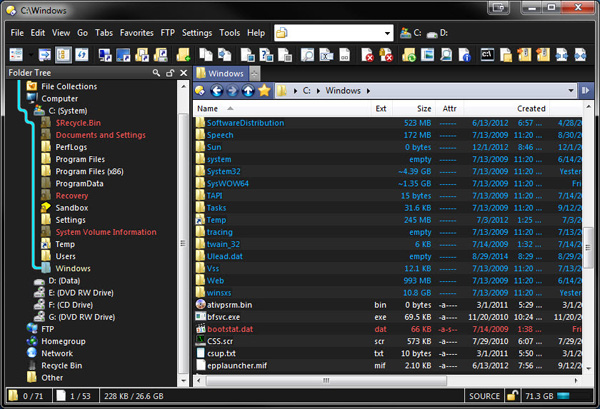 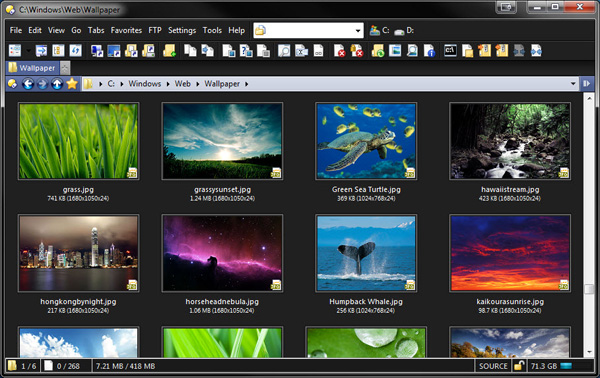 The themes in Directory Opus don't save all the colors so it's a backup instead of an actual theme because of the drastic dark color change.

Remember to back up your own configuration first.

If you want to see the default changing detail view and thumbnails based on content, leave the little lock in the status bar unclicked.

If you want to see a more simple list view, leave the icon locked.

This is one of maybe two or three themes found here, I'd actually use myself! Looks good! o) The column headers and scroll bars stick out a bit I think, their colors cannot be adjusted I guess?

Thank you. If you can figure out how to change them, please let me know. I would love for them to be dark. I think those are based on the Windows colors.

One thing that I love about the color scheme, the folders are also blue in a Unix or Linux system. It really helps to visually differentiate them. And Favorited folders will appear even brighter blue to let you quickly know those are important folders. Originally, I was trying for something close to the famous Tomorrow color theme (link) that was made to enable improved focus and to reduce eye fatigue when having to use the computer for long periods.

If you did not find out how to change headers and bars, then I'm really the wrong person to ask. o) I do change colors here and there, but never tried aggressive changes.

I had a look into your download to extract what may possibly be "the theme" or "the colors", but it seems those cannot be pulled out without taking over several other prefs, which is something I won't do, as I will never ever overwrite my setup for colors and looks, I value my functionally finetuned DO higher than it's appearance, so I guess I have to live on with my "windows 2000" look. o)

For anyone who likes the interface but prefers the original lighter theme:

Hope you can post the dark .dlt files here also. Or is there a way to extract it from the .ocb file?
Thanks,
Darren.

Very simple to install ? I clicked on the link ; but the download gives a .zip file , which decompresed has no .ocb file in it how to install after domnload ? thanks in advance

OCB files are configuration backups, which you can load and save via Settings / Backup & Restore.

I recommend backing up your current configuration first, since loading the OCB file will completely replace ALL aspects of it (NOT just cosmetic settings).

I'm sorry if I appear a bit dense, but why post the OCB file instead of the DLT file?
Presumably you wouldn't want to override your own settings, and if you restore your own OCB file, then you override this rather nice theme...

Maybe because of this? Don't know exactly, I'm not into theming things. o)

The themes in Directory Opus don't save all the colors so it's a backup instead of an actual theme because of the drastic dark color change.

Is there anyway to scale the GUI of this application when you're working on a high resolution set. Example shown below on a surface book running at 3000 x 2000. Try the Opus 12 public beta. Full support for DPI scaling is one of the new features.

With Opus 11, you can also manually adjust font sizes and install larger icon sets, but it is not automatic and does not affect all icons as in Opus 12.

I was trying to download the theme but I have unable to. I am only getting 1.64 MB file. I am unable to install from that file. I too have difficulty in the light colored backgrounds and this would be great!! Is the a file with only the .dlt files to install.

Thank you for any assistance.

1.64 MB seems the correct file size. I expect the file was changed but the post wasn't updated to reflect the smaller size.

I would not recommend you install a .ocb config backup (especially if using Opus 12, since it's from Opus 11 and you'll lose some of the new buttons and menu items).

You can rename the .ocb to .zip, you can look inside it to find elements you might want to integrate into your own config.

However, it doesn't seem to use any background images, only solid colors, so you don't even need the download if those are all you want. You can grab them straight off of the screenshot, via Preferences / Display / Colors and Fonts and the eyedropper you can drag out of the color selector.

A horrible theme. It took away the two folder panes.
Next time don't call it ultimate anything!