Starting this thread for anyone who has tips to share about updating to DO11.
E.g. starting fresh, customizing, conflicts, anything that comes up.
Planning to have a go over the coming days.

I just have to get my head around the massive list of changes.

Is there a PDF file of that list that we can memorise?

I am going to wait for a few reports before I make the plunge. As a "powerless" user, I am going to leave it to the experts to dive in. They can provide useful feedback.

I don't think we have the preliminary change list in PDF format yet, but that will come in time once the manual updates are done. (Not sure when that will happen, though. We're still making changes to the program, let alone the manual

Your status bar settings shouldn't be lost, you should find them again if you switch back to the old status bar mode.

Switching to "single-mode" showed the old code, thanks.

Also nice: Toolbars can be switched on/off depending on view-mode. Damn, I'll spend the whole day on configuration instead doing other important things

Finally got around to installing the beta.
This was a really painless update on top of DO10!!! Thank you Team Opus.

So what features have you guys implemented?
So far, I'm using the path bars at the top of each dual lister.

Looking for ideas of other features to use.
Often a new feature only "clicks" for me when I see it on Leo's videos or when one of you guys explains how you're using it.

[quote][i]Folder Formats can automatically turn on a toolbar (or a toolbar set).

The Folder Formats system now lets you specify a toolbar or toolbar set that is to be turned on whenever that format is in use.[/i][/quote]
Awesome idea. Give it a try... Preferences / Folders / Folder Formats 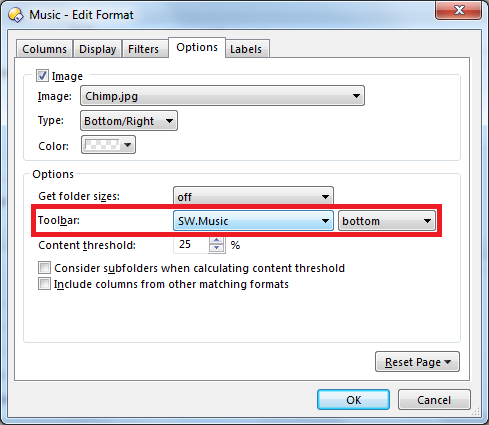 Awesome idea. Give it a try... Preferences / Folders / Folder Formats

Well I feel like a dork... I have two toolbars that I feel work [del]great[/del] amazingly well (the ones on the site in my sig), and haven't yet come up with other toolbars for specialized tasks.

So how many toolbars do you have? What are they for? Sounds like it might be time for me to branch out.

[quote]Awesome idea. Give it a try... Preferences / Folders / Folder Formats

Well I feel like a dork... I have two toolbars that I feel work great, and haven't come up with other toolbars for specialized tasks.
How many toolbars do you have? What are they for?[/quote]
I have one toolbar for music related tasks... links to mp3tag, idtag... convert to coverart.jpg commands, links to favourites and a few rename commands. Obviously I don't need this on all the time so making it available when switching to my "music" folder format is awesome.

I also have toolbars for "video" and "ebook" related stuff although these are quite sparse at the moment.

This brings home how lame my life has been in the past few years---haven't had to deal with audio files, apart from audiobooks.

Let's talk vids. What's on your toolbar?
For vids I don't have a toolbar, but a few shortcuts:

I have one general purpose toolbar with functions such as Toggle Tree, Save this lister (optionally as default), Open Start Menus in Opus, Open Control Panel, Open Find layout, Backup my config, etc. It resides between my dual horizontal layout windows in my default layout.

Apart from that, I have left the rest alone as issued, with one exception, I have added a Drives dropdown to each of the File Display Border toolbars, just after the breadcrumb field.

Apart from that, I have left the rest alone as issued, with one exception, I have added a Drives dropdown to each of the File Display Border toolbars, just after the breadcrumb field.

You can access drives directly from the breadcrumbs field itself... 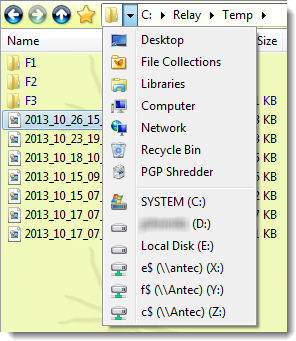 I added a button to go to the desktop, since I use that a lot. 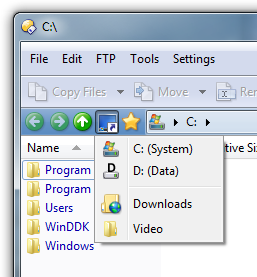 Hmm, thinking about it, I might move the whole Favourites menu into this as a sub-menu to save some space. I use Favourites more as a way to keep track of folders I need once a month that are in obscure places it takes me time to find otherwise, so moving it an extra click away to save space is probably a good trade-off for me.

@Leo: Which arrow-icons/iconset you're using (they're not the default ones or from a set I know)?

I think they are from the Directory Opus 10 XP Icons set that Cris made.

I'm not totally happy with the blue or green icons on the darker blue background (and tighter margins) of the file display toolbar, but haven't got around to trying other alternatives. The green ones show up a bit better but I think the best thing may be just having arrows without the circles. I haven't tried that yet, though, so I don't know if it will work as well as I think.

I'm really excited about @set and @toggle, and look forward to seeing these commands develop through the beta.

Here's a nice button I'm using that toggles if my lister is set to anything other than "sort by filename". It's helpful when in thumbnail mode where it's easy to get confused about how files are being sorted. One click on the button and sorting by filename is restored. I actually use it as a "sort by" menu button. Handy!

I was going to say that you don't need @toggle for that, but then I noticed you're reversing the toggled state there so it makes sense.

FWIW, there is a similar button (along with ones to sort by Modified date and Shooting date) on the default Thumbnails toolbar, since we felt the same. It was always a pain to change how thumbnails mode was sorted before, plus the space that the thumbnails size slider took up on the normal toolbar, so it's great to have an extra toolbar that can appear when in thumbnails mode but not use up space in details mode.

I have another suggestion, for which i don't want to open an extra thread: in addition to the automatic toolbars for view modes, what about some path triggered automatic toolbars?
So, the path bars would show only, when entering a specified path/directory. That would be useful, if those toolbars are only needed for new entries in the photos/music/movies department, for which
i have special folders.