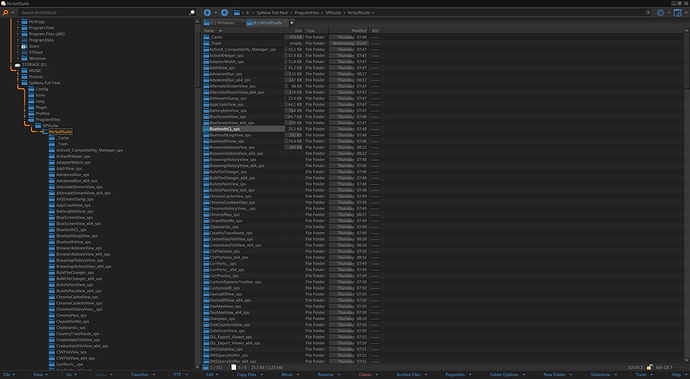 Hey folks,
This is my first attempt in theming our beloved browser. It took me some time and it is not yet finnished, but since there was a request to upload it - here it goes.

It also includes .ico files for the folder icon and two .reg files - one for the default folder icons and one for some color changes in Windows7 default GUI.

Now for starters, the whole setup is highly customized - it uses different scripts, third-party programs and other small changes so there might be some buttons or scripts that will not work properly on your systems. Some of the settings I made directly in Windows Registry, so if you want EXACTLY the same look, you will have to do some under-the-hood work. There is an included "Manual" that is disguised as Install Notes.txt, copy/pasted below.
The setup is WIP so some menues are a bit messy.

!!! Back Up your Registry before the next steps !!!

The folder icons are changed in the Registry.
3. Add Folders.reg to your Registry
To install them, copy the two .ico files in C:\Icons (you can change this path in the Registry editor - after adding Folders.reg search for key HKEY_LOCAL_MACHINE\SOFTWARE\Microsoft\Windows\CurrentVersion\Explorer\Shell Icons

To make the setup fully functional you will need to install NIRSoft FolderChangesView, SearchEverything, as well as the included Apocalypse's SearchEverything.exe integration binnary. That one should be copied in SE instalation folder.

SearchEverything: Getting Opus to work with Everything v4.0 Tutorials

NEW VERSION 4.0.0.0 Released. Download below. >>> INTRODUCTION Everything** is, as some of you already know, a nice little program similar to Indexers like Google Desktop Search and Windows Search except it is a lot smaller and takes less than 10…

It might make sense to link to the icon sets, scripts and tools used, so people can find the latest versions of them and other details. Otherwise you'll have to keep updating your zip when any of the dependencies change.

Cool beans. I'll play with this over the next couple of days. Thanks, Exidus.

Copy the four folders in /dopusdata

Pardon my ignorance but where does one create the /dopusdata directory? Do you mean C:\dopusdata i.e. at root level? Because this is the location, I assumed \dopusdata = C:\dopusdata i.e. at the same place as the icons files which according to the installation instructions are at C:\Icons. I am usingWindows 10 do you think it will work with that OS also because at this point in time I am not seeing what you show in the screen capture. Would it be possible to make a bat install file for the less educated like me?

/dopusdata is a folder alias. Type it into the location field and push return; Opus will then take you to the appropriate folder on your system.

Love the theme in the screenshot but can't get this to work at all. Folder ico not linking (get the broken img icon), no colours or configuration changed.

Hi @indigo !
Sorry for your troubles
Lets try to fix this

where did you put the .ico files?

Hi Exidus, I put the .ico files in A:/icons and set the path in each of the reg keys.

But I couldn't get anything to change at all; the only result of following the instructions given was that the folder icons broke- other than that Dopus just looked as per the default installation..? Guess I must be missing something obvious.

I put the .ico files in A:/icons

What OS are you using? Windows dont like things in A: as principle...
Maybe this is the problem?

I use A drive as an encrypted portable partition for my workstation. It works better for portability, navigation, and synchronisation.

I don't see why it can't read stuff from there just like any other file path.

try to move them in C: just to leave this option aside.
Also for the skin part - where do you copy the folders from the archive?

Thanks, only thing is I'm a little scared to touch this again because as I mentioned I was unable to restore the backup from the .reg file ("unable to read the file"..?). I fixed it just by manually deleting the two new keys that were added for the .ico files, which seemed to work. I'm hoping there's no other unforeseen problems going to arise from doing that.

To answer your question, I put the folders into the /dopusdata directory, replacing the ones of the same name that were already there.

I'm a little scared to touch this again

Dont worry, it will not mess up anything else.. as for the faulty backup registry - it happens unfortunately...

I put the folders into the /dopusdata directory, replacing the ones of the same name that were already there.

After loading the theme, some parts working (main dark grey) but most other parts not working. Example: breadcrumbs file path still the default white, among many others.

Thanks for your help, but will probably give up with this now.

I'm happy slowly configuring things to suit my needs and tastes from the default set up as a starting point.

This must be one of the worst install instructions I've ever seen.

I know its a bit complicated but the theme was never ment to be released. I did this because I was asked to by some members here. I have specified that it is not complete nor bundled fully to be a one-click install.

This is not only a DO-theme, it also modifies the Windows Theme, which is always risky and can lead to unwanted behaviour!

So all people crying here, just only use the theme. But if you want to change the Windows-icons to have individual ones and don't know what your're doing, leave it or do it on your own risk and stop crying. Thanks.

NIRSoft FolderChangesView does not install, it's a portable exe. So, what exactly do we need to do with it?