This is caused since I add The Format Lock ({fl}) to my status bar. If I come closer with the mouse over the padlock icon this happens: 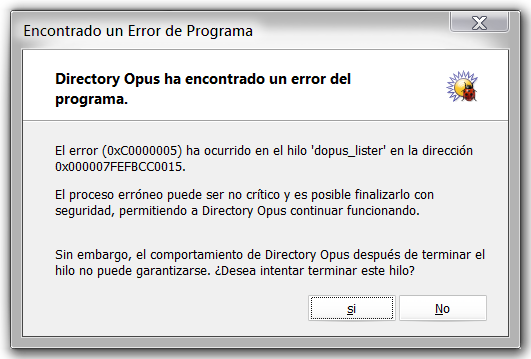 If I take away from the status bar the Format Lock icon, Dopus work normally.

Does a minidump get created for the crash? The FAQ list in my sig links to a page on how to find them.

It's possible the translation you're using has a string format wrong, but that's just a guess. If you can find a minidump and/or check if it happens with Opus set to English that should help narrow it down. (Do a configuration backup before changing language just in case.)

Yes, there is a crash report file.
Besides, i change the language to English, and the problem continues. 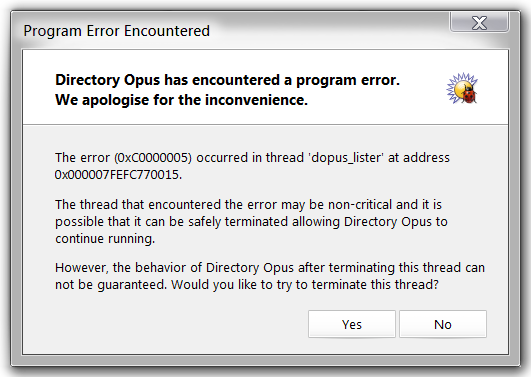 What if your status bar is configured to show nothing but the icon?

Also, if you open a new Opus window by double-clicking a folder on the Windows desktop, does the icon still cause a crash?

(When you hover over the icon, it should show you a message explaining where the current folder format comes from.)

What if your status bar is configured to show nothing but the icon?

Also, if you open a new Opus window by double-clicking a folder on the Windows desktop, does the icon still cause a crash?

So... any idea about how to fix this?

I can't think of an obvious explanation for why it's crashing for you but not anyone else (so far). Haven't had a chance to look at the code in depth yet to see if anything looks like it might be the cause.

(Also note that we're very busy with so many questions right now, and it's only been Friday night until Sunday night for this one. We're not ignoring it, don't worry.)

I still haven't been able to reproduce this.

Could you post a screenshot showing the full lister window, the moment before the crash happens, and indicate where you are moving the mouse to to trigger the crash?

I've tried turning off the tree header, and even moving the format lock so it's right under the tree so I can move the mouse from the lock directly up into the tree, but I've still never seen it crash. 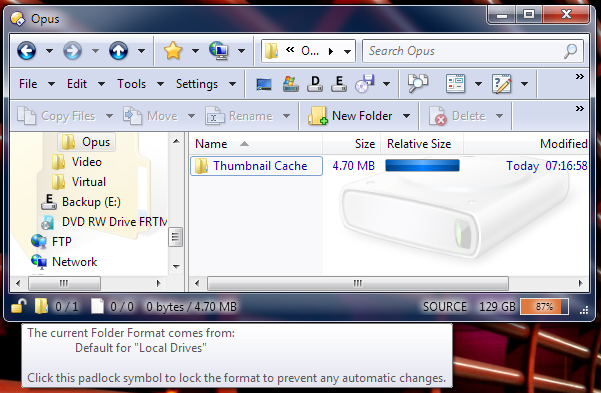 AFAIK the posts in this thread are the only reports of this so we don't have much to go on. I'll make a special debug build for you both to try if seeing a screenshot of what you're doing still doesn't let me repro the problem.

Hi leo,
I made some Screenshots of my foldertree-Settings and the crash for you. The crash also happens if I move the "double-path"-Toolbar between stausbar and foldertree to the top of the lister. It's on Win7 64 with a modded basic theme.

Could you...indicate where you are moving the mouse to to trigger the crash?

It definitely only happens if I move the mouse upwards to the foldertree. Moving to the entry "details" first and then up or moving to the left out of the lister doesn't crash DOpus.

The "double path"-Toolbar does not prevent the crash to happen. It occurs immediately when I cross the upper border of the stausbar in the icon area even if the toolbar is present. When a lister or the preview window or something else is above the icon the crash does'nt happen.
I should have configured my screenshot-tool to show the mousecursor.

It looks as though there are no icons in the file, and the OS is utilising the default icon.

It looks as though there are no icons in the file, and the OS is utilising the default icon.

That sounds like a different issue. This thread is about a crash that happens when hovering the mouse over the lock icon on the status bar.

If you can provide a copy of an exe which causes the problem we can fix it. (But if you haven't already, check with the latest beta version as it may have been fixed already. We addressed some bugs in this area in the beta versions and those fixes haven't made it into the non-beta versions yet.)

It definitely only happens if I move the mouse upwards to the foldertree. Moving to the entry "details" first and then up or moving to the left out of the lister doesn't crash DOpus.

Thanks for the screenshots & description, they help eliminate a lot of the unknowns.

I'm still not able to repro the crash, but if it involves the tree then it might be something we fixed by accident in 10.0.0.3 (link in my sig), as there are some changes to how the tree is drawn in the new beta.

If you do, and you have time, could you backup your configuration (Settings -> Backup & Restore), then do a full uninstall & reinstall of Opus and see if the crash still happens for you with a completely default config? (After doing that test, you can restore your config backup to get back to normal.)

If it still happens with 10.0.0.3, and even with a default config, then maybe triggering it requires a specific version of Windows and/or graphics card/drivers. If so, let me know what you're using and I'll see if I can test on a similar setup.

Hi leo,
I did everything you suggested. The crash also happens with version 10.0.0.3 and with a fresh install without changing anything in settings (not even the "hide folder-structure-header" or moving the formatlock-icon to the left side)! So it's very obvious now that it has noting to do with the foldertree. The crash always happens when I move the cursor into the tooltip-popup. It doesn't happen if I stay in the icon area until the popup disappeared or move the cursor away from the popup. I also tried to exit all processes which aren't essential for the System (e.g. the little tool providing the extra-Buttons you can see in my Title-bar) without success.
Here's a screenshot of "Speccy" showing my Hardware:

Can you try turning off WindowBlinds as well?

The Nvidea driver version I currently use is "266.58_desktop_win7_winvista_64bit_international_whql.exe". I'm not really happy with this. I tried a bunch of other versions because I had (and have) some trouble with my TV-Application "DVBViewer" and the Tray-Menu of "TVBrowser" which often leaves some "leftovers" of the menu on the screen.
I used "Phyxion.net Driver Sweeper" the last time I changed the driver.

@jon:
I don't use WindowBlinds. The only Stardock software I have is ObjectDock but I currently don't use it because it also makes trouble together with TVBrowser. I currently use a DOpus docked floating Toolbar instead

.
The Theme you see is a modded Basic Theme downloaded from DeviantArt which uses a modified "Aero.msstyles".

I tried the "Windows Classic" Theme which doesn't use the modded "Aero.msstyles" to see if the crash is triggered by this but the crash continues to happen.

The error happen when: I go over the padlock icon and wait for the tooltip(nothing more). The tooltip comes out, then I move the cursor up. (to the DOpus window)

If I move the cursor to the taskbar, then to DOpus, nothing happens.

If I go over the icon, and pressed the icon(to lock the format or viceversa), nothing happens.