Hi there, is regards making Directory Opus the default for opening directories on Win 10.
My setting is configured for "all folders" in: Preferences / Launching Opus / Explorer Replacement.
I double click a desktop folder, it uses explorer. My settings are attached.
Any ideas?
Thanks,
Darren. 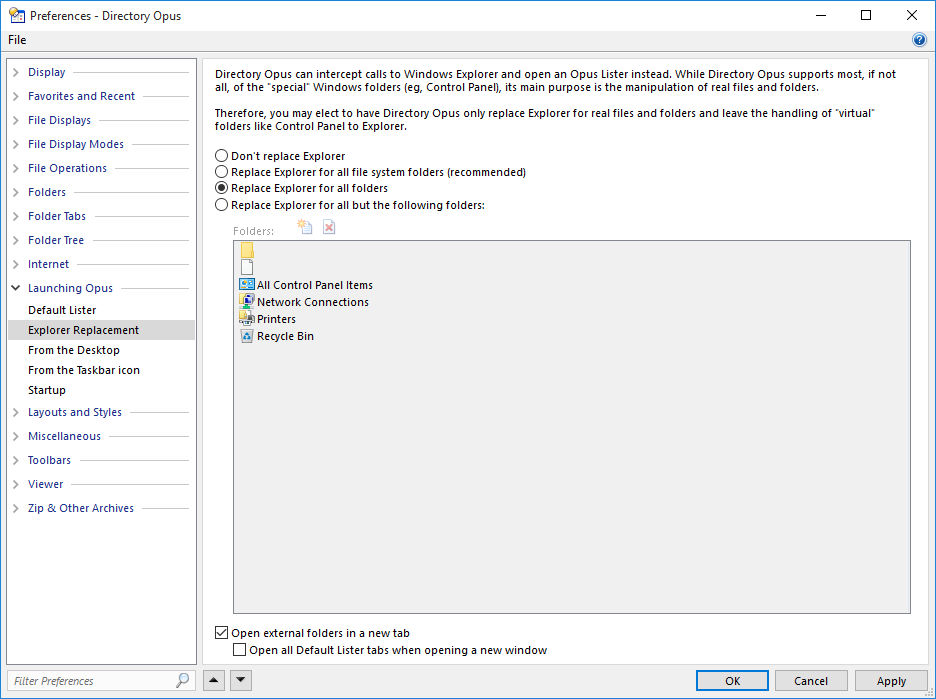 Maybe a bit of a cliche, but have you tried turning it off and on again?

Try selecting Don't replace Explorer, then click OK, wait a few seconds, then go back in and select the recommended setting and click OK again. That should re-write the relevant registry settings, in case they're damaged. (Note: It can take Explorer a minute or so to respond to the change, and it may continue to use the old settings before it has.)

If it's still not working after that, please run FileTypeDiag and click Save without typing an extension, to export the folder registry settings to a text file, and attach the results for us to look at.

Hi, thanks for reply.
I have done the above. also DO is not set to run as admin. It is also NOT to run in compatibility mode.
This just started happening, it used to work fine.
The .txt file attached.
Thank you.

Something went wrong, I think. There's no .txt file.

Please go to HKEY_CURRENT_USER\SOFTWARE\Classes\Folder\shell\openindopus and delete the LegacyDisable value which something has put there to hide/disable the action. It should then work.

Hi, thanks.
When you say: "delete the LegacyDisable value", you want me to delete this: 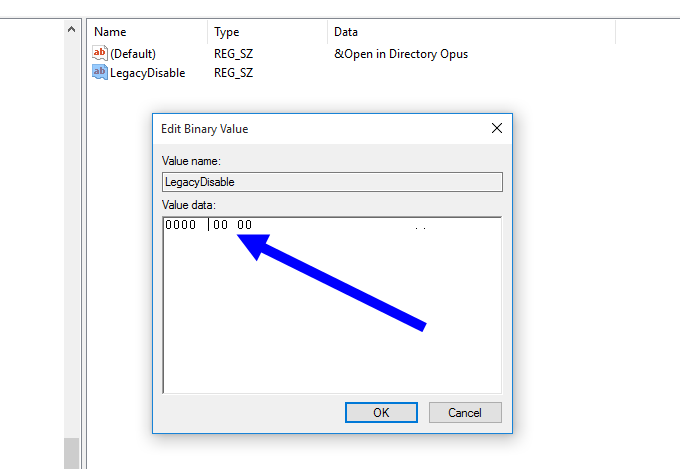 The first one. Right-click the word "LegacyDisable" and choose Delete.

That did the trick Leo, thanks a lot for the help.
Back to work...

I'm having exactly the same problem, but this didn't fix the issue. What else should I try?

Which things have you tried so far? There are multiple suggestions in the thread.

I tried the enable/disable (no change) and the registry changes (key not found). I am attaching the log file. Thanks!
Folders.txt (170 KB)

Make sure dopus.exe has not been launched as Administrator, as that would stop non-admin programs from being able to tell it to open folders.

If that also doesn't help, can you describe exactly what is and isn't happening? e.g. Which folder do you double-click, from which program, and what happens when you double-click it?

I've just just noticed that the integration works only when I open icons from the desktop (i.e. Recycle Bin or any other folder I create there). However, it doesn't work when using the icons on the task bar or from "File Explorer" in the start menu. When I say "doesn't work", I mean that the regular windows explorer is launched instead of Opus. Thanks!

If you explicitly run File Explorer from the start menu, it'll open File Explorer. That menu item launches a new copy of explorer.exe and we do not aim to stop you using Explorer when you want to launch it, since that is sometimes useful. (Although we do, unintentionally, trap the different File Explorer item in the menu you get when you right-click the Start button, because that doesn't actually launch File Explorer, it launches a folder, under the assumption File Explorer will always be the default file manager. The Start menu's two File Explorer menu items thus do not both do the same thing, strangely enough. But that's up to Microsoft. Update: We have a workaround for that coming, too.)

I think folders pinned to the taskbar are explicitly opened in File Explorer, since it's all part of the explorer.exe and the taskbar takes shortcuts in how it launches folders in some places, on the assumption it will always be the default file manager. We do not have a way to intercept that, and Microsoft also haven't provided a way for Opus to be able to pin folders to the taskbar via an alternative method that would launch them in Opus.

Ok, got it. I am just a returning user back from the times of Opus 6 under Windows 9x. Things have changed

I got the same issue : Win+E don't start dopus, but explorer. Double clicking on the desktop run dopus.

I have attached the txt file.

Could you help me ? I really like to use dopus by clicking on Win+E.

Does double-clicking folders on the desktop (not the desktop background itself) open them in Opus or Explorer?

Make sure no Explorer windows are currently open when you push Win-E, else they may be activated instead.

Thanks Leo for answering !

Does double-clicking folders on the desktop (not the desktop background itself) open them in Opus or Explorer?
-> In Dopus

Does right-clicking the same folder and choosing "Ouvrir dans Directory Opus" work as expected?
-> Yes, it's open Dopus on this folder

Make sure no Explorer windows are currently open when you push Win-E, else they may be activated instead.
-> I have checked : I don't have any explorer windows open.