Folder Tree to display only a designated folder and its contents

Is there a way to isolate a particular folder so that nothing but that folder and its sub folders are displayed in the Folder Tree?

I commonly have more than one instance of Directory Opus open. And of course, the Folder Tree panel in each instance always displays all of the higher-level folders (ie from that folder up to Local Disc (C:) then This PC, etc), as well as the items typically displayed further down the panel such as other drives, Network, Homegroup, Recycle Bin, File Collections, Libraries, & FTP.

I think my use of Directory Opus would be much more efficient if I had the option to designate/configure a particular instance to show — in its Folder Tree panel — nothing but one particular folder and its contents.

PS Prior to posting this question, I saw another thread (18877) in the blue "Your topic is similar to..." box which seemed to be addressing the same question:

Is there a way to FOCUS on a particular directory?

Is there a way to FOCUS on a particular directory? Help & Support

Newbie here - Is there any way to restrict a particular Lister to a particular Folder and all of its sub-Folders? In other words, I want to see the normal hierarchical view, but I want the root directory to be a specified Folder (such as “My Documen…

Leo's suggestion there was to:

Hold down shift, right-click a folder in the tree, then choose Root Tree Here (should be near the top).

I tried Shift+RightClick on a folder in the Folder Tree but do not see the option "Root Tree Here" in the resulting menu. In fact, I get the same menu when I RightClick whether I'm using the Shift modifier or not.

I also searched the docs for "Root Tree Here" but came up empty.

The previous post is from 2014 so is that process obsolete due to it being a different DOpus version (I'm running DOpus Pro v12.7 x64, Build 6540)? Or am I doing something wrong?

By the way, further down in that thread, Leo suggests using the "Set TREEROOT" command but I am not familiar with that or how to apply commands (in DOpus) in general, nor do I know for sure if the other thread is asking what I'm asking.

I tried Shift+RightClick on a folder in the Folder Tree but do not see the option “Root Tree Here” in the resulting menu.

It should be there, near the top of the menu.

Which folder are you right-clicking? Try with a normal local folder like C:\Windows to make sure the menu item works at all, in case it wasn't working due to something special about the folder you were trying with.

See How to use buttons and scripts from this forum.

Thanks for the comments Leo.

Here's a screenshot showing the Folder Tree along with the menu I get when I RightClick or Shift+RightClick — the menu is the same either way. 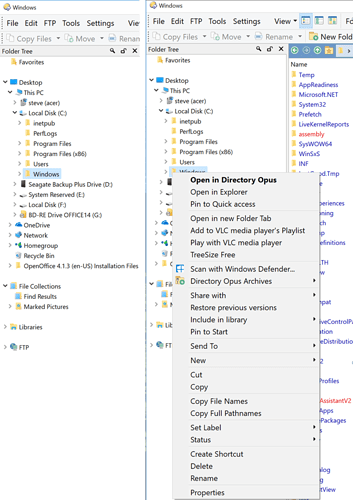 Here's what should happen with a shift-right-click: 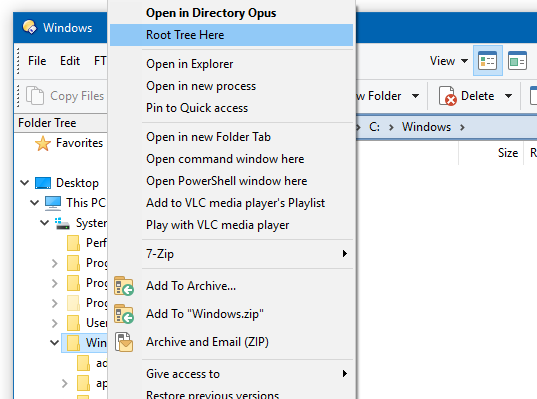 I've looked at the code and can't see any reason why it would only appear sometimes (for C:\Windows, at least).

Just in case, this is what I am doing: