I'd like Dopus to always move files on drag-and-drop regardless of moving between same or different drives.

Therefore, I followed the respective HowTo resulting in the below setting for Drag-and-drop actions: 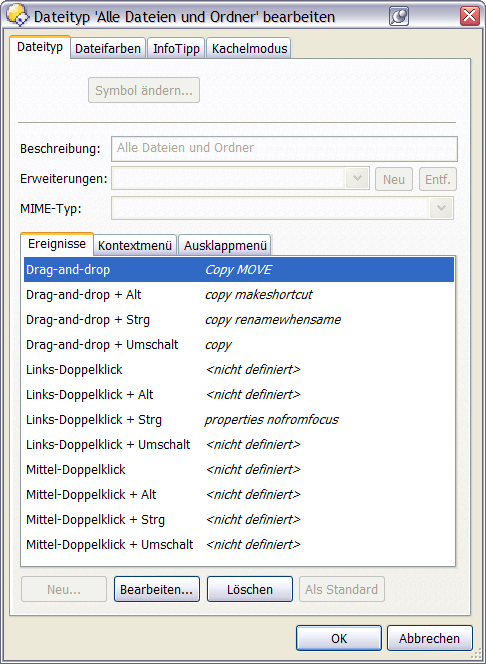 I still get the cursor with the plus sign when dragging files to another drive.

WAIT: the moving of files actually does work as expected, but now the cursor is wrong:

How can the cursor behavior be made reflect the copy/move action correctly?

The cursors will be incorrect if you change the default drag & drop options. (I'll add that to the FAQ to warn people.)

It's annoying but also apparently painful to fix; hopefully one day it will be.

The good thing is that if you've changed the filetype so it always moves then you can ignore the cursor as you know the drop will always result in a move.

Thanks Leo, for the fast reply.

Hopefully this will be fixed one day since it makes working with files less intuitively and less secure (if in a hurry), because you might end up with moved files where you'd actually might have had the intention to copy and vice versa...

[quote="DavidP"]Thanks Leo, for the fast reply.

Hopefully this will be fixed one day since it makes working with files less intuitively and less secure (if in a hurry), because you might end up with moved files where you'd actually might have had the intention to copy and vice versa...

I'd like it fixed as well but it's never caused me an actual probably because I know drag & drop will always do a move and ignore the cursor. I didn't even know which cursor was which until recently.

Despite the supposedly correct setting: 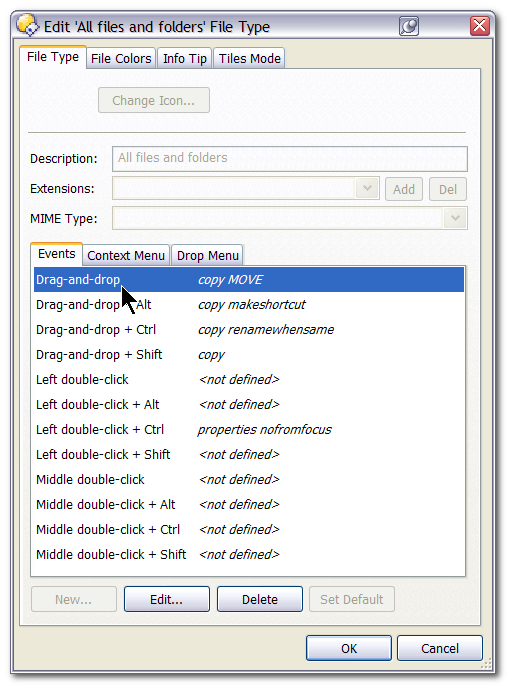 now 1st the cursor with the plus sign is "wrong" (as before) AND 2nd files get copied (again) instead of being moved...

Where are you dropping them? In the Windows model it is the target of a drag & drop event that controls the action - this means that dropping files in virtual folders like the desktop are handled by Explorer, which will still obey the standard system rules for when to move and when to copy.

I am dropping the files onto a shortcut that points to a folder.

Apart from that, moving files directly between folders actually does work as expected.

Unfortunately, as I do a lot of quick tidying up using shortcuts to folders, it seems that I will have to take care to actually move instead of copy every time.

Maybe a custom command could be created and assigned to the drag-and-drop action kind of like "copy, then delete original file"?

Dragging on to shortcuts is a special case. I'm not sure how you would change what happens there.

If you drag a file to a shortcut using the right mouse button you'll see that there is only a Copy option and no Move option. I'm not sure what defines the context menu that you see, though. It isn't the Drop Menu from the filetype, it seems to be something special, and defined by Windows rather than Opus, that is displayed when you drag on to a shortcut.

Well I'll drag onto tabs instead of shortcuts until this is resolved.