I'm trying to create a "GodMode" folder in Windows 8.1 (64-bit) that allows one-click access to most all Windows settings. Unfortunately, it doesn't work because I use Opus as a replacement for Windows Explorer.

The normal procedure for creating a GodMode icon using Windows Explorer is:
The first step in the path to GodMode involves creating a new folder, so head to your desktop and right-click, then select New>Folder. The "New Folder" text should be highlighted underneath the folder, allowing you to change its name. If not, right-click on the folder and choose Rename.
Copy and paste the following text in as the folder name, and then hit return: GodMode.{ED7BA470-8E54-465E-825C-99712043E01C}
Your folder should convert into an icon that looks suspiciously like the Control Panel.

If I manually start Windows Explorer, I can create the folder (icon when finished) and it works correctly.

As soon as I close Explorer, the icon changes back to a "folder" and I can no longer access the GodMode window when clicking on it.

Apparently it only works with Explorer and, because I use Opus as an Explorer replacement, I can't make it work.

Does anyone have an idea how I can do this and still keep Opus 10 as an Explorer replacement?

Thanks so much for your helpl and time. 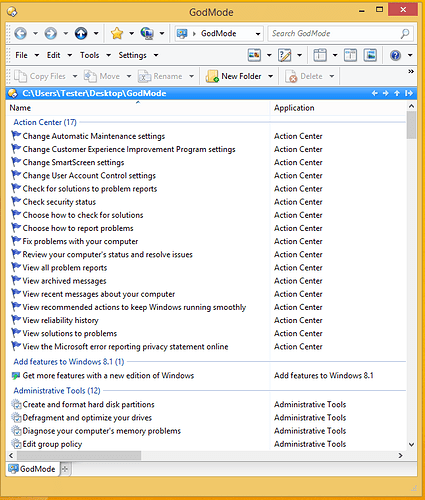 Thanks so much for your prompt response. I appreciate your help.

Unfortunately, it still doesn't work on my computer. I created the folder using Opus, gave the folder the proper "name", and it appeared on my desktop correctly.

But when I double-click the icon on my desktop, this is what I get: 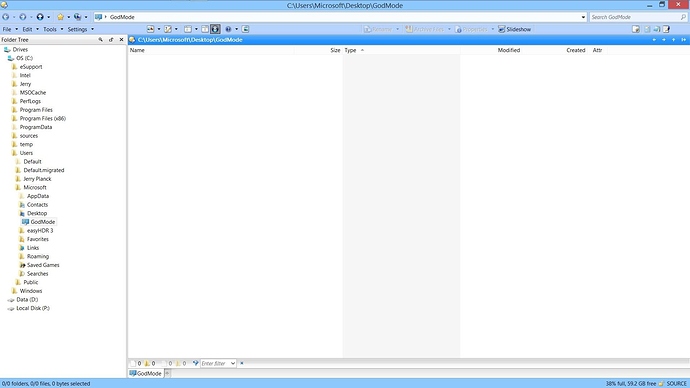 I right-clicked the GodMode folder, selected Properties, and set everything to Default. It still doesn't open the screen you sent.

Could this have something to do with administrative rights? My user account has them but when I right-clicked the created GodMode icon, it doesn't have the option to open as administrator.

Sorry to be such a pain-in-the-butt. Especially the day after Christmas.

I don't know, to be honest. The misnamed "god mode" stuff isn't even a supported feature of Windows, let alone Opus, and it's always had issues since people discovered it (even crashing in some cases, in Explorer not Opus, as it was never intended by Microsoft to be used the way it's being used; it exists to enable Control Panel searching, not browsing).

I just used Create Folder on the toolbar in Opus, pasted the name, then double-clicked the folder and it worked.

There would not be an administrator option on a folder; that is only there for executables.

Your suggestion was spot on. I went to Preferences/Launching Opus/Explorer Replacement and selected "Replace Explorer for all but the following folders". I then added the GodMode folder created on the desktop to the list box. It now works perfectly.

Thanks so much for your help and time!

Leo, I can't get GodMode to work from within Directory Opus. Here is what I have tried so far: As you can see, there is nothing showing on the right. I tried doing what "Jerry Planck" did, by adding the exception in my Preferences > Launching Opus > Explorer Replacement, but it still doesn't work. This is what the exception entry looks like:

I also tried doing what you did:

Adding the exception won't change what happens inside of Opus. It'll just mean that launching the folder outside of Opus -- e.g. from a shortcut to the folder on your desktop -- will open the folder in Explorer instead of Opus.

I'm sorry, I'm not sure of what you're saying. What I am trying to do is set it so when I double-click on the GodMode icon on my desktop, Directory Opus will open up with the list of Control Panel options instead of Explorer, like what you had showing in your picture.

You don't want to exclude the folder then; that does the opposite of what you're trying to do.

I don't know why it isn't working by default on some machines, while it seems to work on mine. As I said earlier in the thread, "God Mode" is not a supported feature of Windows, it was something people found by accident and have been using in a way that Microsoft had never intended. It has always has problems and quirks as a result, including crashing Explorer on some systems (without Opus even being on the machine). It not working in Opus for some people is probably just another one of those quirks, but since it's not an intended feature of Windows we can't really expect Microsoft to fix it either (unless they recognise its popularity and make it or a replacement an official thing).