The lister which I last used before shutting down my PC is opened approximately 20 times when I reboot my PC. This of course is very annoying.
I have no idea where this comes form.
When I close all lister windows and then open a new lister it only opens one lister.
I would very much appreciate technical support, so that this problem may be solved.
Greetings, Martin de Groot, registered Directory Opus 11 PRO user.

If you make sure there's only a single window open, and point it at an unusual folder, then reboot, does that same folder get opened 20 times, or is it the original folder?

What happens if you turn off Explorer Replacement. Do you still get 20 Opus windows, or do you get some Explorer windows instead?

If you bring up Task Manager, what's shown on the Startup tab?

Listed on the Startup Tab of The Task Manager:

I hope this may help you to find out more about my problem.

Could you post screenshots of the pages under Settings > Preferences / Launching Opus so we can see what's configured to open at startup and so on?

(If you push Alt+PrtSc to copy the active window into the clipboard, you can Ctrl+V into the forum post editor to upload the image into your post.)

Hello Leo and others, here are the five pages under Launching Opus preferences: 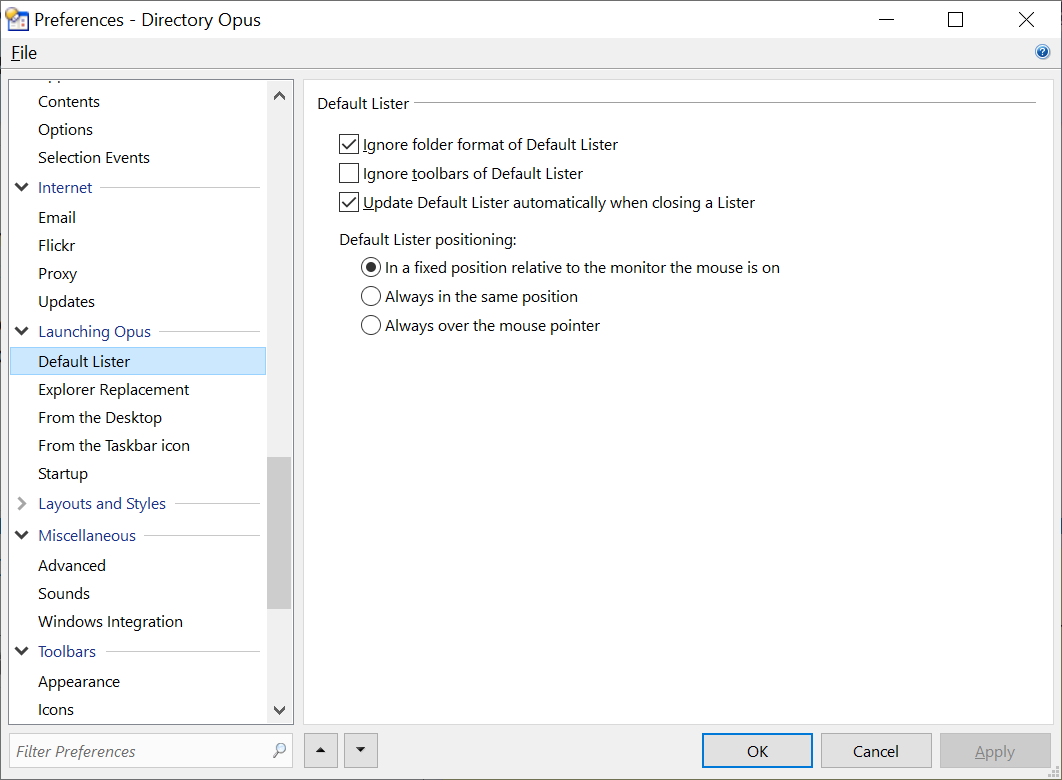 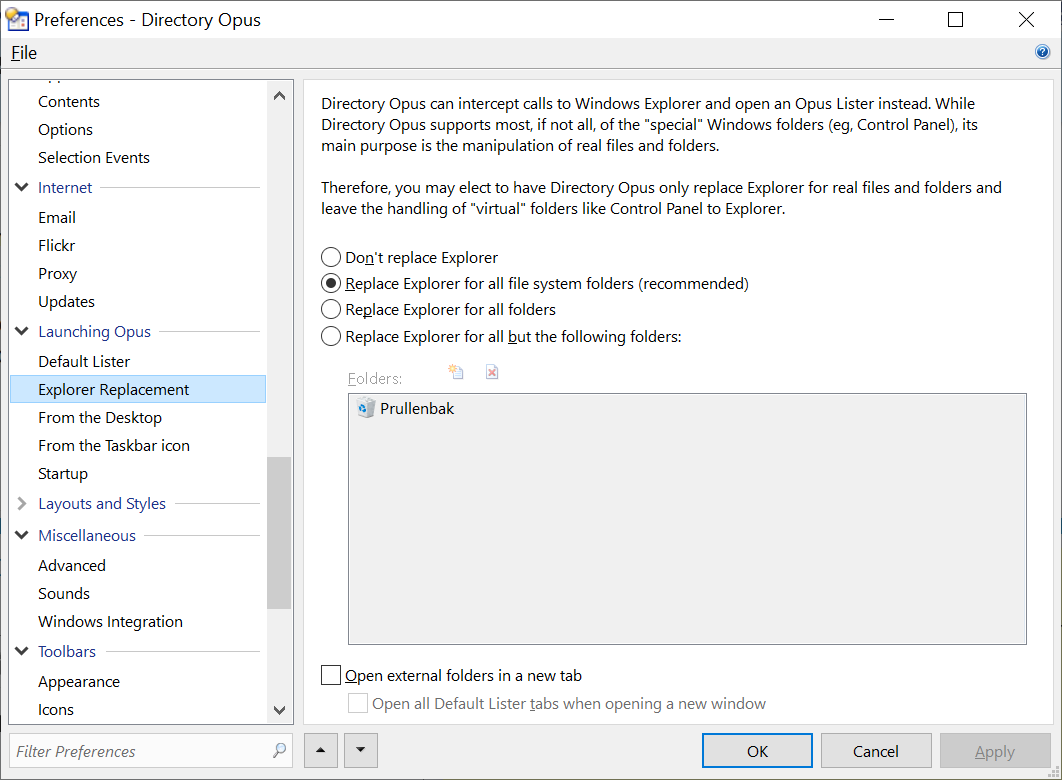 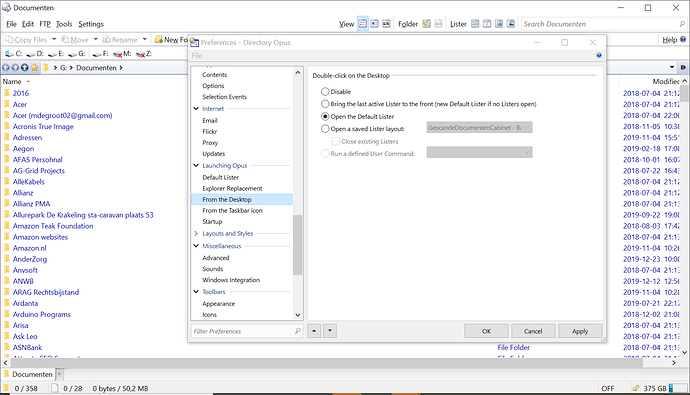 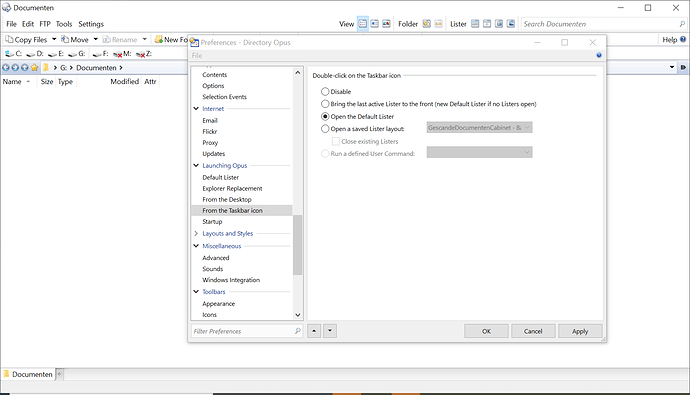 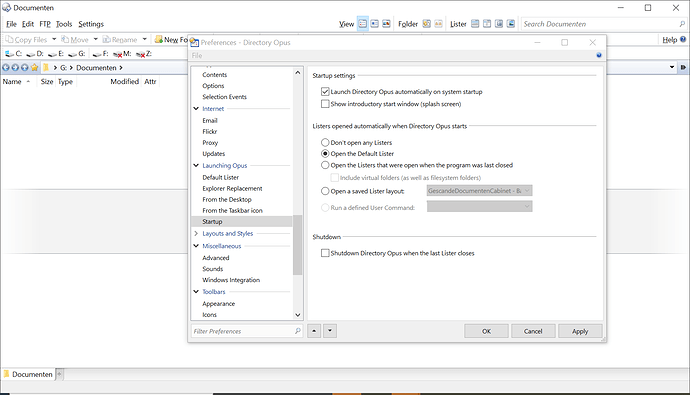 The problem is still preseht, clicking on the taskbar Directory Opus icon pops up the 20 opened lister windows of the default lister, but I cannot make a screenshot of it because this popup disappears the moment I make a screenshot.

You mean it looks like there are 20 windows open but when you take a screenshot they all disappear?

After the screenshot, the list of 20 opened lister windows is still present, and pops up when I hover the mouse over the Directory Opus icon in the taskbar, and I can open any of these lister windows by selecting it from the popped-up list.

Here I try to paste a screenshot of the opened windows:
A portion of all the opened lister windows should be visible in this screenshot: 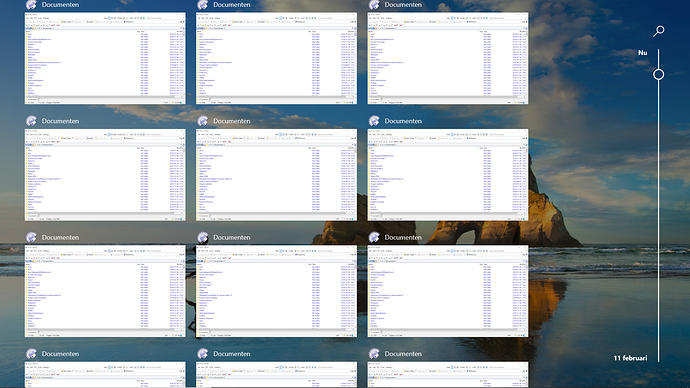 Very strange. Your Preferences screenshots all look normal, and none of those settings should cause multiple windows to open.

Could you send us a backup of your config? Maybe if we load that into a test system it will recreate the problem. Here's how:

Also, please let us know the version you're running (11.x.y) from the Help > About dialog so we can try with the same one.

Based on your config, this should fix things:

Now restart Opus and everything should be fine, unless you import the same config again (since all the open windows are stored in that config file). Re-saving a new config backup after restarting Opus should fix the config problem as well.

Hello Leo, I followed your instructions in the previous message exactly, but it does not stop the problem of the multiple lister windows. I will send a private message with a new configuration-backup file. The strange thing is that the multiple lister windows do not always appear, only sometimes. But I cannot figure out what the conditions are under which the lister windows do appear.
A short while ago ( half an hour) I had the following situation: I closed all the lister windows with the menu-item, then I watched new lister windows being added immediately after that. They don't appear all at once, but one after the other, with a few seconds in between. Please help me to get rid of this, I would really like to have a normal working Directory Opus again!

Please try turning off Explorer Replacement (and leave it off), then follow the instructions in my last post again.

Do the windows still open?

My suspicion is that something external to Opus is opening them, and then (if they aren't closed before exiting / shutting down) they are being saved and re-opened again later. When you tried turning off Explorer Replacement before, it may have stopped new windows being opened but the old ones were still being saved.

Another thing to check is this file:

That's where the open listers are stored when you exit Opus. Check that that file is actually updated (the timestamp should change) when you exit Opus (File > Exit Directory Opus). You can also delete the file if needed (but be sure to exit Opus first, or it'll just write out a new one when you do exit it).

I have turned off Explorer Replacement and have left it off, but the lister windows still open. I just counted more than 120 open lister windows!!! I have done repeatedly what you suggested, i.e. closed all lister windows, opened a new lister, exited DO from the menu item.
I have also looked at the file openlisters.oll and I have deleted this file after I had exited Directory Opus. I have even removed Box Sync, because I thought it could restore a "wrong" openlisters.oll file or some other Directory Opus file after startup. But this does not help, the problem is still there.
With Explorer Replacement turned off, it completely puzzles me why any external program would want to open more than 120 DO lister windows!!

I try to paste a screenshot here: 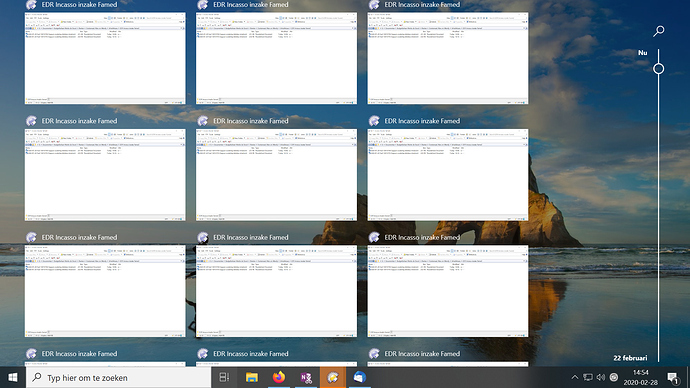 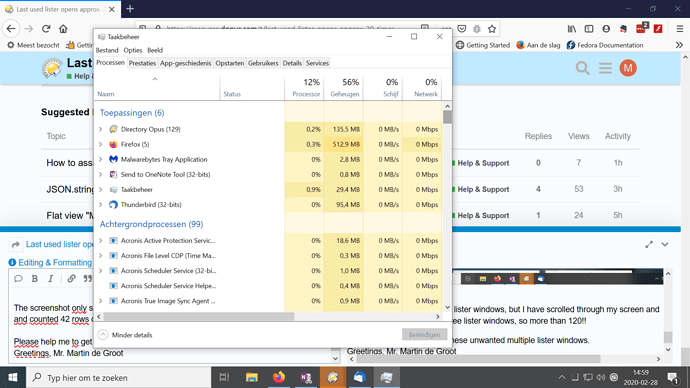 afbeelding1920×1080 284 KB
The above screenshot of the TaskManager window shows 129 applications of Directory Opus are open.

I have even removed Box Sync, because I thought it could restore a "wrong" openlisters.oll file or some other Directory Opus file after startup.

Were you using Box Sync on your user profile/settings folder?

Opus windows don't open themselves so something must be making them open, but I'm running out of ideas as to what it could be (as long as unclosed windows are not just accumulating in openlisters.oll and never being closed).

If you could create a Process Monitor log of what happens while the windows are being opened (being sure that it's not just old, unclosed windows stored in openlisters.oll being loaded), we might be able to see what's happening from that. If you do that please let us know which folder the windows were opening for during the logging period.