Can someone please tell me how I can rename multiple folders as in my example:

I would like to control the space after MovieName and the year. I have many folders with different movie names, what I am trying to accomplish is to just have the year after the name of the movies and not before.

I tried to figure this out but couldn't and would greatly appreciate any help!

Have a look in the Rename Scripting forum. I'm confident you will find at least one good solution there.

Thanks for the reply, I looked and failed to figure out how to accomplish what I am looking to do. This has turned out to be way too advance for a simple task! Can someone guide me to do what I want? That's the only feature I would be using for time being.

It's not that advanced. Have a look at the FAQ, then show us an example of what you've tried and we'll point out any errors. 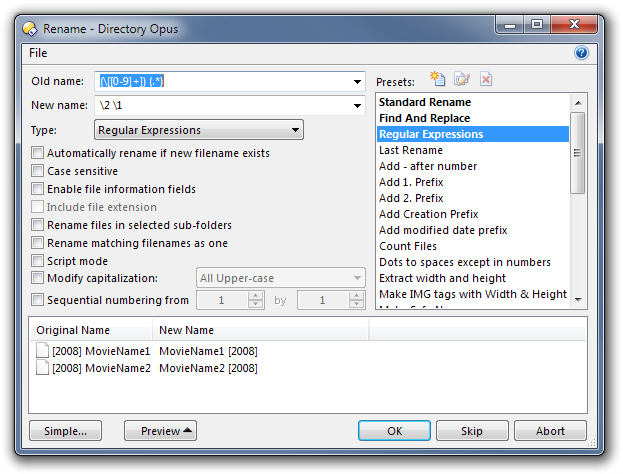 Can I ask you maybe not so tricky question to you! This would be MIND BLOWING if it can be done. I have a huge collection of MP3s. Since recently I purchased an iPod I need to rename the album names in every single songs I have within every sub-folders.

You have no clue how thankful I would be if this can be done easily. This would save all the hassle from me going through every single album and removing the year.

Awesome... Thank you so much! Now only if I can some how align the year

Various simple rename presets has a couple of very similar examples to that, while RegExp basics: Removing characters from start/end of names should help you learn the basics of regular expressions to let you modify the examples if what you want is slightly different.

The only thing complex about your example is that you have a [ character in your original filenames. Since [ has special meaning in regular expressions, you need to "escape" it with \ and use [ where you want to match a [ character (like I did in my post above). Beyond that it's basic regexp stuff.

Give it a try and we'll help you learn how to use regexps yourself.

Can't search how? You should be able to use DOpus Find to search for whatever part of the name you want.