The Rename dialog in Directory Opus lets you store presets which you can re-use to perform common rename tasks. It's also possible to import and export these presets to share them with other people. 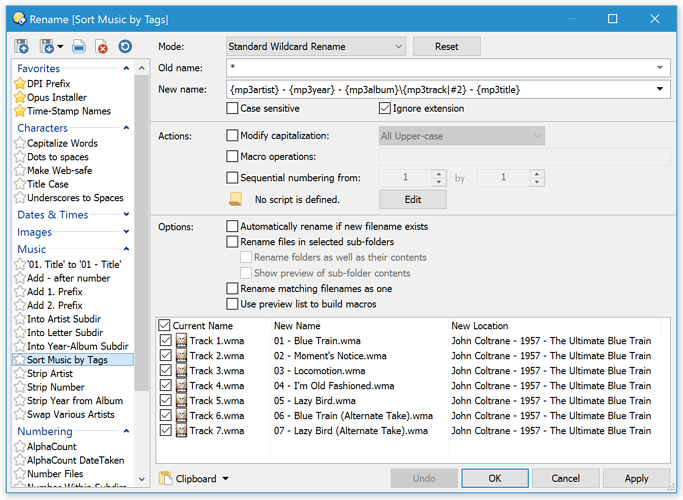 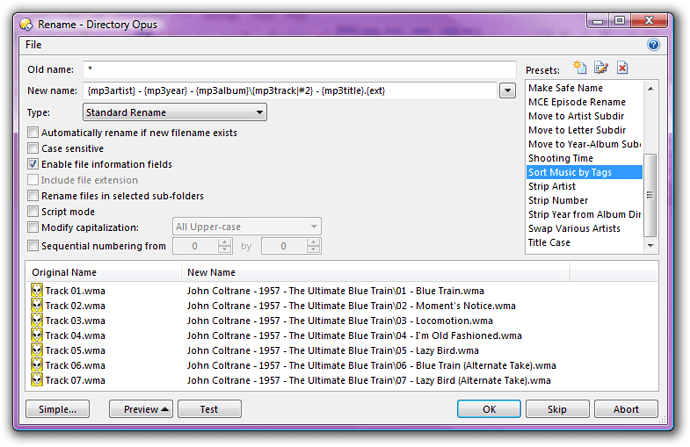 Listed below are some rename presets that I find useful.

If you just want to use the presets and don't care how they work then you don't need to type them into Opus. Instead, I've attached a zip file with each preset saved as a .orp file.

To load a preset into your Rename dialog, make sure the dialog is in Advanced mode, then select Import... from the File menu. That loads the preset from disk but only temporarily. To add it to your personal list of presets, click the Add button above the list on the right and give it a name.

Here's what all the presets in this post do:

There are a few ways you can do this.

Remove everything up to and including the first _ in each filename:

Remove the first 3 characters from the start of a filename:

In the last example the number of dots before the first bracket define how many characters to remove, so if you want to remove 4 characters you'd use ....(.+) instead, and so on.

Hi, Is it possible to create a preset which applies multiple Regular Expressions in a row, or do we have to use the much more difficult VBscript and other external languages for accomplishing that

You have to use a rename script for that, unless you can think up a way to do your rename using a single expression (which is often hard/impossible).

There's an example VBScript script in the forums that you can modify to suit your needs so the only thing you have to learn is VBScript's slightly different regular expression syntax.

The number of dots under the first bracket define how many characters to keep before your text, so if you want to keep 4 characters you'd use (....)(.+) instead, and so on.

Wow! I can't believe I didn't' stumble on this post before. These presets are incredibly useful!

I have tried to tweak a couple of them to suit my needs. For the "Swap Artists" preset, I changed it so that it would just swap words between a dash (as long as there is only one dash). So for example, if I have a book named "Lewis Carroll - Alice in Wonderland.pdf" it would change it to "Alice in Wonderland - Lewis Carroll.pdf". So I tried the following:

It works, but the problem is that the extension is also swapped, so that it results in:

Is there anyway for me to change the code so that I can avoid swapping the extension?

Just in case anyone else is interested, solution can be found here:

Hi all, I've searched everywhere and wasn't able to find a renaming script that can delete the first word in a filename. I have a "crop at position" button that someone kindly posted on the forum, but you must specify the number of characters to be c…

(2017: Also note that with Opus 12 you can just turn on ignore extension to avoid having to worry about the file extension when changing the rest of the name.)

Could I please get a recipe for replacing all dots, dashes, m-dashes and underspaces with a space?

Perfect! And how to avoid multiple spaces leftovers?
The current formula will convert [ - ] into [___] instead of [_] .

That's because it isn't looking for space.

Actually, there's an easier way to do all of this these days: 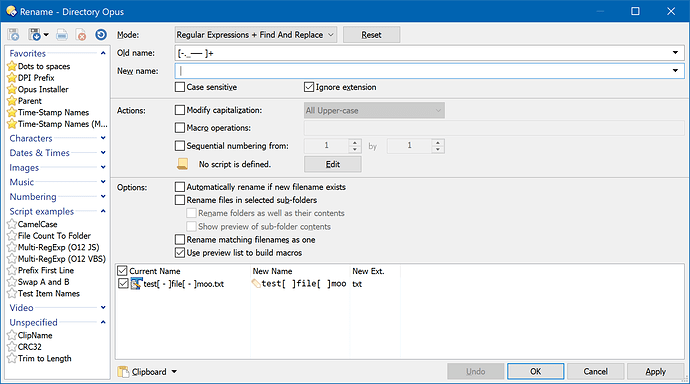 Set the mode to Regular Expressions + Find And Replace.

For Old Name, enter [...]+ where ... are whichever characters you want to replace or coalesce. (Remember regex rules: If you want to include a - character within [...] it has to be the first character, to avoid asking for a range like [A-Z]. Sometimes special characters need escaping with a \ as well.)

For New Name, enter the character(s) you want to replace the matches with. (Space or underscore or whatever you want.)