Hi, I'd like to rename all of my image files. I'd like the directory structure to be pretty simple. I'd like folders for the month and year and then all the files for a particular month in in the same folder.

I really don't have a clue about regular expressions so could someone help me?

Also, I understand how to rename files using EXIF data - but is there a way to use the actual day of the week instead of the date number or in addition to.. such as... 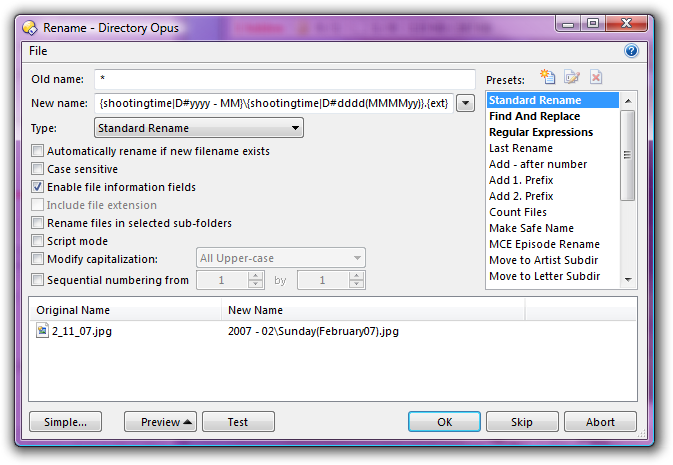 By the way, if you paste that string into the rename dialog it will strip out the two | characters so don't forget to add them in. (You can type them okay, they just get removed if you paste them.)

Thanks for the information. That wasn't exactly what I wanted but I was able to modify yours.

Here's what I ended up with. 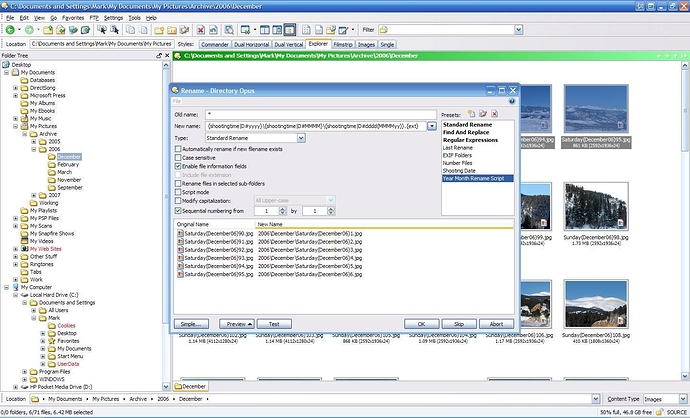 See this thread as well:

One button to move files to a new folder Help & Support

Hi, I’ve been having some fun over the past couple of days creating new useful buttons, but there’s one to help organise my photographs that I’m stumped how to do myself. I’d like to be able to select some files, and then click a button that will po…

The third post (the first one by me) in the thread has a button for moving the selected images into a sub-directory, prompting you for the directory name and using the first image's EXIF date as the default.

Hello,
...works well, but what shall I do with ORF-RAWs.

I've many ORF beside Exif-JPEG, which together where taken and named equal.
Once I did see a post about reading {shootingtime} from JPEG to rename the ORF with, or somewhat similar doing.
But I can't find this post. Is it a dream or truth...?

Is someone able to create a button or script to do this...?
I'n not familar with scripting, but need this for renaming thousends of pictures.

If you want to rename raw files like ORF using metadata then I would use the free ExifTool utility with Opus to do so, that's what ExifTool is made to do. However figuring out the exact syntax to use for ExifTool can be rather intimidating so instead I'd use GeoSetter, which is another free program that also uses ExifTool, and let it do the hard work for you.

Below are a couple screen grabs where using GeoSetter I quickly renamed a couple ORF files and a DNG to the date and time they were taken.

Thank you John.
I know Exifer and other tools to rename with. But it's cumbersome. If I reorganize, sort, rename and move files, I will not change the tool for the jobs. I want to do all together with DOpus.
So I will do it forthermore in OlympusStudio, which renames JPG and ORF in a comfortable way on one batch. A DOpus-Button would be the simplest way to work on this.
I have to change my workflow unlikely.

Opus will support EXIF in RAW images in the next major version, but in the mean time a third party tool like the one suggested is the only way to do it.

I do need the reorganize now. Next major version is too late. But it is a big step, because Dopus gets to be my favorite picture-tool.

I know this is an old thread but wanted to chime in.

I also needed something to organize photos better and stumbled across this when debating working on a more complex tool. I ended up using leo's format string slightly tweaked for my needs.

If none had asked, I would have never seen this. Plus it amazes me more what Opus can do (with the right knowledge).