I've noticed that the "insert" key behaves quite strangely in DOpus. Even though it advances to the next folder, it doesn't actually SELECT the folder where they cursor was. Only when I press "insert" again does it start selecting. Didn't find anything related to this in Options.

By default, insert toggles selection of the current item and advances to the next item.

If the current item is already selected, you can use ctrl-down to advance to the next item without deselecting anything.

You can probably modify the Insert hotkey so it never deselects, although I haven't tried.

Any idea how I could change the way insert works? I suppose I would add it as hotkey and... do something when I press it? Don't tell me: scripting?

Superhero Leo, I think I've understood what is the "problem" with selection in DOpus. DOpus always has a file or folder selected, while TC does NOT. In TC, you move through the files/folders and you have a visible marker but the folder/file itself is NOT selected. Therefore when pressing it toggles it. Even without a selected folder, pressing copy/move hotkeys still works in TC and I suppose it would be the same for DOpus.

So far, looking through the options, I have found no way of disabling this way of functioning.

Another messy situation with in DOpus is that once you use the arrow keys / pageup or pagedown, you lose your selection. This does not happen in TC. It is a quite important functionality, as it allows me to go through very large folders, select stuff, and still be able to navigate.

I've looked a bit through the Scripting Reference and I also downloaded a few sample scripts from the Forum.

I'd like to make a script which, when is pressed, would add the selection to an array and keep it there until the folder is changed. In this way, I could simulate TC's selection mode.

Could you please give me a few pointers of where to start? I'm a software developer so you can get technical

As far as I see in the scripting reference, there is no event for "OnKeyPress". This is my first problem. Another problem is that I don't know how I can keep files/folders selected after selection is lost through pressing insert or page-up/page-down.

Another messy situation with in DOpus is that once you use the arrow keys / pageup or pagedown, you lose your selection.

You can use Check-Box Mode to retain selections as you navigate through a folder. Toggle on/off using the button as shown. 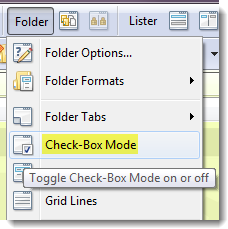 You might want to look at the Power Mode options if you are used to TC's way of doing things.

BTW, using ctrl + space and ctrl + up/down works to preserve the existing selection in Details mode, as is standard Windows behaviour. Power Mode lets you get other behaviours.

Look, I really like Directory Opus. But there seems to be nothing in Power Mode that does what I want

. I don't want to be a cry-baby, ok? I just want to make this work for me. And this is a big deal-breaker, having to press modifier keys to get selection working the way I want to. Quite simply, this is the biggest and most annoying problem with DOpus right now for me. If I make it work with Insert as selection key just like in TC, I'm 95% going to buy it

So I take it this is also impossible to achieve via scripting? I wrote a long post regarding possible routes I could take. Any thoughts on my previous post?

I really like Directory Opus and I'm quite surprised that despite all its bells and whistles, it still seems like it misses TC's keyboard functionality. Please don't take it like I'm bashing DOpus and praising TC. TC is stuck in the 2000s with so many things that I truly want to move to DOpus.

I just checked powermode and I can toggle selection with space and move up/down with cursor/page keys and on "insert" it toggles. On moving the focus it also does not deselect anything.
To me this feels like everything is there you're looking for?

Is Preferences / File Displays / Options / Automatically select first file in folder (except in Power Mode) turned on? If you're sticking with Details mode, you probably want it off.

(There's a separate, similar option for Power mode, too, if you are using that.)

@tbone: space does not advance to the next item next time it's pressed (like insert does in TC). Plus, in order to use you need to have those annoying checkboxes which wastes screen space IMHO.

@leo: yes, I already had it turned off.

I'm going to ask the golden question here: if I buy this program, could you guys do something about the "situation"? You'd have me as a user for many years probably

Are you sure you are trying all this in powermode?
You surely don't need checkbox mode for using space/insert!
You're right does not advance, but does. Maybe that's switched, but probably can be changed.

I don't really get what you are missing, there still seems to be some kind of misunderstanding? o)

We can certainly look at making changes if necessary, but I suspect everything you want is already possible.

To be honest it doesn't actually sound like you have tried power mode as suggested, since pressing space in power mode definitely toggles the selection - you do not need checkbox mode turned on at all.

Ah, right, Power mode was somehow turned off. Selection remains while using Power Mode, you're right. It even persists when you switch tabs which is AWESOME

. Damn, DOpus does have a lot going for it

. And LOL, actually insert works the exact way I want it to in power Mode! For some reason I missed that the first time around!

@everybody: yes, it was my bad!

If you want to make Power mode the default, see the Folder Format FAQ.

Thanks a lot jon!