STL and GCode viewer from Microsoft

Microsoft have released another thumbnailer and (static) viewer for STL and GCode files (both used for 3D printing), this time as part of their free PowerToys bundle: 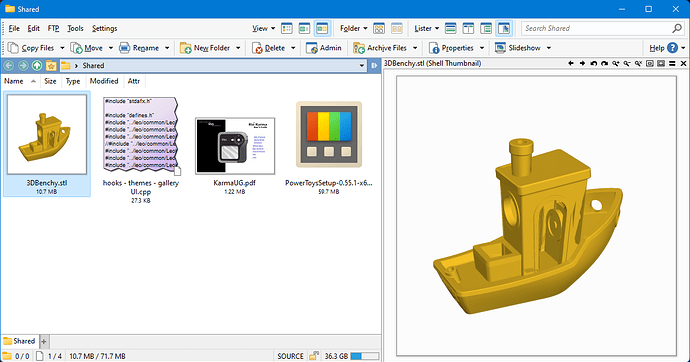 Note that the GCode viewer only works for files with embedded thumbnails, which probably means it isn't useful to that many people. (On the other hand, the STL viewer should work with any STL file, at least in theory.)

This is an alternative to Microsoft's other 3D Object Viewer. The other viewer lets you rotate the object in the preview pane, but also has some problems and seemed to be broken/abandoned by Microsoft within months of them releasing it. The issues the other viewer has depend a lot on the type of files you view and also which program made them, so you may still find it's still a better option than this one.

PowerToys also installs a PDF viewer which is terrible.

(It will only display 10 pages, renders everything at a very low resolution where text is barely readable, and does not render properly when you scroll some documentes.)

If you install PowerToys for its other functionality, we recommend disabling the PDF viewer part of it. You can do so from PowerToys itself, or you can do it for just Opus (and also assign PDF back to some other viewer) via Preferences / Viewer / Plugins and configuring the ActiveX + Preview + Office + Web plugin, which acts as a proxy for preview handlers in general.