I want to follow-up on my earlier post regarding my Slow Lister On Initial Load.

It appears that one of my newer toolbars, normally showing on my lister, increases initial lister load time from under 2 seconds to about 15 seconds. If, after removing the toolbar, I restart my system, then interactively add back this toolbar, it takes about 12 seconds before it will show up. If I make this toolbar part of my default, then the initial lister load time (shortly after a system restart) increases to about 15 seconds.

This particular toolbar has 7 buttons, but one of the buttons is built like a flyout menu system containing over 150 program (exe) files , all of which are on my computer. The toolbar looks something like this: 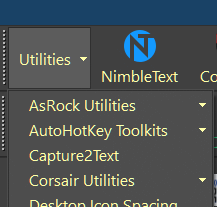 and includes about 20 icons among the 150 menu items.

Can a particular item / image in the toolbar button be causing the issue, or is it just that I have too many items? Is there a recommended toolbar item limit?

Do those buttons have icons set, which are coming from the various exe and dll files?

Windows (unfortunately) loads icons from exe and dll files in a way which causes most antivirus scanners to scan the files (since it opens them for potential code execution, even though it's only going to read the icons out of them and not run any code). Realtime antivirus scanners also tend to block threads, or sometimes the entire process, while they scan things. Although good antivirus tends not to re-scan things it has already scanned recently, not all do. (Defender is particularly bad, in my experience.)

As you correctly mentioned, in my case the initially slow lister startup appears to be due to having several hundred exe (executables without the icon image enabled) items in my Dopus menu toolbar button(s), with most in my downloads\sysInternals folder. Using ProcMon64.exe, I can see that the sysInternals items being scanned by the Msmpeng.exe (Microsoft Malware Protection Engine) during the lister startup. Adding a temporary antivirus exclusion for this folder, eliminates the lister startup delay.

Given that dragging a shortcut to a Dopus toolbar generates an actual exe command:

Is there an alternative way to tell Dopus menu buttons to automatically use an actual shortcut (when provided) instead of an Exe?

Something to try, if you don't want the icons and they seem to be slowing things down: