I've added a note to the root post as a heads-up for an issue that a few people have run into:

Note: Installing this plugin will cause Opus to treat PDF files as images; specifically, PDFs will be included in the viewer's next/previous file list, which may be unwanted. --Leo

Update: Newer versions of Opus now prevent this from happening, so you can ignore this note as long as you're on the latest version (Opus 10.5 at the time of updating this).

Hi all, I just wanted to check in here and see if EXR support was still something being looked at. It would send my heart all a-flutter, it would.

Have a great weekend, one and all!
Steve

I (still) use Ulead/Corel PhotoImpact a lot. The Ulead file format for saving files with 'layers' is .UFO (Ulead PhotoImpact Image).
Only the internal Ulead browser gives me a preview of the UFO files. Would it be possible for Universal Graphics Viewer Plugin to
also show previews for UFO files in Opus? It would help me a lot

Apologies for the delay replying - I never got a notification e-mail saying someone had replied.

I'm really busy working on another project and consequently don't have much spare time at the moment to work on the plugin, so EXR support is unlikely in the near future. If I get some free time and have the inclination I may have a look, but no promises I'm afraid.

I have finally got this working (I have thousands of .eps file from six calculus textbooks that we have written), but it was a drawn-out pain, because not being a techie, I didn't understand the Ghostscript bit. For any others who may be struggling:

The original download links are not working at the moment. For the moment, you can download the plugin from:

To install, just extract the contents of the ZIP archive to the Directory Opus program folder (usually C:\Program Files\GPSoftware\Directory Opus).

It would seem the reposts plugin links are dead. Any chance for a reupload?

(I thought these were already here, but on closer inspection they were only visible to admins.)

Hi, I'm attempting to use this plugin to preview DDS files through directory opus. Previously I was using the Nvidia DDS viewer but it seems to not work anymore.
Attempting to view DDS files through this program makes them look corrupt through the preview, you can get a sense of what it's supposed to be visually but only vaguely, with little to no colour information to be gleamed. If anyone knows how to get proper DDS support for Directory Opus, I'd be much appreciative.

Not an expert on DDS but it might be a newer version of the format which the plugin doesn't understand, as I think the format has changed once or twice over the years.

If there's a DDS preview handler which works with File Explorer's viewer, that should also work with Opus.

Failing that, Opus has a plugin API which would make it simple to write a newer DDS plugin if you have code which converts DDS to a standard bitmap.

My recent experience is .dds files are often misdisplayed. Perhaps because there's so many ways data can vary per channel in .dds files. I've had Nvidias .dss tools misdisplay .dds that Paint.net got right.

I'm stopping by the thread because I'd love to read some ancient .cin Cineon files. And .dpx would come in handy. Too bad .exr never made it in.

It should still work. It's just two DLLs that need dropping in a folder so it's easy to try out with the formats you want to check, and if it doesn't work you just need to delete the two DLLs again.

(Use File > Exit Directory Opus, and delete them using File Explorer, if the DLLs are locked.)

What should I see in the plug ins list? UGV something? Multview was the only plugin listed unchecked? Raw Digital Camera?

I tried opening a .cin and a .dpx and it just popped up a windows "Open in" dialog.

It's late here in BC I could be just doing something dumb.

It should then appear in the list like this, if the DLLs are in the right place: 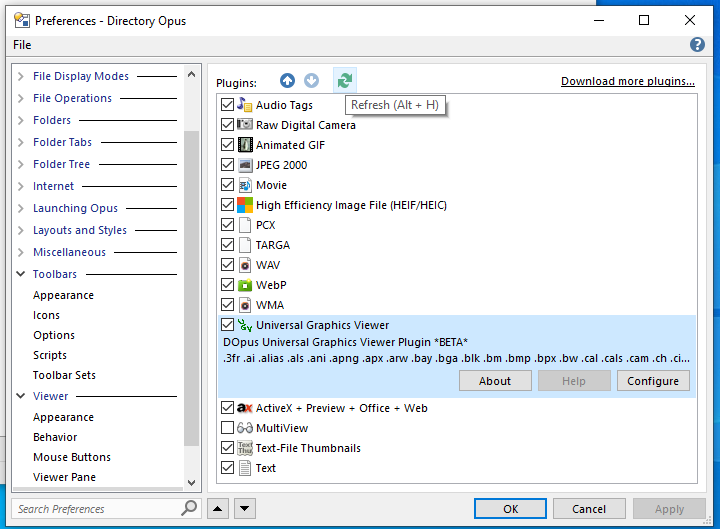 That sounds correct. (The x86 ones would only be used if you do a USB export and want to run it on a 32-bit system.)

Been really busy with other things, but hope to update the plugin soon with HDR, EXR, and .dpr and .cin support, and other improvements. I may also switch graphics libraries, and do what Leo did with the DCRaw plugin, and re-factor/improve it.

As all developer's say - can't promise anything, but it's on the TODO list.

P.S. The winking emoji on the forum isn't the best. Each to their own though.

That did the trick! I was able to open a .dpx file into the standalone/floating viewer. But the colors are quite washed out. But I know the conversion from 10 bit log to linear color spaces is fraught with challenges.

Thanks for the comments ZwickySoft, I figured this was a long forgotten about plug in and never thought there was any chance of an update now. But yeah, if you could add .cin or .exe that'd be fantastic. Cineon is almost never used today, but is important for historical reasons, some classic color calibration images can be found in that format, so reading them and reading them with correct color space conversion would be fantastic. Granted I believe professional apps like Nuke and Da Vinci Resolve will read them and handle the color conversion in proper ways. So for accurate historical purposes those are better used. But just being able to see the contents from DOpus is a nice feature. I believe .dpx is a more modern variation on .cin, so the code to read .dpx may not need significant changes to read .cin. IANASD (I am not a software developer), so I may be trivializing a challenging coding project.

Open Exr .exr format is a very important current file format for professional use, so that's probably a lot more important than Cineons.

Anyways, thanks for the help, folks. I'd Paypal you a coffee/beer (or two!) if you do update this plugin Zwiky!

Can't get .ai files to be shown in the Viewer Pane with this or the PSD Codec plugin. Plugin is enabled in the settings etc. Any ideas what to check?

Adobe Illustrator files sometimes work if you assign them to the PDF viewer (via the ActiveX+Preview+Office+Web plugin in Opus, which acts as a proxy/adaptor for other types of viewers in Opus).

It depends on the PDF viewer in use, however, and I haven't tried it in a while.

Got a new viewer plugin and text editor plugin for Opus in the work's, that should work probably work with a lot of format's.

Can you upload the .ai file that doesn't work, so I can test ? or message me if it's private.