Add the current date and time to a file's name

Summary: The rename and create-folder functions in Directory Opus are able to include the current date and time in the names they create.

If you've got a file, say one with a generic filename or one that's a backup you just made of a directory, then you might want to rename it to something unique which also captures the current date and/or time. You may also want to make a quick temporary directory using the current date without having to think of a unique name. You can make toolbar buttons (or hotkeys) in Opus which do these things in a single click.

This first button creates a new directory which is named after the current date and time:

This second button will rename all of the selected files and directories by adding the date and time after their filenames. Its function body is two lines long because the first line handles the directories while the second line handles the files (making sure to add the date before the file's extension):

In both cases you can edit the {date|...} and {time|...} parts of the button to alter the format of the date and time and, of course, you can remove either of them completely if you want.

Opus 12 and above: The second button could be done better, using a single line which handles both files and folders, using the new Ignore Extension rename feature. In fact, this improved version is provided for you within the default configuration, as mentioned at the top of the post.

You can also do the same kind of rename using a Rename Preset as shown below, instead of creating a button.

Before Opus 12: Don't forget to turn on the "enable file information fields" checkbox, else the {date} and {time} codes won't work. (This is done automatically from Opus 12 onward.) 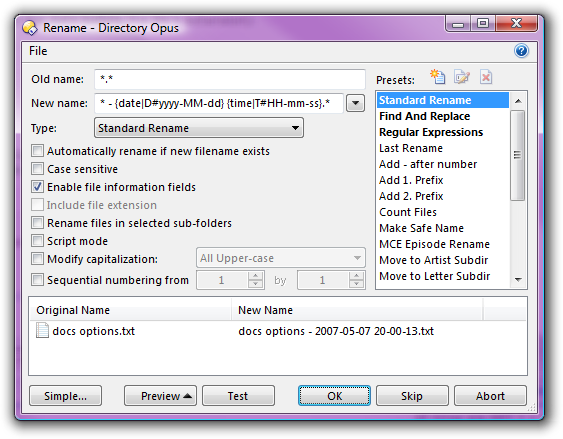 Thanks for this. Both these button/scripts will be very useful for me.

Can you provide modified versions of these buttons that add the date to the start of the folder in this format 2015.11.07? Maybe adding the time could also could be made optional.

See Codes for date and time.