Can we enable previews of Email (.msg) files Preview in Preview Pane, when those files are copied from Microsoft outlook, as an archive ?. It helps to search the right email from the archive bunch, copied in a folder.

Do you mean you aren't getting .msg previews at all, or are they working for normal .msg files but not .msg files you try to view inside of archives?

Or are you trying to view the archive itself?

I am not getting at all. By archiving I mean a drag and drop of an .msg file.

Do you have Outlook installed?

How to use Opus viewer to view Outlook .msg? Help & Support

If a .msg preview handler is installed on your system, Opus will use it. One comes with Outlook, but if you don't have that, another alternative is Quick View Plus. There may be others out there, but I don't know.

If Outlook is installed but .msg previews aren't working, check in Opus under Settings / Preferences / Viewer / Plugins. Select the ActiveX + Preview + Office + Web plugin and click Configure. That will show which preview handlers are installed on your system. It's possible there is a .msg handler there but the file extension isn't assigned to it; if so, you can fix that there.

A post later in the linked thread says you can also use the Windows Mail preview handler if Outlook isn't installed.

Hi Leo, I checked as advised. Below is the image from Opus window. 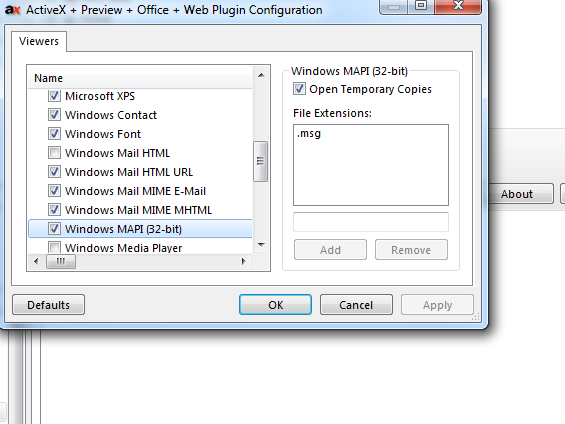 Also, I have outlook installed on my PC.
But when I click on the .msg file, below message appears and no preview is displayed.

Do .msg previews work in File Explorer? If they don't work there either then the .msg viewer in your system isn't working properly. Both Opus and Explorer display .msg files using whichever preview handler is assigned to the .msg extension. It's not a component of Opus itself.

That error message sounds like Outlook isn't configured. Have you tried doing what it says and making Outlook the default mail client? (Either way, presumably you see the same message if you do the same in File Explorer? The message is coming from Outlook, not Opus.)

You could try assigning the .msg extension to each of the other email-related preview handlers in your first screenshot to see if any of them can handle the format. Sometimes more than one can and the extension isn't set to the best one. (After moving the extension and clicking Apply, close and reopen the viewer pane in Opus to test the change.)

I had the same issue. After a bit of digging, I found that the 64-bit version of Outlook can't preview .msg files in Explorer, and you have to have 32-bit installed:

That's quite a strange thing for Microsoft to say, since it's categorically untrue.

Both 32-bit and 64-bit preview handlers work fine on 64-bit systems. I'm guessing they're just broken the 64-bit version of their preview handler in some way.

A post later in the linked thread says you can also use the Windows Mail preview handler if Outlook isn't installed.

while I have the Windows MAPI (32-bit) previewer installed and working in Dopus, it doesn't work that great (it is kind of slow and leads to focus problems with the main Dopus window). Therefore, I tried the alternative Windows Mail HTML previewer as mentioned above . However, this one doesn't work. It only shows the source of the *.MSG file as text.

Am I doing something wrong, and/or are there other *.MSG viewers that work in Dopus?

Picking up this thread. I have a similar issue.

I can confirm that the native .msg previewer in W10 only works when Office 32bit is installed and not on the automatically installed 64bit version. Which is kind of weird. I had to do a few reinstalls of Office for my coworkers to make the .msg preview going.

In Dopus .msg preview (based on the native W10 explore preview) is working but way too slow to stroll along a list of .msg files in a folder. Each time 5 tot 10 seconds is needed to generate the preview. In an other dual pane explorer that I tried out (xplorer2) the preview went way faster because the application had two modes: some kind of internal preview which went very very fast, and the native preview, which was as slow as it is now. In the preview pane you could each time opt for the kind of preview you wanted, native of other.

So here my question: is there a way to enable a same "non-native but faster" preview for .msg files

And if so, then there might be a way to install Office 64bit and yet have .msg preview.

Ps: Enjoying your application every minute. Keep on the good work.

You should complain to Microsoft that Office 64-bit doesn't install the MSG viewer properly if it's broken there.

(I've no experience with the 64-bit version of Outlook, as I don't use it at all these days, but there's no reason the 64-bit version can't either install a 64-bit viewer or install the same 32-bit viewer as the 32-bit version. Both 32-bit and 64-bit preview handlers will work in Explorer and Opus on 64-bit systems. I suspect Microsoft just broke something, which may be as simple as some registry settings they haven't set correctly. Adobe used to make similar mistakes and it was very easy for them to fix once they were told what they were. MS have less of an excuse, since they wrote the OS and the preview handler system was literally designed for Outlook, but they seem to be dropping the ball a lot lately.)

If Microsoft's viewer is slow even when it works, including in File Explorer, then that should be reported to Microsoft as well so they can fix it.

Outlook is an enterprise application that people rely on for work, and companies pay a lot of money to licence it, so Microsoft should be fixing these things, if people report them.

We didn't write the MSG viewer; we merely allow it to be used within our Window, so we don't have much knowledge specific to it.

There may be other MSG viewers or preview handlers out there but I've never looked myself so I don't know.

Only adding here that the *.MSG preview in Windows Explorer is legendary unreliable, and practically not fixable if broken (I have tried so for literally decades without any reproducible success).

The internet is full of threads for this dreaded issue, but all without any consistent solution, if at all.

It is registered as the standard .msg previewer in W10, but until now I cannot get it working under Dopus12. Any ideas?

Does it show up in the ActiveX + Preview + Office + Web plugin's Configuration dialog? Is the extension assigned to it in there?

It's in the third place. 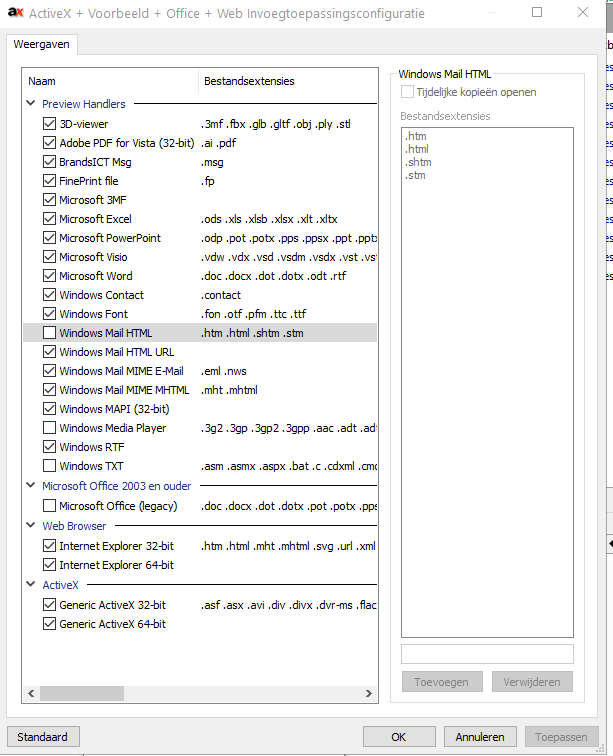 What do you see in the viewer when you select a .msg file? 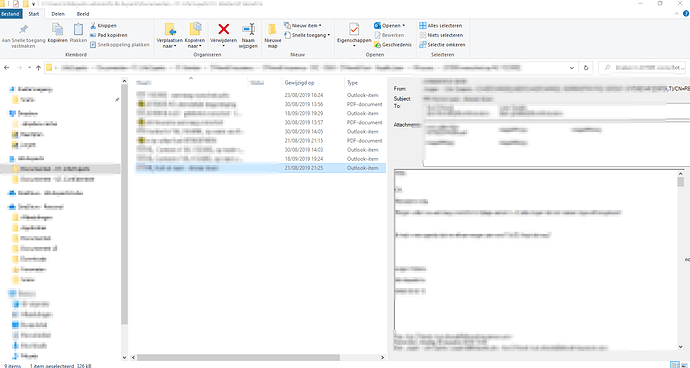 WHAT A FIND, Jr. !!
Will definitely try this.

I just was going to add that the MSG preview (via Windows MAPI) still works perfectly fine on a second PC of mine. That PC is actually a clone of my first PC on which the MSG preview, as posted above, has stopped working a few weeks ago...

Different from what I wrote above:

while I have the Windows MAPI (32-bit) previewer installed and working in Dopus, it doesn't work that great (it is kind of slow and leads to focus problems with the main Dopus window).

...the Windows MAPI (32-bit) previewer works very well at the moment and is also super fast in Dopus on that second PC: 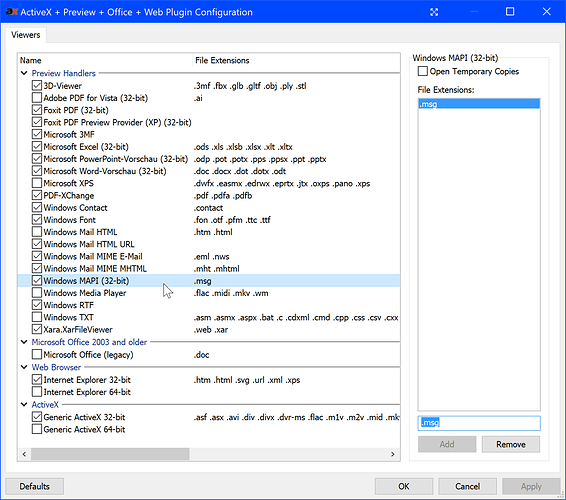 My Outlook version (on both of those PC's) is the following: 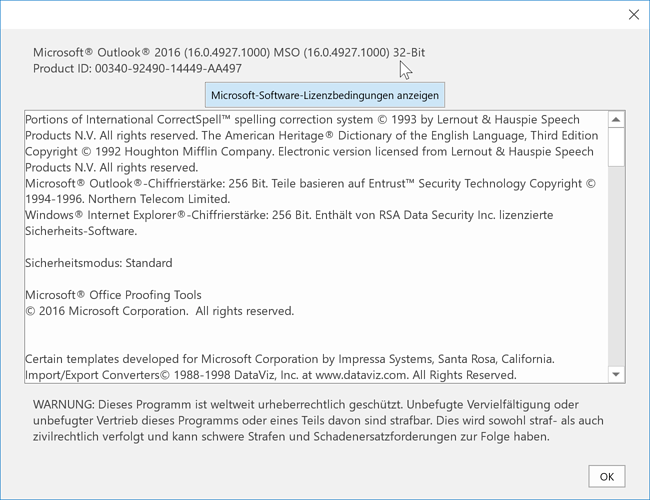 Can you keep me/us posted please on your findings. I have deactivated the brandict previewer because not working in Dopus, and my workflow is around Dopus as a first priority. I'm very curious…;

It is registered as the standard .msg previewer in W10, but until now I cannot get it working under Dopus12. Any ideas?

I've added some workarounds for bugs in that viewer which will allow it to work in the next update.